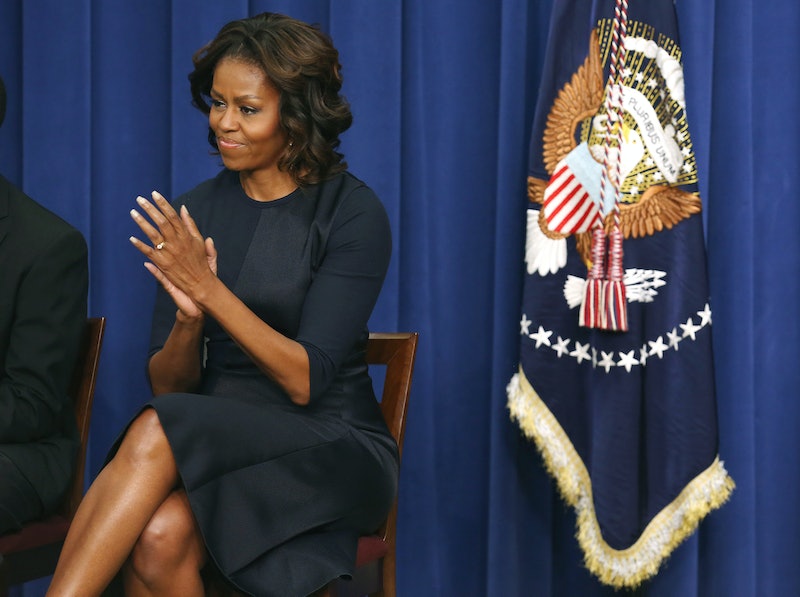 It's been a tradition since the Reagan administration: presidents invite certain guests to reflect and illustrate the various issues they discuss during the State of the Union. So who will be sitting in the hot seats this year? Boston Marathon bombing survivors, an openly gay basketball player, an entrepreneur, and a firefighter will all be present — a hint that we can expect President Obama to address national security, education, assistance for innovation, response to natural disasters, and gay rights.

Last year, the president spoke about the need for tougher gun legislation, and his guests included family members of the victims of the Newtown, Conn., school shooting. There's been a lot of speculation about what this year's address would bring — some have suggested whistleblowers, female combat veterans, and ex-Obamacare critics.

"If I were advising the president, I would recommend he try to calm the growing animosity toward the [healthcare] law by apologizing to those who have lost their coverage and inviting a former critic, especially someone with a chronic medical condition who now is able to get health insurance through the exchange," Grace-Marie Turner, the president of the Galen Institute, wrote in the opinion pages of the New York Times.

"The disruption the law is creating to our health sector and economy is extensive, but the president could single out a few people representative of those who may even reluctantly have been helped by the law."

William K. Black, an associate professor of economics and law at the University of Missouri–Kansas City, suggested a whistle-blower from the bank industry. He writes:

"Erika Brown revealed Bank of America’s orders that its employees lie to homeowners to encourage foreclosures ... If President Obama invited Erika Brown to be his guest at the State of the Union, he would signal an end to the administration’s hostility toward whistle-blowers. The president should use his address to praise her courage and to encourage others to follow her lead -- and he should create a new website and phone bank so that whistle-blowers can come forward with evidence of fraud."

It was announced on Monday, however, that Obama's guests will include two survivors of the Boston Marathon Bombing, Carlos Arredondo and Jeff Bauman; Joey Hudy, a young Intel intern; Kathy Hollowell-Makle, the Washington, D.C. teacher of the year; Gary Bird, the fire chief of an Oklahoma town ravaged by a tornado; and Jason Collins, the 12-year NBA basketball player who publicly announced his homosexuality last year.

According to the White House's description, the Intel intern "first shot to fame in 2012 when, at 14-years-old, he attended the White House Science Fair where the President took a turn using the contraption he had made — the 'extreme marshmallow cannon', and launched a marshmallow across the East Room."Noted.