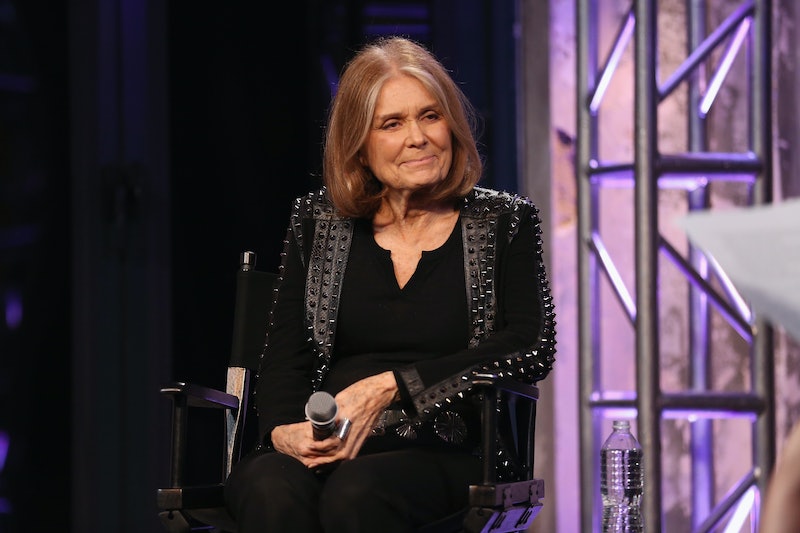 It’s a popular party game question: What would you bring with you if you were marooned on a desert island? Which albums, which films, which food — and which books? Now, Gloria Steinem has got in on the game, and given us the ultimate desert island reading list. Steinem originally shared her top 10 books to T magazine, as part of the One Grand Books series, and her picks are just as varied as you would imagine. For someone who loves traveling as much as Steinem, being stuck on a desert island would be the worst — but at least with this selection of books she could read herself anywhere she wanted in the world.

Of course, Steinem admits that her first choice would be a book on “edible plants and building a raft,” which is a pretty good idea. After all, how many of us instinctively know how to survive on a desert island? Yeah, not many. We’re going to need some instructions.

But after getting the manual out of the way, Steinem has a rather beautiful reason for picking the next 10 books on her list: “for the pleasure of big and new understandings.” That pretty much sums up the joy of reading: opening up your mind to new worlds and new realizations that can change everything . She’s so wise; if I ever get stuck on a desert island, I think I want to bring Gloria Steinem.

So if you’re looking to maroon yourself on an island any time soon, or just want to sound intelligent next time someone asks you the question at a dinner party, here are the books Steinem would bring with her — and some of our thoughts on her reasons why each one made the cut.

1. The Mermaid and the Minotaur by Dorothy Dinnerstein

The qualities that we now call "feminine" haven't always been assigned solely to women, and The Mermaid and the Minotaur makes a powerful case for bringing men firmly back into the domestic sphere, specifically in terms of raising children. Gloria Steinem even thinks this book holds "the key to world peace".

2. Exterminate All the Brutes by Sven Lindquist

Steinem's My Life on the Road is filled with her experiences of learning through traveling, so it's no wonder she was drawn to this travel book. The author, Sven Lindquist, takes the author on a journey through Africa in order to prove that racism was invented to justify colonialism. Powerful stuff.

In Steinem's words, Ayi Kwei Armah "re-defines history" with this novel. This description of an un-invaded Africa is told in a communal voice; by a whole people rather than one individual.

Gloria Steinem particularly points out Paula Gunn Allen's claim that "the root of oppression is the loss of memory." The Sacred Hoop is about the Americas before Columbus' invasion and the subsequent genocide, and the fact that, as Steinem touchingly puts it, "most of what we want in the future was once here."

5. Trauma and Recovery by Judith Herman

Steinem calls this book "indispensable," so I'm definitely adding this to my desert island list. It's about the importance of honesty in the way we portray terrible events, in order to heal individual trauma as well as to move a society along.

6. At the Dark End of the Street by Danielle McGuire

At the Dark End of the Street repaints the popular image of Rosa Parks as a harmless, elderly, spontaneous protester (more palatable to a society that doesn't look kindly on "angry," powerful women) — and reveals the truth about Parks as a strong and determined activist. It is important to Steinem that the female half of the civil rights movement is made visible in this way.

7. The Color Purple by Alice Walker

Alice Walker has been a lifelong friend of Steinem's, so it's no wonder this book is on her list. The Color Purple has been beloved by many, but Steinem's words are particularly moving: "[Walker] makes the invisible visible, and redeems people who seem irredeemable, [and] she makes every reader feel visible and redeemable, too."

Steinem argues that "violence against females is the normalizer of all other forms of violence," and so this book on that hard-hitting topic is "vital."

The strength of this book lies in the power it gives to imagination. As Steinem explains, "If a Chinese girl living in the back of a laundry in San Francisco can imagine herself as a woman warrior riding down from the hills of China to rescue her people, I can imagine myself off this island."

This title hasn't even been published yet — but Gloria Steinem has managed to have a sneak peek. And she likes it so much that she says it contains her favorite lines:

More like this
50 Books To Read With Your Book Club
By K.W. Colyard
10 Must-Read New Books Out This Week
By K.W. Colyard
The Biggest Differences Between 'Bullet Train' & The Book It’s Based On
By Arya Roshanian
We’ve All Had Bad Sex. Nona Willis Aronowitz Is Talking About It.
By Sophia Benoit
Get Even More From Bustle — Sign Up For The Newsletter