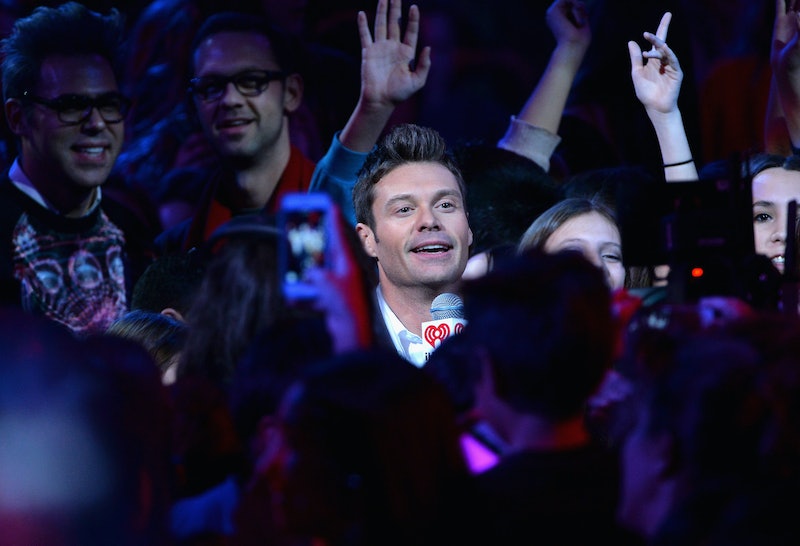 You think your life is busy? Try being Ryan Seacrest. The TV host/producer/personality, who, like usual, is a fixture on red carpets this awards season, is often called the hardest working guy in Hollywood, and that's no exaggeration; Seacrest has literally dozens of jobs, and to most people, nearly all of them would seem like a full-time commitment. Yet Seacrest somehow manages to get it all done, expand his empire, and still have a social life, all while looking awake and excited, no matter how little sleep he's probably gotten the night before. The only explanation? He's not human. Because if that's not true, then our Netflix binges and twice-daily naps suddenly look a whole lot worse.

We may never know exactly why Seacrest does it all (seriously, doesn't the man value sleep?), but we can at least try to imagine how. While Seacrest has done few "a day in the life" things in the past, the most recent one was in 2011, when his workload, while still crazy heavy, wasn't nearly as full as it is today. So we're forced to take it upon ourselves to determine how the man gets it all done, one day at a time:

6 AM - Wakes up. Gets make-up done by stylist to cover the bags under his eyes.

7 AM - Meets with The Today Show people to go over last-minute changes for their coverage of the Winter Olympics. Seacrest is a "special correspondent" for Today, acting as a contributor to primetime news, entertainment, and special events.

9 AM - Hosts On Air With Ryan Seacrest, the daily syndicated radio show for which he's also a producer. On Air reaches 150 stations in North America.

11 AM: Has a secret meeting with CBS executives to plan upcoming news show. Currently, Seacrest has stakes in ABC, NBC, and Fox; a deal with CBS would give him total network dominance.

11:45 AM - Gets nutrients through feeding tube. Actual meals are for lazy people.

12 PM - Fights with Kris Jenner over a scene in Keeping Up With the Kardashians, the E! network's most popular show and one of Seacrest's productions (along with all other Kardashian-related programming). Jenner, also a producer, argues that it's imperative to graphically discuss her digestion issues, while Seacrest politely suggests that maybe, even for the Kardashians, some things are better left unsaid.

1 PM - Tries to convince the former Jonas Brothers to reunite on Married to Jonas, at least for an episode. Joe refuses, saying he's "done with all the drama," but Seacrest promises him a chance to name-drop more celebrities on air, and the middle Jonas reluctantly agrees.

1:30 PM - Meets with the E! News team to go over content for the day's show. Seacrest, who once hosted the news show regularly (to the tune of a $21 million deal that included hosting/producing other E! programs), now acts primarily as its managing editor.

4 PM - Fills in Selena Gomez on upcoming plans for the Ryan Seacrest Foundation, a charity for seriously ill and injured kids that has Gomez as an ambassador. Since its creation in 2010, the Foundation, aimed at "enhancing the quality of life" for young patients, has built broadcast media centers in two children's hospitals.

4:30 PM - Has initial meeting for Dick Clark's New Year's Rockin' Eve With Ryan Seacrest 2015. It may only be January, but it's never too early to start planning next year's show. Seacrest both produces and hosts the show, having taken it over in '05 when Clark suffered a stroke.

5 PM - Films American Idol. Seacrest, who has hosted the show since '02, signed a $30 million deal back in 2012 to stay on for another two years — after his $45 million deal, signed in '09, had expired. He's the highest paid reality show host to date.

6:30 PM - Begs NBC to cancel the The Million Second Quiz, or at least find someone else to host the second season. It's confusing, unlikable, and low-rated, and Seacrest knows it's going nowhere. Besides, he already has The Today Show to keep his role in NBC.

7 PM - Reassures Bain Capital and Thomas H. Lee Partners that everything is under control. The companies have invested nearly $300 million in Ryan Seacrest Productions, and understandably, they don't want to take any chances.

8 PM - Has dinner with his agent, who hands him the script for an upcoming film. Seacrest, like he did in Knocked Up, Get Smart, and New Years' Eve, would parody himself in the movie. He declines, saying that he prefers to stick to real acting, i.e. that time he played the father of Butterpants in Shrek Forever After.

9 PM - Defends Shahs of Sunset to a critic on the phone, saying that no, the Bravo series about rich, arrogant Iranian-Americans living in Beverly Hills doesn't enforce stereotypes. Why would one ever think that?

10 PM - Plans out the weekend schedule for American Top 40, the syndicated weekly countdown show Seacrest has hosted since 2004.

2 AM - Drunk dials ex-girlfriend Julianne Hough and begs for her forgiveness. "You're just too busy for me," Hough says, but Seacrest swears that he'll lighten up his load if she returns. She doesn't believe him.

3 AM - Completes his nightly ritual of calling, individually, all the naysayers who said that a college drop-out from Georgia didn't have a shot in hell at making it in Hollywood. Their apologies sing him to sleep.