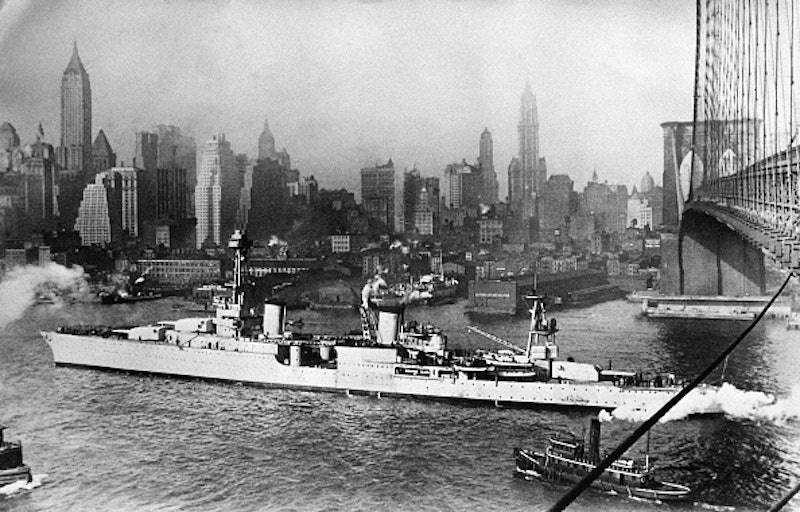 Even if you've flown from coast to coast or been dragged along in the family camper on every interstate highway in the country, you've never seen American cities like this before. Even if your last name was Griswold and you saw monuments fly by in the family station wagon, this is something different. These photos come from the early days of American cities, from the turn of the century to the 1930s (or the 1960s in Las Vegas' case — earlier there was hardly anything there). These are not your cities of today.

Eastern and Midwestern cities like Chicago and New York had mostly horse and buggies — not cars. They also had relatively few people. In 1900, New York was home to just under 3.5 million people. Chicago had 1.7 million and Washington, D.C., had just 279,000. More interesting still would be to look at Southern and Western cities like Los Angeles, Las Vegas, or even Seattle.

Take L.A., for example. In 1920, there were just half a million people living in what would become the country's second-largest city. Despite the huge influence on our country today, 100 years ago there wasn't as much there. Take a look at these cities in their early days — or in some cases, very near birth.

One thing hasn't changed in 100 years, and that's the kind of photos taken of the Flatiron Building. They always turn out beautifully.

Wall Street in 1911. The bankers might be richer now, but they sure dressed sharp in the early 20th century.

In this image, it's March 1919 and the 27th Division is passing through the Victory Arch on Fifth Avenue, the largest military parade the city has ever held.

In this photo, the crowd has gathered for baseball. This is Times Square nearly a century ago in October 1919. The crowd is waiting to hear the results of the World Series being played between the Cincinnati Reds and the Chicago White Sox.

An early view from the Second City's L train, the elevated railway connecting the city, taken in 1908.

Here you can see why an elevated train was necessary. This is the street-level traffic at one of the city's busier intersections, Dearborn and Randloph, taken in 1909.

Outside of the Loop, or central business district, things were a little calmer. Here's the Chicago Water Tower, one of the only buildings to survive the city's great fire in 1871. Shown here in 1909, it still stands today.

One of the earliest views of the city, taken at the intersection of 11th and F streets.

Suffragettes picketed the White House in 1917. Women got the vote in 1920 with the ratification of the 19th Amendment.

If you attended Barack Obama's inauguration, you followed a long American tradition. Here's a shot from President Woodrow Wilson's second inauguration in 1917.

Whoever says D.C. is all politics and no fun has never swum in the reflecting pool in front of the Lincoln Memorial on the National Mall. The boys here were photographed in 1926.

Before South Florida became an endless sea of coastal developments, clearings like this had to be cut to prepare for the growth. This spot, shot in 1915, would later become the shopping district of Lincoln Road, Miami Beach.

This 1920s overview of the Roney Plaza Hotel and Casino in Miami Beach shows that there weren't many skyscrapers yet.

But by the early 1930s, Miami Beach saw plenty of beach-goers.

Like much of the West, Seattle was once native land. The city's name comes from Chief Seattle, the then-leader of the Suquamish Tribe. This is a totem pole that the city's chamber of commerce erected, shown in 1918, that had been stolen from a Tlingit village in Alaska.

The city as viewed from Puget Sound taken in 1929.

Not all angles of the city looked so nice, though. This photo was taken around 1930, and shows the grittier side to the city.

Here, also in 1929, fisherman lower a net with their catch into a solution to keep the fish fresh.

A man in 1913 overlooks a relatively barren Laurel Canyon in Hollywood.

This is an aerial shot of the opening of the Los Angeles Aqueduct, also in 1913, which for a century has provided L.A. with much of its water, brought down from the Sierra Nevada mountains.

L.A. City Hall shown from above (it's the building on the right). The picture was shot in 1935.

This 1935 photograph shows the Angels Flight funicular which operated from 1901 until it was closed in 1969. It brought people to the top of Bunker Hill near downtown. Also shown is the Third Street Tunnel.

The newest of the cities in many ways, Las Vegas' Flaming Casino is shown here under construction in 1947.

Lake Mead also had water back then. Providing the city's drinking water, the reservoir is about 24 miles from the Strip.

The neon lights of the strip in the late 1960s. A far cry from the Bellagio of today, but an important moment in American history.

Whether you can see echoes of today's cities in these photos or not, these early stages in their development shape our world in many ways from commutes to water prices. And stay tuned. Given the number of people moving back to the cities, another important stage may be just around the corner.

More like this
The 3 Best Heated Steering Wheel Covers
By Margeaux Baulch Klein
Marianna Hewitt’s Advice For Building A Personal Brand
By Taylor Jean Stephan
Grenada Is The Ultimate Caribbean Hotspot For Relaxation & Adventure
By Hannah Orenstein
Twitter Has *A Lot* To Say About The "Single Penalty”
By Sam Ramsden
Get Even More From Bustle — Sign Up For The Newsletter
From hair trends to relationship advice, our daily newsletter has everything you need to sound like a person who’s on TikTok, even if you aren’t.