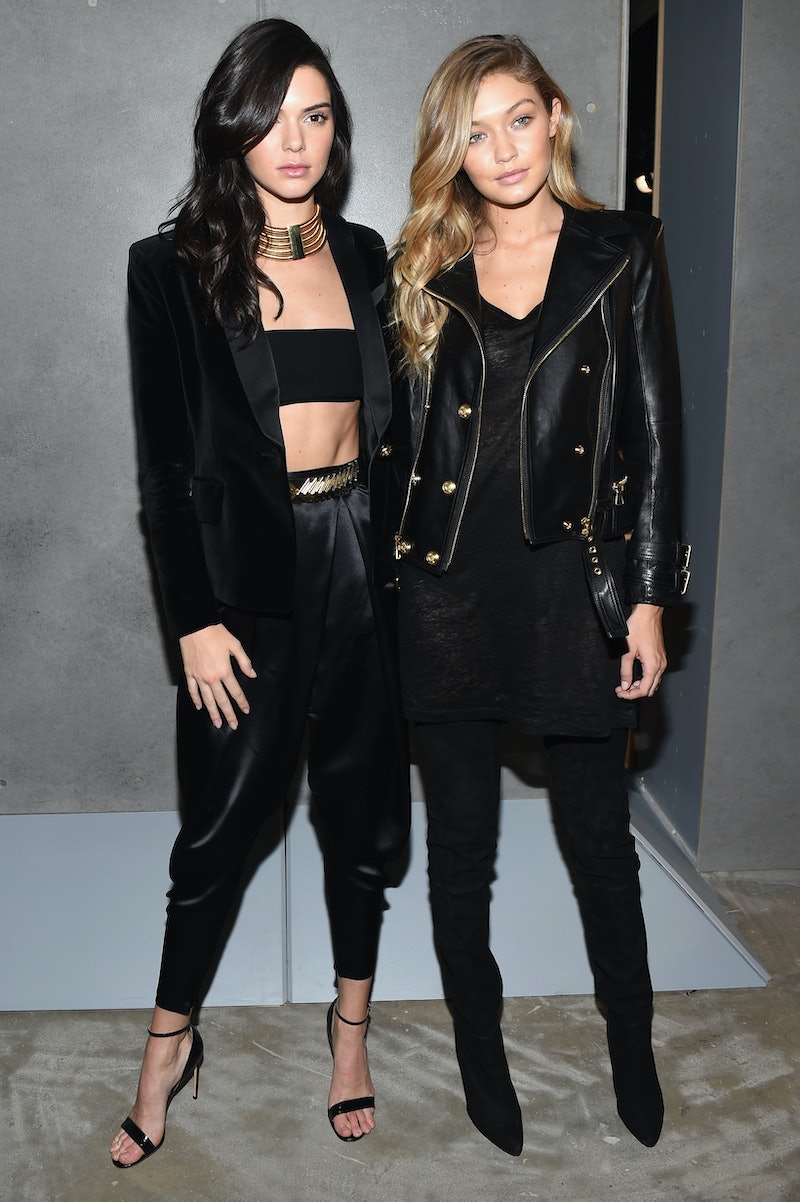 It's haute couture fashion week, and we were inevitably going to see the dynamic duo walking the runway together. So it only makes sense that BFFs and models Kendall Jenner and Gigi Hadid hit the 2016 Chanel Haute Couture runway — easily one of the most anticipated couture shows of the week — and absolutely killed it. Jenner and Hadid looked drop-dead-gorgeous in the luxurious Chanel designs, flawlessly adding another major accomplishment to their resumes while only strengthening their shared It-girl status.

Jenner and Hadid are officially a modeling duo to be reckoned with. They both appeared in the very popular BALMAIN x H&M campaign; they both made the cut for the Victoria's Secret Fashion Show; and they both appeared in plenty of other shows, campaigns, and magazine covers in 2015. Clearly, 2016 is off to a good start. It was a pleasant surprise to see both Jenner and Hadid on the Chanel Haute Couture Runway, which took place on Tuesday in Paris, France. And by the looks of things, they absolutely rocked the runway.

Hadid and Jenner both wore classic Chanel garb, from twinkling tweed dresses to flowing black tulle gowns, for the brand's zen-garden doll house-themed show.The set proved to be a lovely backdrop as the models strutted through garden walkways and ended up standing within an elaborate structure for the final reveal. Both Jenner and Hadid graced the runway with their flawlessness, looking gorgeous in their respective looks.

Prior to the show, Chanel posted a photo of Hadid in hair and makeup on the brand Instagram account. That eyeliner is crazy amazing, and the buns embellished with airy fabric were a perfect juxtaposition to the luxe, detailed clothes.

Jenner has such ease and grace on the runway. Even in this still photo, you can see how well she wears the black tulle gown. Stunning is an understatement, and there's no doubt this gown will be on high-bid for the Oscars.

In this photo you can better see the cut-outs and embellished detailing on the top of this dress. Werk it girl.

Vanessa Friedman, The New York Times Fashion Director, posted a Vine of Hadid's ensemble in action. Her gold sparkling dress along with the shiny cape made for quite a dramatic outfit, no?

While I'm not a huge fan of fanny packs, Hadid makes this Chanel version look pretty cool. How fierce does she look in this snap off the runway?

This close-up of Hadid's makeup makes me think she could rock this look everyday and be fab.

#ProudMama Kris Jenner posted about her daughter with a great view of the show's set.

Walking a couture runway show is a big deal for models, and there's no doubt that Hadid and Jenner have both worked hard to earn their spots on Chanel's roster. I'm sure they were beyond excited to have each other during this major career event! I have no doubt we'll be seeing more of this duo in the future.