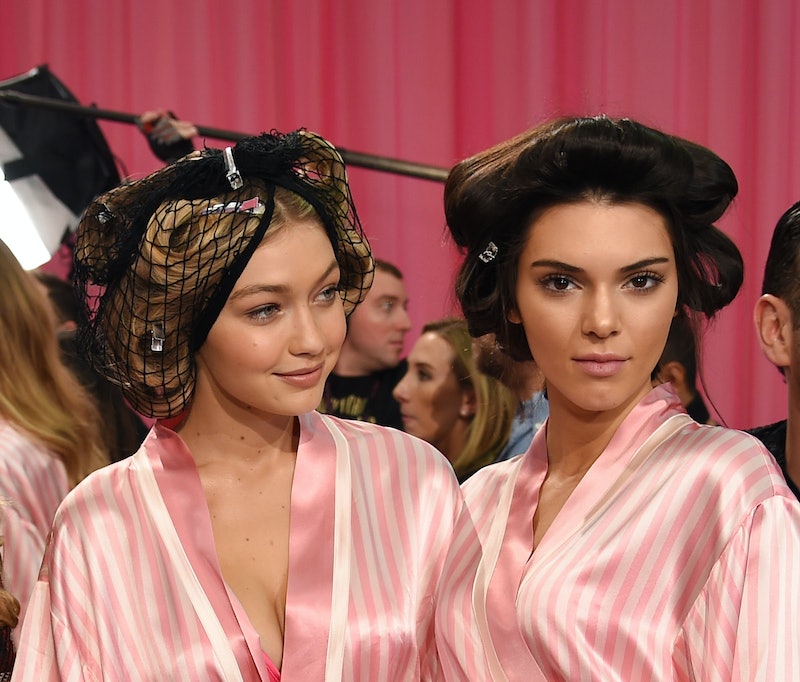 It is almost impossible in this day and age to not hear about the newest celebrity squads and BFFs, and one of the hottest pairs is Gigi Hadid and Kendall Jenner. The two girls are part of another famous #squad (Taylor Swift's), but these two have a strong friendship all their own. So, how did Hadid and Jenner meet and become the BFF darlings of the fashion world?

The friends just made their Victoria's Secret fashion show debuts and are living their dreams together, and who better to share that with than your best friend? Aside from being super supportive of each other's careers, they seem to be inseparable. They were a force to be reckoned at this year's fall Fashion Month, kicking off in NYC before traveling all around Europe. They hang out with the likes of Cara Delevingne and shmooze with Drake and Justin Bieber, so it's safe to say that Jenner and Hadid are so hot right now.

From what I have uncovered, it seems like Hadid and Jenner were acquaintances for a while, which eventually led to a closer friendship.

It is almost as if they were destined to be best friends. Hadid's step-dad, David Foster, was married to Linda Thompson, who was once married to Caitlyn Jenner. Hadid explained to Vanity Fair , "You know when in high school or middle school you want your best friend to marry your sibling so you have the same last name, well that just happened with me and Kendall we just didn't have to ask." That said, Hadid and Jenner never actually met from that past family connection, but now it's something that they have in common.

Although they both got their first taste of celebrity through their families' involvement in reality television, their modeling careers are what shot them into superstar territory. Hadid has been involved in the modeling world longer than Jenner. Her mother, Yolanda Foster, was a model, and Hadid modeled for Guess as a baby.

In September 2014, Hadid spoke of Jenner to the New York Post and said, “We are friendly... There is no competition. Someone who wants a Kendall-looking model isn’t going to want me in the end, but those girls are great.”

It seems as if the women really bonded once they got into the modeling world. I imagine their similar backgrounds and mutual friends (Hailey Baldwin, Justin Bieber, etc.) made that happen even quicker. When Jenner was finishing up her NYFW rounds this past February, Hadid was supportive of her friend and told E! News that Jenner is "sexy" and "beautiful" and definitely should be a Sports Illustrated model, like Hadid is. Jenner responded, in her own interview with E!, "I actually saw that today. She is so sweet, I love her."

A month later, it was clear the superstar friendship was fully formed. Hadid shared with E! News, "Kendall and I have a really good friendship in the sense that we have different career paths but we're both kind of on equal points in our careers where we really understand each other."

Within a year, Jenner and Hadid have become inseparable, and I think it's awesome that they have such a supporting and loyal friendship, even while being part of such a competitive world. It sounds like there is very little that these two BFFs won't be able to accomplish together.