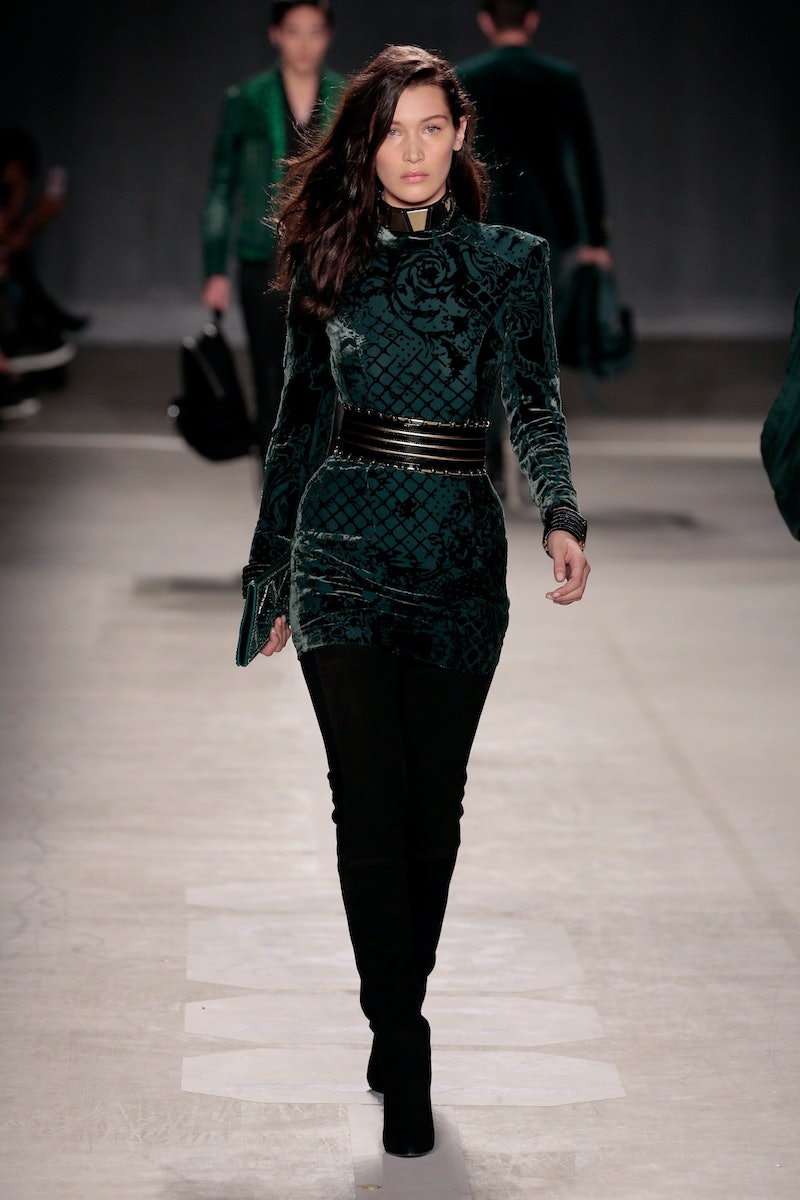 Gigi, who? Haute Couture Fashion Week kicked off in Paris, and this time, all eyes were on the littlest Hadid sister. Bella Hadid made her Chanel couture debut on Tuesday, marking her official ascent to supermodel status, at least IMO. Vogue may have called Kendall and Gigi supermodels, but it seems like Bella is quickly earning that title, too. When Karl Lagerfeld, a.k.a. the biggest living fashion legend, plucks you out of the fashion crowd to walk in his show, the path to superstardom is pretty much paved clear. Mark my words — 2016 will be the year of Bella Hadid.

The 19-year-old strutted her stuff down the catwalk in a stunning skin-tight ivory dress complete with sheer paneling, cutout shoulders, and floral and jewel embroidery. While the designer threads were obviously gorgeous, it was one unique accessory that made this look an absolute must-see. Hadid sported a taupe-colored satin sash around her waist attached to a tiny purse, which looked like the cooler, more modern version of a fanny pack. Leave it to Lagerfeld to turn fanny packs chic. Her runway look was complete with a wide, center-parted bun and an ultra dramatic cat-eye liner that extended along her cheekbones. The head-to-toe, doll-like look was insanely pretty.

The rising supermodel is no longer living in her famous sisters' shadow. Having walked for some of the biggest designers in the game, including Chanel, Balmain, and Marc Jacobs, it is clear that Hadid is earning her fashion stripes quicker than anyone.

Check out her Chanel couture debut.

This is one of my favorite hair & makeup looks ever.

It looks she totally slayed her first Chanel couture show.

More like this
10 Show-Stopping Manicures From The 2022 BET Awards
By Paris Giles
Hailey Bieber's "Glazed Donut" Nails Are So Minimalist Chic
By Danielle Sinay
35 Ideas For 4th Of July Nails That Go Beyond Red, White, & Blue
By Audrey Noble
Rihanna’s Makeup Artist Isamaya Ffrench Is Launching Her Own Makeup Line
By Tomi Otekunrin
Get Even More From Bustle — Sign Up For The Newsletter