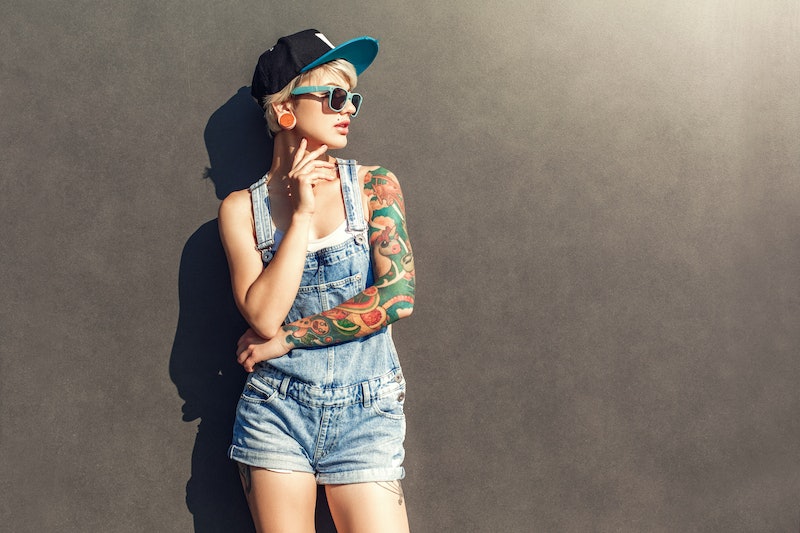 There's basically no such thing as a breast lump that doesn't grab your attention. And that's a good thing: though experts estimate that 60 to 80 percent of breast lumps are benign (especially in folks under 40), it's good to get in the habit of paying attention to your breast health — including being aware of any changes to the shape, look, or texture of your breasts. Dr. Shubhada Dhage, MD, associate director of the NYU Winthrop Hospital Breast Health Program and director, Breast Surgical Services, tells Bustle that you should consult a doctor any time you feel something "new" or "different" in your breasts — a medical professional is the only one who can tell if a breast lump is something to be concerned about.

However, this doesn't mean that every bump that appears in your breast is a sign of a serious health issue. According to Dhage, "Benign causes of lumps can be lymph nodes, fatty nodules, overgrowth of normal breast tissue (fibroadenomas) and cysts."

Only a doctor can really help you figure out whether a lump in your breast is something to be concerned about. But learning how to tell abnormal lumps from normal ones can help you stay calmer and more collected if you do happen to find a lump.

What's Normal: Your breasts are pretty lumpy in and of themselves — the tissues, fat, and milk ducts and lobules inside our breasts often feel bumpy (and some of us naturally have bumpier breasts than others, or lumpier times of month in our cycle). But these naturally bumpy areas should feel fairly flexible.

Similarly, Dhage notes that "a 'lump' that is very round or soft is most likely consistent with something that is normal." Many of us have lumps that are called breast cysts — "a smooth, firm fluid-filled lump most commonly seen in women aged 30 to 60," as described by the NHS. If you've ever had a cyst in another part of your body, breast cysts have a similar consistency. Additionally, Dhage says that a lump that feels tender "is usually associated with cysts."

Fibroadenomas — firm breast lumps that, according to the NHS, "moves around easily in the breast" — are also common. While every lump should be evaluated by a medical professional, these particular lumps are not dangerous or abnormal.

What's Abnormal: Conversely, an abnormal breast lump typically feels more solid, and does not move around as easily under the skin as a cyst. An abnormal, hard-to-move lump might be a tumor. There is such a thing as a benign breast tumor , of course— not all breast tumors are inherently cancerous. However, if you feel a tumor of any sort in your breast, you need to go see a doctor to have it evaluated as soon as possible.

Abnormal Breast Lumps Are Often Accompanied By Other Breast Changes

What's Normal: Though you shouldn't ignore or blow off any changes to how your breasts feel or look, you should pay extra attention if a lump has developed while other changes have occurred in your breasts, as well.

This isn't to say that all breast changes are signs of danger: Pain in your breast the reappears at the same point in your menstrual cycle each month is not typically a sign of breast cancer or any other abnormality; similarly, if you have recently been breastfeeding, redness or inflammation of the breast is most likely an infection called mastitis (which should definitely be treated by a doctor).

What's Abnormal: A dangerous breast lump may be accompanied by other physical changes — including nipples that have suddenly inverted, dimpled skin on the breast, or other changes to the appearance of the breast. Changes to the size or shape of your breast are also a cause for alarm. Nipple discharge that is bloody, or appears suddenly is something to pay special attention to, according to Dhage.

Of course, some lumps appear on their own, with no additional changes to the breast — but they should still be checked out by a doctor.

In fact, in all of these situations, you want to talk to a doctor no matter what — you have nothing to lose and everything to gain by getting a medical professional's opinion as soon as possible. Especially now that you know so many ways that breast lumps can end up not being that scary after all.

This article was originally published on Jan. 26, 2016