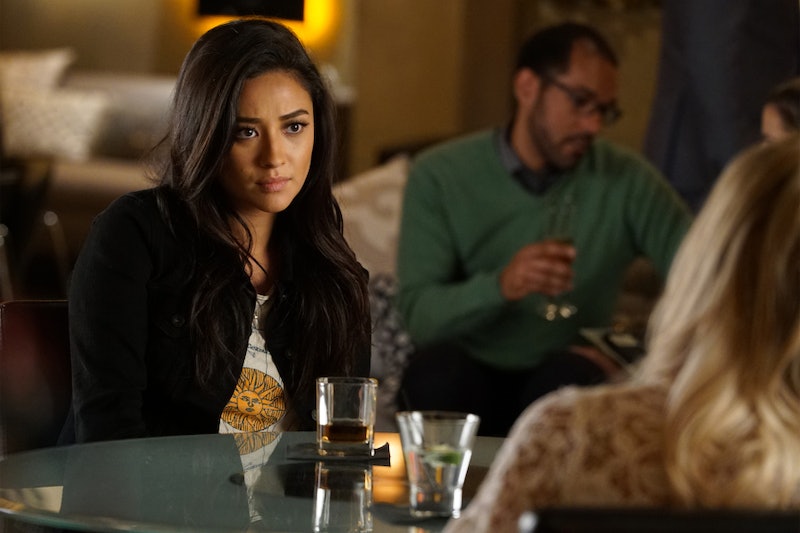 Now that that's out of the way, can we get around to whether or not Ezra is really as creepy as he seems this season? After almost three weeks of Season 6b episodes, Tuesday night's "The Gloves Are On" revealed that Emily's donating her eggs on Pretty Little Liars because she's broke. So all of those needles and "treatments" she's been getting are to prepare her to donate. Sure, this is a relief, but did I really need to wait three weeks to find out or for Hanna to have to drag it out of her like she did?

Don't get me wrong, I'm glad Emily's OK (mostly because I don't think we can handle any more drama in Rosewood), but this took way too long to come out. I had more important things to worry about — like if Ezra is a murderer and whether or not Spaleb could be endgame. The only thing Emily revealed was that she's doing this because she's broke, so we still don't know how Emily spent all of her father's money. But it seems like she may have just burned through it trying to keep her lie afloat until she was ready to talk to her mom. Which, considering how well this secret turned out, is probably exactly what happened.

The worst part about Emily's big secret is that, after all of this time, the Liars still haven't learned that keeping a secret is totally pointless. Emily wanting to protect her mom from disappointment and more grief is one thing, but she's her mom and Mrs. Fields has never been anything but supportive. Learn your damn lesson, Emily. You don't have to do things alone and now that you're back in Rosewood, you shouldn't even try.

For more PLL theories, check out Bustle's podcast Taking This One To The Grave.