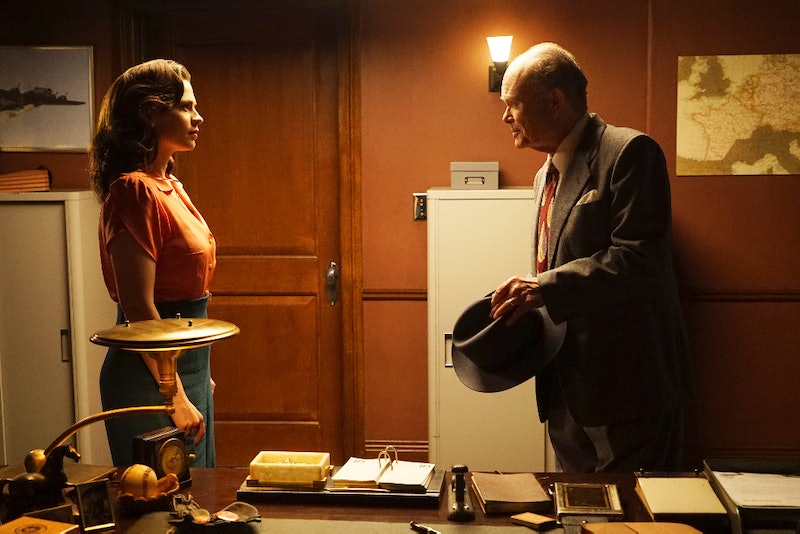 Oh Jack Thompson, what have you gotten yourself into? Something tells me that the Vernon Masters and the FBI on Agent Carter are up to no good, and "no good" in Marvel situations usually means Hydra. This old guy may be a quiet presence for now, but I'd watch out for him.

First, in the Season 2 premiere Masters waltzed in and took over custody of Dottie Underwood — that was the first (Communist) red flag. Was that even FBI? Something tells me Dottie is exactly where she wants to be. Now he's linked with the "pale and male" Arena Club, which is almost certainly connected to Hydra, and interested in Peggy's business? Jack agreed to give Masters certain information about Peggy and Sousa's investigation, and handed over the Dark matter tape. At the end of the episode, he was lead into the Arena Club and right up to Calvin Chadwick.

Thompson at least seems suspicious that Calvin fit Peggy's prediction, so that's good. Perhaps he can become a double agent of sorts. On Agents of S.H.I.E.L.D. and the Captain America movies, we've seen both how S.H.I.E.L.D. works with the federal government and how Hydra has infiltrated it at multiple levels. I like that we're seeing seeds and shades of that on this series as well.

Before we go catch a flight across country, did I additionally detect some loneliness from Chad Michael Murray towards the end of the episode as well? I think he really wanted Sousa to go get a drink with him — though joke's on him, as Peggy knows, it's near impossible to get the timing right for a drink with Sousa. But honestly, I think Thompson wanted a friend. The guy is a Grade A jerkface so I'm not jumping out of my chair to redeem him, but I did catch that moment. Jack Thompson may not be my favorite character on Agent Carter, but this business with the FBI could have major repercussions.