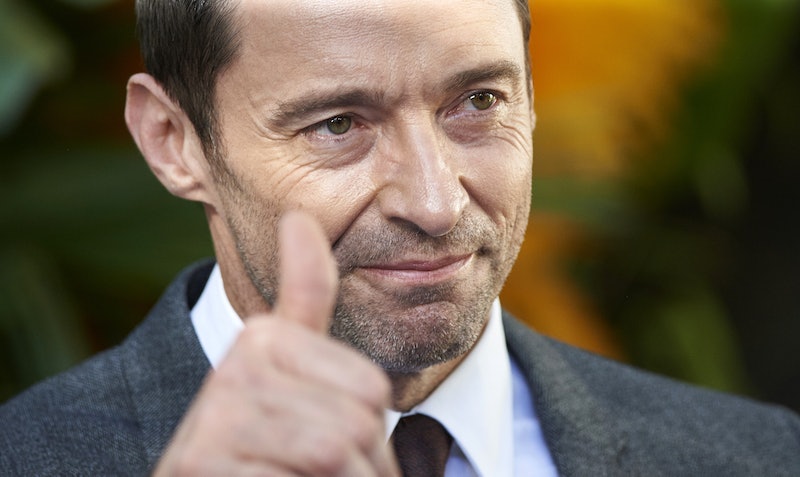 Surely one of the most controversial films to be released in 2016, Deadpool , starring Ryan Reynolds as the bad-mouthed superhero, has garnered a lot of attention for it's risqué advertisements. Similarly, it's trailers — especially those anything goes redband trailers — pack a saucy, and often offensive, punch. The latest Deadpool trailer pokes fun at another superhero, Hugh Jackman's Wolverine. Jackman is an Australian actor, and the film's latest tease begins: "A special Australia Day message from Deadpool." In the spot, Deadpool lists the reasons Australia sucks, saying: "You gave us Wolverine, and for that, I can't forgive you. I've got no problem with Hugh, he's a true legend." He continues, "But the movie, that was a true low for me."

On the red carpet for a special surprise screening of Eddie the Eagle, Hugh Jackman gave his two cents about the trailer. "I loved it," he says, a huge grin on his face. "He's so funny. He's hilarious. I can't wait to see it. I love Ryan, and he can take the shots. Bring it on." Well there you have it.

Deadpool's Australia Day trailer isn't the first time the R-rated flick has used lewd tactics to get eyeballs. Billboards across the United States show Reynolds' Deadpool lounging in a seductive pose, a gun held below his abdomen, with the words: "Wait 'til you get a load of me" above his head. Another advertisement shows Deadpool sitting in an empty theater. The seat on one side of him says, "Reserved for you." The seat on the other side of him says, "Reserved for your mom."

Take a look at the Australia Day trailer below. Jackman sure is a good sport.