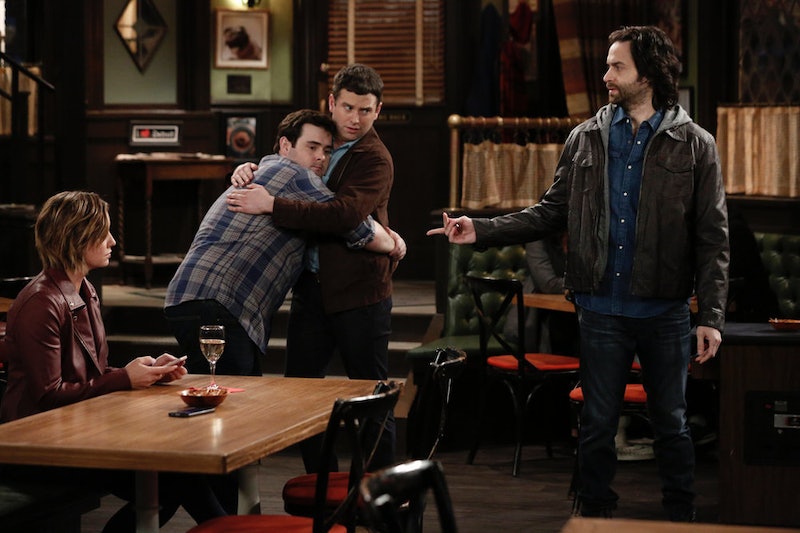 I'm at the point where I'm too tired to go out and rage when the week is over and done with. Instead, I like to stay in on my Friday nights and watch NBC's Undateable. Yep, that zany live sitcom banished to TV's most undesirable timeslot is actually worth watching and I really mean that. But after its season finale on Friday night, will Undateable return for Season 4? There's no definitive word yet from NBC on whether or not the series will be renewed, but I really hope it does come back. I think the comedy has really come into its own with its live incarnation this season and it's so good that you might actually want to consider staying in on a Friday night to check it out.

Unfortunately, I may be one of few people who feel that way, as according to TVSeriesFinale, Undateable 's ratings have been siginificantly lower in Season 3 than Season 2, averaging about 2.7 million viewers each week, compared to last season's 4.7 million. That doesn't mean the series is doomed, just that we fans shouldn't get our hopes up too much while waiting for NBC's official announcment.

To refresh your memory, Undateable follows a group of friends who hang out at the Black Eyes Bar and who seem to be, well, undateable. But they have found some luck during the completely live third season, along with cool guest bands, celeb cameos, ad-libs, and really funny topical jokes. Originally, I thought the all-live season gimmick sounded pretty lame, but it's actually turned out to be like one big party inside the TV — and I'm all for that.

Here are all the reasons why Undateable makes it so much fun to stay in on a Friday night and should be renewed to do that for a fourth season.

Usually, sitcoms and their jokes are produced so far in advance that anything happening now might be outdated by the time the episode airs. But since Undateable is live, it can make timely jokes about Empire spoilers, ISIS, and the State of the Union. It even aired a sweet, but funny tribute about the Paris Attacks back in November.

This live element has also given the series an opportunity to use fun, interactive elements. Earlier in the season, Danny's (Chris D’Elia) phone number was given out on air. Fans were encouraged to call it — and D’Elia actually answered.

There's A Main Couple To Root For

The romance between bar owner Justin and waitress Candace cut the will-they-or-won't-they out of the equation by getting together in the Season 3 premiere — which the gang also totally called out in hilarious fashion. Now, they have a cute ongoing relationship. It's just so great when two "undateable" people find love.

The Cast & Crew Are All About Social Media

The writers, actors, and producers are all active on social media, giving fans sneak peeks at the show — even during the live episode (above).

The Guest Musicians Are So Cool

The Guest Stars Are Rad, Too

These aren't your usual pre-recorded opening credits. Often on Undateable, the guest band plays a song as the cast sneaks into the studio audience and the respective actors' Twitter handles appear on-screen instead of their names. It's hilarious, fun, and gives a very personal touch to the show.

Hopefully, all of these strengths will convince NBC to bring Undateable back for another season and keep giving me an excuse to stay in on Friday nights.

More like this
'Ghost In The Shell: SAC_2045' Was Only Supposed To Last Two Seasons
By Kadin Burnett
'Who Killed Sara?' Won’t Return For Season 4
By Brad Witter
What’s New On Netflix: 'Stranger Things' & 'Somebody Feed Phil' Return
By Arya Roshanian
What’s New On Netflix: A Victoria Justice Rom-Com & The Return Of David Letterman
By Arya Roshanian
Get Even More From Bustle — Sign Up For The Newsletter