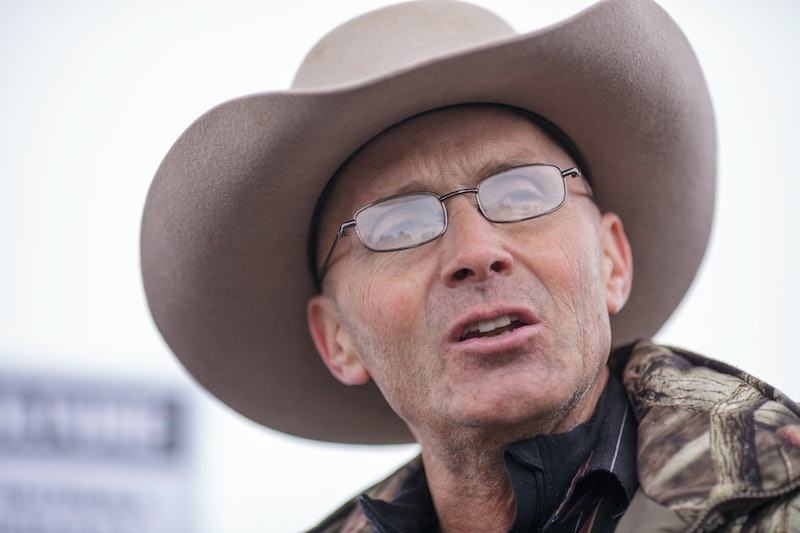 The day before being shot and killed in a standoff with police, the spokesman for the armed group that occupied an Oregon wildlife refuge earlier this month, Robert "LaVoy" Finicum, gave the Oregonian an intense interview about increased tension the group had with federal agents. In the Monday sit-down, he discussed the meeting that the right-wing, anti-government group, labeled by some as "domestic terrorists," was reportedly heading to when they were stopped. He spoke about how "the tenor has changed" with the feds, an eerie prediction of the kind of violent confrontation that resulted in his death on Tuesday.

Finicum, along with the other leaders of the Oregon standoff group were traveling to a meeting in a neighboring community about 40 miles away when they were stopped by the FBI and state police approximately halfway there at about 4:30 p.m. local time. The head of the group, Ammon Bundy, was arrested along with seven others, one of whom was his brother, Ryan Bundy. Ryan suffered a minor gunshot wound in the confrontation but was released into FBI custody.

In the interview, Finicum explained the harder stance he saw the FBI taking:

Have you felt the change in the tone and tenor of the feds out there? We certainly have. We used to could [sic] walk up to them and talk with the FBI agents in a friendly manner, unarmed and stuff, but the tenor has changed. They have become more hardened, and when they step out of their vehicles now they are stepping out with their rifles. They're not willing to just engage in friendly dialogue.

He also claimed the FBI was bringing in more vehicles and manpower. He said flyovers by both manned aircraft and drones had increased. He said he wondered about the why the federal authorities were ramping things up when they're in "the middle of nowhere." He said, "They're doing all the things that shows that they want to take some kinetic action against us."

Why be so unfriendly? Why be so threatening? Why are you threatening such lethal force when we are so far away? ... All the behavior is in preparation of a campaign of some sort, and whether it's just a saber-rattling to try and intimidate or whether they actually mean it, we don't know. All we know is what we see ... They do not want to let go of this. They do not intend on losing here, and we do not intend on giving it back to them.

Though Finicum's death was not confirmed by authorities, his daughter — one of 11 children — told the Oregonian that her 55-year-old father had been killed. "My dad was such a good good man, through and through," Arianna Finicum Brown, 26, told the paper. "He would never ever want to hurt somebody, but he does believe in defending freedom and he knew the risks involved."

Finicum, Bundy, and the other occupiers involved in the armed standoff with federal authorities — they called themselves the Citizens for Constitutional Freedom — have been widely criticized. They have forcibly occupied the Malheur National Wildlife Refuge offices outside of Burns, Oregon, for more than three weeks in protest of the imprisonment of two fellow ranchers who reportedly set fires on federal lands and government ownership and control of land in the area.

The New York Times reported that several members of the group continued to occupy the refuge as of Tuesday night. A spokesperson said they would wait out the night. Jason Patrick, one of the occupiers, said the group was prepared but calm while claiming the FBI was "hellbent on war." He told the Times, “They said ‘peaceful resolution,’ but now there is a dead cowboy."