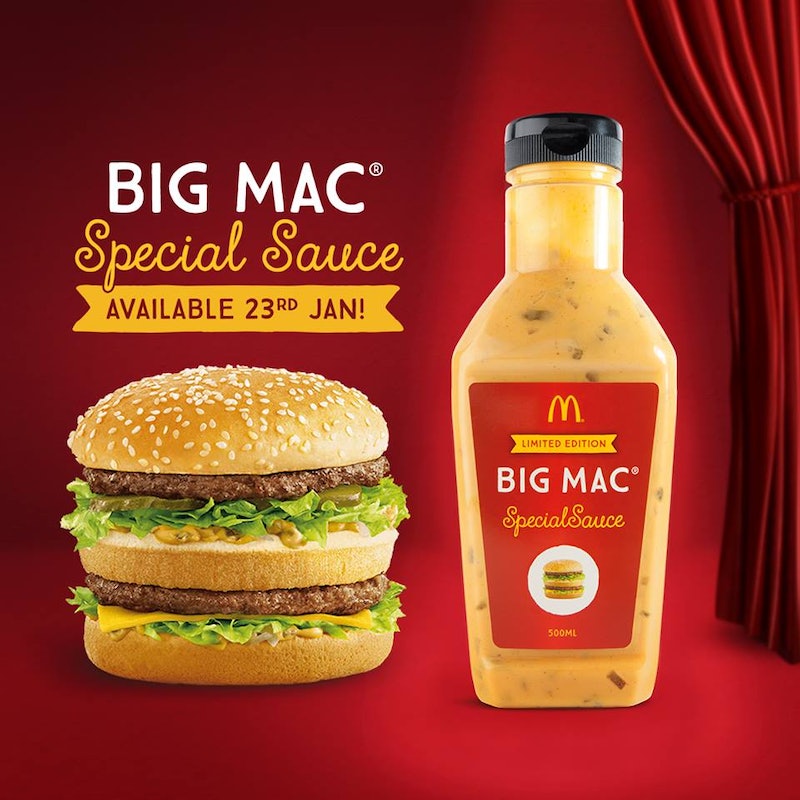 Ever had a craving for the "special sauce" from McDonald's, but been perilously far from the drive-thru? Well, luckily for you, you can now buy McDonald's Big Mac sauce by the bottle. McDonald's is selling 4,000 of the 500 ml bottles for $4.95 a piece. The catch? They're only available in Australia, and even there, the sale is for a limited time only. If you really want to get a hold of it, apparently some customers are buying the Big Mac sauce and reselling it on sites like eBay for up to $100 a bottle. (Yes, you read that correctly: people are selling Big Mac sauce for 100 dollars a bottle.) Excessive? Maybe. Worth it? That's entirely in the eyes of the beholder.

What, exactly, goes into the Big Mac sauce? Unfortunately McDonald's hasn't released their recipe. (It wouldn't be much of a secret ingredient if they did, would it?) If you do a little digging, though, the official ingredients list for what goes into Big Mac sauce is available online, even if the exact measurements remain a mystery.

What isn't a mystery? The fact that people love this stuff. There are numerous hacks online for ordering Big Mac sauce on the side of your order, for example, to dip your French fries in, as well as tips on how to turn your double cheeseburger into a Big Mac while still only paying the Dollar Menu price. That said, some McDonald's locations only allow the sauce to be sold on the Big Mac burger, so people have gotten pretty creative with making copycat recipes at home.

While I've never actually eaten a Big Mac myself, I was able to find some copycat recipes for the sauce that have rave reviews from people who have actually eaten them. Trial and error with these options is probably cheaper than flying to Australia to actually buy the sauce, as well:

These YouTubers estimate that their "special sauce" recipe comes in at about 32 calories per serving, compared to the official Big Mac sauce which totals about 90 calories per serving. Their overall Big Mac copycat totals just under 300 calories, compared to the 500-plus calories in a Big Mac from McDonald's. Not that you need to count your calories or anything, but this version of the famous sandwich is an option if that's your thing.

3. Vegan Big Macs Are a Thing (Including the Sauce)

Yes, vegan Big Macs are a huge hit in the world of vegan junk food. Some restaurants actually sell vegan copycats of the Big Mac, but there are also recipes you can make at home. As a vegan myself, I'm pretty intrigued by this recipe and how this YouTuber pulls it off. You can watch how it goes down at the video above.

Dan Coudreaut, Executive Chef at McDonald's, answers a customer question about what all goes into the special sauce in this video. Coudreaut explains that for the purposes of this video, he's going to make a version of the sauce using ingredients one can typically find at home or in their local grocery store. Comments are disabled for the video, so I can't attest to whether or not people who've tried this version enjoy it, but considering he's the head person in charge and this video was posted to the official McDonald's Canada YouTube account, I'm willing to bet it's a pretty solid remake recipe.

So, there you have it! As of right now, there's no news that McDonald's will release the bottled Big Mac sauce outside of Australia, so if you have a craving for it and don't want to get it at your local McDonald's, give one of the above recipes a shot. You can even dip your fries in it!