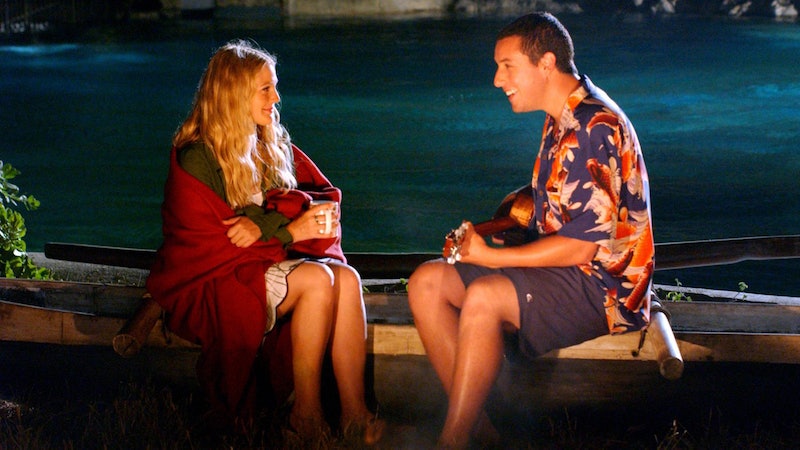 Appearing together first in 1998 in The Wedding Singer, Adam Sandler and Drew Barrymore won audiences over with their playful, innocent chemistry. Hoping lightning would strike twice, the two play another destined-to-be couple in the 2004 romantic comedy 50 First Dates . This movie has the kind of plot that makes you wonder how it made it through studio vetting all the way to a greenlight. Sandler and Barrymore’s involvement had to have had a lot to do with it, because the set-up is beyond absurd: Barrymore plays Lucy Whitmore, a woman who wakes up with amnesia every single morning. Her short-term memory was damaged irreparably in a car accident, and she can’t hold onto any memories that occur after that date. (Fortunately, she suffers from an illness that was just made up for the film, so don't worry about this happening to you.) She lives a blissfully ignorant existence until she meets Dr. Henry Roth (Sandler), a womanizing veterinarian intent on getting her to remember him.

I admit that I saw 50 First Dates in theaters and enjoyed it. Drew Barrymore does a terrific impression of actual sunshine; Adam Sandler is at his most charming; and the theme beyond the conceit — that loving someone means making sure that they know that, every single day — is actually pretty sweet. But time and distance have shown me that 50 First Dates is loaded down with problems that are too big to ignore. Read on for the nine major reasons that I won’t watch 50 First Dates ever again.

1. Henry Has A Long History Of Seducing & Lying To Women

Henry is a "nice" guy, who loves animals and is kind to his friends. He's also a serial womanizer who targets tourists and gets them into bed with made-up stories about himself and his job. His interest in one-night-stands ends when he meets Lucy, which suggests that the problem was the women he was choosing and not his own cruel indifference. Worse still is that he takes Lucy up as a project; her vulnerability is what reels him in. The love of a good and relatively weak woman turns around a philandering man? When will this trope finally be played out?

It's a sign of the times that Schneider's portrayal of Ula, Henry's heavily accented and clownish "Hawaiian" friend wasn't met with the same outrage as Emma Stone's starring turn in Aloha. But it should have been.

3. Lucy's Dad & Brother Lie To Her About Her Illness Every Day

Lucy's family (Blake Clark and Sean Astin) make decisions for Lucy, who is an adult. They decide not to tell her about her memory loss and instead let her relive the day of the accident over and over and over again. The bright side is that they're eventually convinced that they're stripping Lucy of her agency, but the deception still difficult to watch.

Not every meeting is as magical as Henry and Lucy's first, so Henry concocts a series of scenarios to get her attention. (Including putting a wee penguin in danger! Come on, Henry.) Romantic or creepy? More of the latter, sadly.

Every joke directed at this character is hateful and immature.

6. Have You Seen Blackfish?

Sea World and parks like it have come under heavy scrutiny by animal rights activists over the past few years. If Henry's such a great vet, why does he work at one of them?

"Wouldn't It Be Nice?" deserves so much better than this.

8. The Ending Is Absolutely Horrific

The "happy" conclusion of the movie isn't a cure for Lucy. Instead, she wakes up out at sea with Henry. She pops in a videotape that orients her in time. She's married and also pregnant, not remembering either of those life events happening. Is it even ethical to let that happen? Honestly, I'm hyperventilating just imagining it.

I'm sorry, 50 First Dates. You served your purpose as a reunion for two sweethearts of late '90s romantic comedy, but those days are now over.