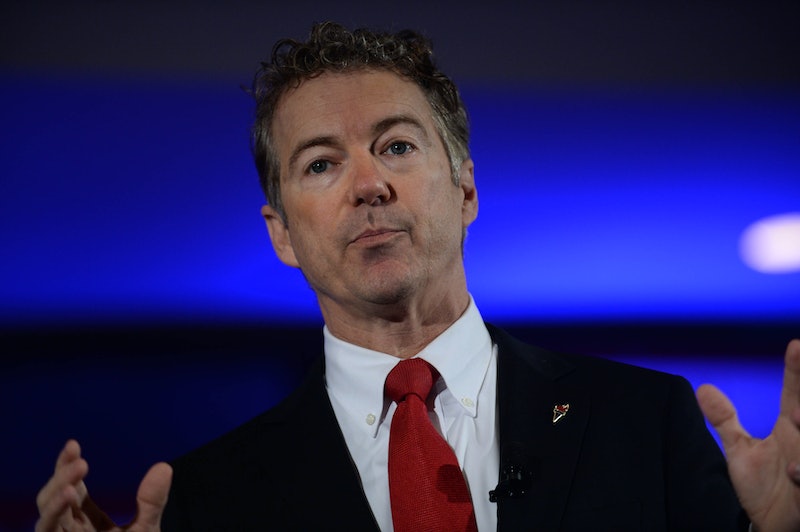 Don't look now, but Rand is back. That's right! Everyone's favorite scruffy-haired Kentucky senator ― well, maybe not everyone (looking at you, Chris Christie) is going to be returning to the limelight on Thursday night, for his last big chance before the Iowa caucuses. In other words, Rand Paul's debate boycott earned a main stage return, and it seems like he's something of a trendsetter ― GOP front-runner Donald Trump, by all accounts, will not participate in Thursday's debate.

Sure, the circumstances are pretty starkly different. During the last Republican debate, Paul boycotted the much-derided undercard debate, and he made it sound like his dignity and ego were bruised by the very thought of it ― despite finishing too low in the polls to make the cut, Paul insisted that he wouldn't let anyone tell him "that we're not a first-tier campaign." For the record, Paul is currently polling in tenth place nationally, at just 2 percent, and in fifth place in Iowa with just 3.8 percent. Unless the polls are wrong ― and not just a little, but wildly wrong ― his campaign and candidacy is anything but "first-tier."

On the other hand, Trump isn't making a desperation heave with his boycott. To the contrary, he's making a naked power play, trying to leverage his top-of-the-field polls to harangue Fox News into removing moderator Megyn Kelly. He's seemingly loathed Kelly ever since she asked him about his history of misogynistic and crude remarks, which he seemingly couldn't handle.

But regardless, with the umbrage act seemingly getting Paul back onto the main stage unscathed, perhaps Trump thinks that being entirely absent from a debate evening won't hurt him that badly. Although it's hard to see where the presidential composure and his much-vaunted confidence enter into this ― to borrow a hackneyed line that's been used a lot this campaign season, how can Trump stand up to Putin if he can't handle a few direct, incisive questions from Kelly? (Trick question ― he actually seems to admire Putin.)

But for Paul, things were more academic all along. Whatever you think of the undercard debate system, his dismal polling more or less made the question a moot point ― to date, only Carly Fiorina has managed to burst onto the main stage thanks to a widely acknowledged win in the undercard, and with Iowa looming, Paul may have made the strategic choice that it'd be worse to be seen trolling in the depths than to not be seen at all.

And for the time being, this is looking like a sound strategy. After all, what would his best case scenario have been? Squeaking back onto the main stage with just a couple percentage points in the polls, just like he managed to do without having to debate. Whether he's got any other canny strategies up his sleeve remains to be seen, although he may have at least one big advantage compared to last time ― it'd do him (and the rest of the field, frankly) a lot of good to actually get a whole debate without Trump's taunting and baiting.

Of course, unless Ted Cruz wins Iowa, or Marco Rubio somehow gets it done, or Paul were to make one of the greatest comebacks in modern American political history, the taunts from Trump aren't going to stop ― can you imagine what that guy will be like if he actually wins something? Here's hoping that the boycott strategy doesn't work out quite so nicely for him.