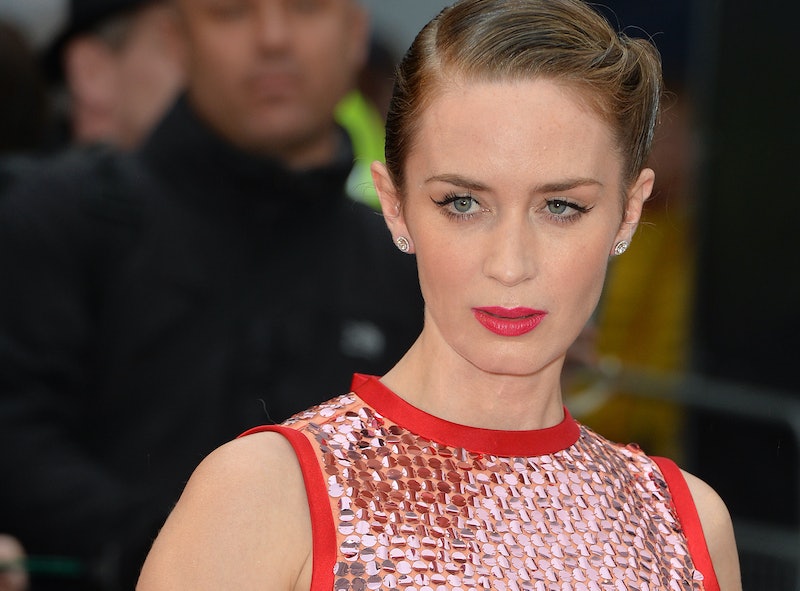 The few weeks before Valentine's Day can be a bit tough to handle when you're a very single lady dodging daily photos of your high school classmates' babies' first teeth. But it is hard to feel bad when one of your favorite celebrity couples have such sweet and amazing news to start their year off with. On Tuesday, Emily Blunt and John Krasinski announced that they are expecting their second child together this year, and their daughter Hazel is about to step into big sister duty! They didn't share any other information, but it's natural to be overly curious and in this case ask when Blunt is due.

Isn't only fair that we know when one of the sweetest celebrity couples is expecting their bundle of joy? This news comes a just few weeks before their daughter's second birthday on Feb. 16, so there is a ton to celebrate in the Blunt/Krasinski household right now. When a celebrity pregnancy is announced, they rarely provide a concrete due date, which leads me to turn to my sleuthing skills and figure this out. In this case, Blunt's reps confirmed her pregnancy at the end of January, so I went back to the actors' history with Hazel to come to a conclusion.

Back in September 2013, Blunt's reps confirmed to Us Weekly that she was pregnant with her first child. We know that Hazel Krasinski was born on Feb. 16, 2014, so, if I calculate correctly, this means that Blunt was around four months pregnant in September 2013. And it's not surprise they waited until around that amount of time considering that three months is the traditional amount of time to wait before announcing a pregnancy.

In that case, if Blunt followed the same protocol as before — and her rep did, once again, confirm her pregnant to Us Weekly — it's safe to say that if Blunt is currently around three and a half to four months along. This means, the second baby can be expected around July or early August. Eee!

Blunt and Krasinski have seemed keen on having more kids. Blunt told Entertainment Tonight last August about a sibling for Hazel: "One day. I don't know when... We’ve got to give her some competition at some point." One thing is for sure, this baby is going to come into a family of a lot of love, and with this much cute, they're all going to be giving everyone a lot of competition.