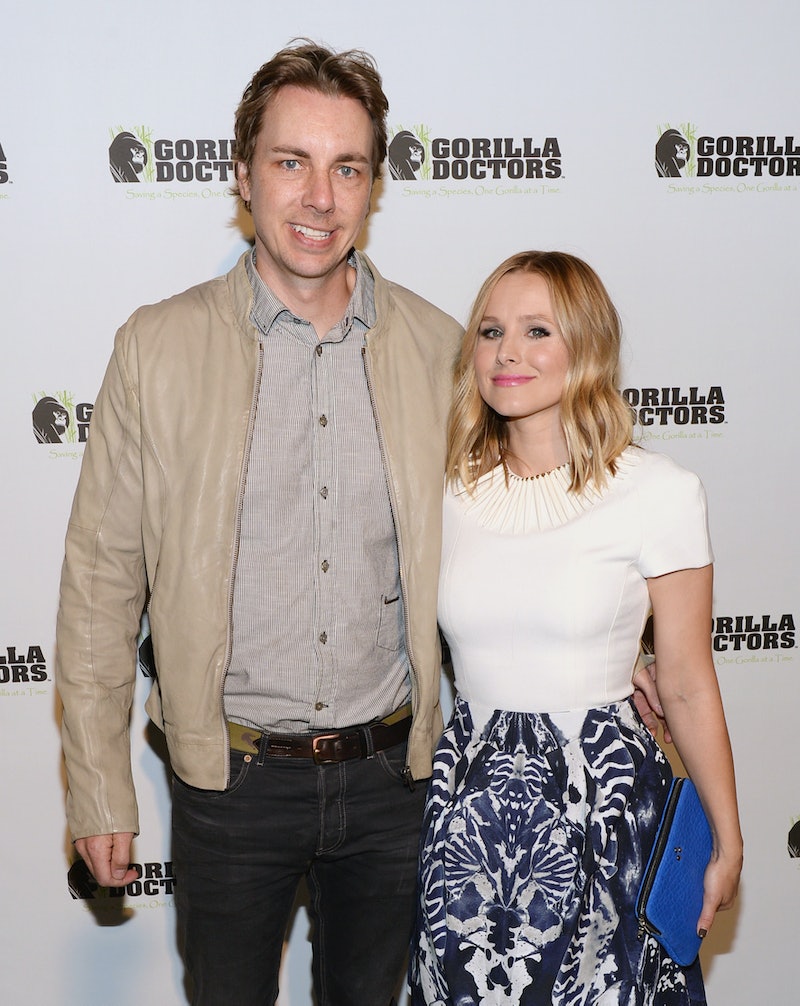 Many celebrity kids, ranging from infants to 18-year-olds, are a frequent presence on sites like People, Us Weekly, and dozens of others, even though neither they nor their parents have given their consent. Many celebrity parents have complained about their kids' photos, and even, in some cases, have taken legal action against paparazzi, but one famous mom has decided to go a step further. On Monday afternoon, Veronica Mars star Kristen Bell declared that she will no longer do interviews with publications that pay photographers for pictures of celebrity children. Bell and husband, Parenthood actor Dax Shepard, welcomed their daughter Lincoln 10 months ago.

It's long been known that Hollywood is far from the safest place for the child of a celebrity. If your parents are famous, then you, automatically, are too — despite the fact that you likely have not done anything yourself to garner the media's attention. Unfortunately, the fact that the magazine-buying public loves seeing photos of Suri Cruise, Violet Affleck, and the Jolie-Pitt kids has a major influence on what photographers' assignments are.

In a series of tweets, Bell announced the drastic measure she planned to take, then explaining her reasoning to curious followers. First, the declaration:

She then followed up with:

The couple's decision is surprising, considering that nearly every major entertainment magazine has featured photos of celebrity children at some point or another. Refusing to provide interviews for them could have a substantial effect on Bell and Shepard's careers, limiting their visibility and lessening their audiences. Still, it seems that the couple has taken this into consideration and has chosen to proceed anyway, because, as they stated, they feel that the safety of their child is more important than any effect the boycott might have on their careers.

It's a bold move, and a seemingly unprecedented one. While celebrities like Jennifer Garner and Halle Berry have previously taken action against paparazzi, their method was a lawsuit, not a boycott. In August, the two actresses testified against photographers' rights to take photos of celebrity children, saying that many paparazzi's methods of getting shots are dangerous and forms of harassment. Berry and Garner won their case, and the Paparazzi Harassment Deterrent Bill, which makes it a misdemeanor to try to photograph or video a celebrity child in a harassing way, was born.

Still, as commendable as the actresses' efforts were, it didn't come close to solving the problem. Celebrity kids are still being photographed constantly, and parents have little power, other than shielding their children with a blankets or staying indoors, to stop it from happening. That's why Bell and Shepard's decision to boycott kid-photographing magazines is a major step, and one that will undoubtedly have serious impact on the methods and morals of the entertainment industry — as long as we change our actions, too.

It's imperative for us, the readers, to change the way we think about photos of celebrity children. Yes, they're young, they're famous, and they're often beautiful, but they're also just kids. They didn't ask for this, and they certainly don't want it. Having a dozen strange men waving cameras in your face and screaming your name several times a day, every day? It sounds like a nightmare — but it's the reality for hundreds of celebrity kids.

We have to consider what Bell said, that stalked children — because yes, they're being stalked — can suffer serious emotional trauma due to photographers' demands. What kid wouldn't grow up terrified if their childhood consisted of flashbulbs and bodyguards? As much as we, the consumers, love seeing Suri Cruise playing in the snow or Louis Bullock rocking a new haircut, our enjoyment is not worth the physical and mental dangers paparazzi pose on celebrity kids. Even if it means just skipping over a page of "5 new Shiloh Jolie-Pitt photos!" when it pops up on your screen, do something; celebrity kids, and their desperate, terrified parents, deserve our support.