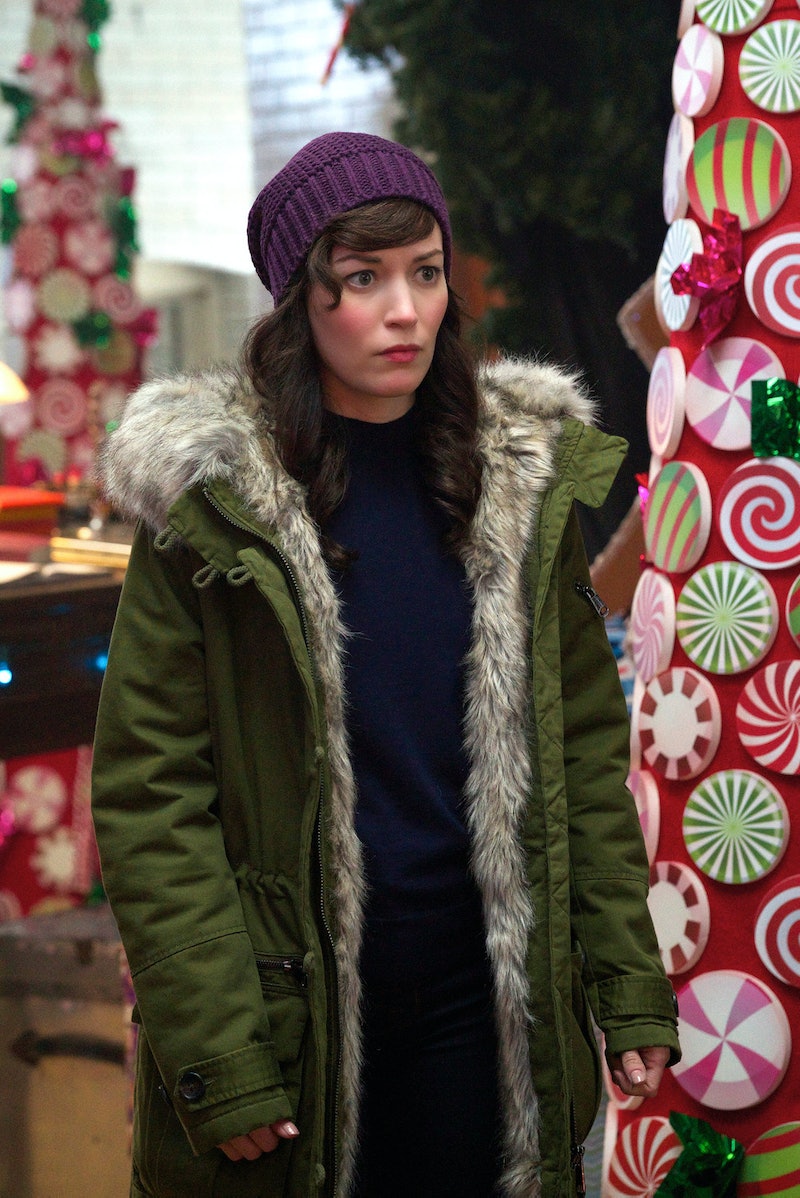 When the second season of Man Seeking Woman premiered on Jan. 6, it was immediately clear that television's most unique show was as confident, fun, insightful, and weird as ever. "What I love about this show is that it is like a romantic comedy but on acid," Man Seeking Woman star Britt Lower tells Bustle, "It takes those classic tropes of meeting and falling in love so that it can look at it more clearly or a bit more skewed." Since the sketch-sitcom hybrid returned to FXX, it has found even more opportunities to stretch beyond its own comedic scope, and Lower's Liz is definitely one of the most flexible characters in that regard. Josh's successful older sister began the series in a committed relationship, but ended up having to re-enter the dating scene in a Season 1 episode that briefly turned the show into Woman Seeking Man.

Now, the writers are visiting the world of Woman Seeking Man again, this time with a festive twist and a side of Liz that audiences haven't seen before. Wednesday night's episode "Tinsel," airing on FXX at 10:30 p.m. is an exploration of desire, fantasy, and the thrill of breaking limitations explored by the usually well-composed Liz. Of course, because this is Man Seeking Woman, all of those themes will be explored through Liz having an affair with a married man — Santa Claus.

"I mean I thought it was hysterical," Lower says of finding out that her character would be having an affair with Kris Kringle. "Just so bizarre in all of the right ways. It’s totally wild and irreverent." Man Seeking Woman has often used absurd concepts to explore harsh truths about love and dating, and "Tinsel" is no different. Lower found it easy to relate the themes of the episode, despite the fact that she "can’t say that [she's] ever fallen in love with Santa Claus," as she explains, "[I] think that there’s that feeling of being compelled to do something because it’s off-limits. I feel that it’s a pretty common feeling for people to have, not even to do with relationships or love."

Lower hints that "Tinsel" will mark brand new territory for the by-the-books Liz. "It’s about stepping outside of her comfort zone ... The pursuit of a fantasy," she says. "Prior to this experience, she’s never had an affair at this level, certainly not with a married man ... She goes against her better instincts and the advice of her mother and against all of the things that make Liz so calculated and she’s got it all figured out and this time, she does not have it figured out."

The actor takes joy in getting to explore this other side of Liz. "It feels liberating to let her hair down and become wrapped up in this adventure. You kind of get to see this more vulnerable side of her where she’s not so ready to clean up the edges. She’s coloring outside the lines in so many ways."

While Lower appreciates getting to explore Liz further as a character in Woman Seeking Man episodes instead of just witnessing Josh's dating mishaps, she believes that viewers can connect with both versions. "I think the show is extremely relatable regardless of the point of view of the gender of the protagonist," she says. "I think at the end of the day, things are the same across the board. It reminds us that we’re all going through it ... I hope that what viewers experience from the Woman Seeking Man episodes is a kind of 'aha' moment – it’s hard for everybody."

As Man Seeking Woman continues to tackle the absurdity of the situations people find themselves in during the quest for love, Lower will keep representing Liz's viewpoint into the weird world of dating. "I like to think of [the show] as — it’s like waking up in a dream. You’re not certain if you’re about to experience a beautiful fantasy or a horrible nightmare. And often times it’s both."