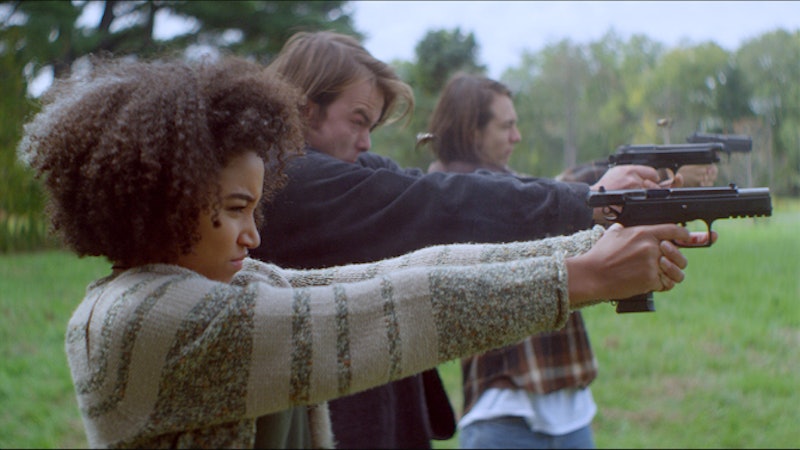 A teen-led drama that deals with gun violence, complicated friendships, LGBT romance, and the complexity of gender might sound like a movie that takes place right in 2016, but As You Are, a new film starring current It Girl Amandla Stenberg, Owen Campbell, and Charlie Heaton, sets itself back in the Nirvana-laced era of the early 1990s. That might seem like an odd choice to some, considering the modern relevance of the film's subjects and themes, but as its stars insist, the movie couldn't be more timely.

"It is technically a period piece, but it’s not about a dated feeling," Campbell tells Bustle while at the Sundance Film Festival to promote the film. "Loneliness and attraction and passion and friendship and violence are eternal."

That's for sure. As the moving As You Are makes clear, many of the issues that plagued teens back in the early '90s — parents' frustrations, explorations of one's sexuality, the ever-changing dynamics of friendship — are still alive and well today. And the film, the directorial debut of Miles Joris-Peyrafitte, captures these subjects interestingly and compellingly, letting its three young leads figure out their world in a way that'll resonate with both current teens and those awash in nostalgia.

"Adolescence is alienating in itself," says the 17-year-old Stenberg. "And so the fact that he [Joris-Peyrafitte] wanted very much to portray teenagers in a way that was truthful to them, and was very honest, was really refreshing."

In the film, Stenberg plays Sarah, a smart, big-hearted girl who befriends the boys at the center of the story: Campbell's Jack, a sweet if spacey kid living with a single mom, and Heaton's Mark, the loud, fun-loving son of the man dating Jack's mother. The trio quickly fall into a deep friendship, with Jack and Mark becoming especially close; just how close, and what that intimacy could mean, is the main question As You Are explores. The two boys' complicated relationship, while not quite defined, is a rarity for film, as most movies don't even attempt to show LGBT relationships between adults, let alone teens just beginning to figure out their sexualities and desires. For Campbell, his character's complex feelings towards Mark was one of the most intriguing things about As You Are.

"There was never a moment where I was intimidated by the sexuality of the character," he says, adding that the fact that Jack and Mark's relationship isn't labeled makes the movie even more intriguing. "It’s not like he [Jack] was fantasizing about men or women before — there was just no one in his life. He’d taken sexuality and pushed it far away from himself, maybe because he was scared of what he felt, but also because he was not in an environment where he felt that there was anyone he wanted to be sexual with."

Adds Stenberg, "I don’t think it’s necessarily about a gay relationship... the relationships, they’re not really defined. And I think that’s kind of the point — it’s just people who love each other."

Jack and Mark's relationship isn't the film's only progressive aspect; Stenberg's Sarah defies the tradition of the supporting female character alongside male leads by being an interesting, fully realized person with a life and personality all her own. While the movie doesn't ignore gender roles completely — there's a great scene in which Sarah freaks out the boys by graphically describing a period — the trio's relationships have little to do with being male or female, and far more with the intricacies of interest and attachment. Says Stenberg, "That’s obviously what got me so excited about this film, seeing these relationships between boys and girls without an emphasis on their gender necessarily... [Sarah's] friendship with them is not separated."

As a supporting character, Sara does have fewer plotlines and scenes than Jack and Mark, but her importance to the film is undeniable, especially when it comes to portraying the all too realistic dynamic of a friendship between two teens and their eager, younger friend. Says Stenberg, "She really looks up to them and wants to be around them no matter what. And I think that’s really cool, because it’s honestly how I felt a lot in high school and in romantic relationships."

Yet despite As You Are's clear relevancy to today's teens, there's a high probability that, if it gets distribution, its dark themes and displays of violence will prevent some adolescents from getting to the theater. The film's actors are aware of this, but, as Stenberg says with a laugh, "If anyone’s giving it pushback, we don’t really care about them."

And even if some teens are prevented from seeing it, both actors acknowledge that streaming, legal or not, will bring As You Are to audiences. Says Campbell, "As I love to belittle the Internet sometimes, that’s what’s so wonderful about it. This movie is gonna get seen."

And when it does, its teen stars will undoubtedly be the talk of the town.