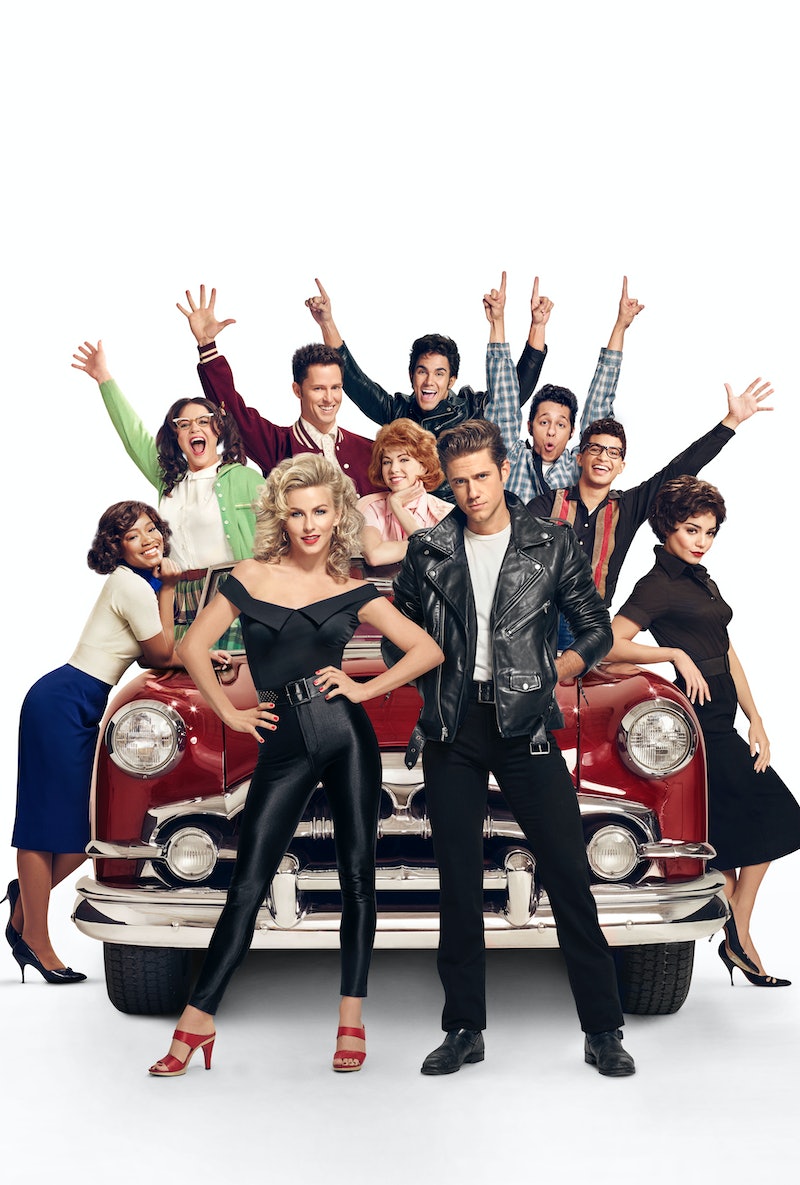 Fans have been waiting a long time for this day and it’s finally here. Grease Live! airs Sunday night on FOX and I, for one, will definitely be watching and singing along to all the Rydell High tunes. Maybe it’s been a while since you watched the movie version or maybe you’ve never seen it before (in which case you should stop reading this and go watch it immediately), but before you watch the FOX production, it's time to re-visit the original characters. Grease Live! has a lot to live up to, considering the great actors who filled the roles in the 1978 movie, but it seems like there are some promising candidates. I've rounded up the Grease movie cast alongside the new guys to help prep for what you’re about to watch.

Briefly, for those of you who have never seen the movie (which is hopefully no one), Sandy and Danny Zuko meet and have a summer romance that ends as they head back home from vacation. By some crazy coincidence, Sandy’s family ends up moving and she attends Danny’s school. The two run in very different cliques and their romance is tested as they get to know each other in a very different setting. Basically, there’s a lot of awesome music, tons of dancing and some sweet '50s costumes. But I’ll let the trailer speak for itself…

Now, here's who first brought Grease's characters to the screen, and who will be taking on those iconic roles on Sunday night.

After her big role playing Sandy, Olivia Newton-John went on to star in Xanadu and some other films, but she’s really made a living, just being herself. She’s been a guest judge on Dancing with The Stars, RuPaul’s Drag Race, and many other shows throughout the years.

Julianne Hough is probably most widely known for being one of the dancers on Dancing with The Stars. She has taken a step back to be a judge recently and has been in movies including Dirty Grandpa, Safe Haven, Rock of Ages, and Footloose.

Stockard Channing is still all over your TV and in movies. I’ll just name a few notable things she’s done including The West Wing, Practical Magic, The First Wives Club, and most recently, The Good Wife.

We all met Vanessa Hudgens when she played Gabriella Montez in High School Musical. Since then she’s done Sucker Punch, Spring Breakers, and Beastly.

Obviously, John Travolta went on to do a million projects after this, so I’ll just mention that we can all see Travolta in The People v. O.J. Simpson: American Crime Story on Feb. 2 on FX.

Gossip Girl fans will recognize the new Danny Zuko as Nate Archibald’s cousin, Trip van der Bilt. He was also in Les Miserables and the show Graceland, as well as many theater productions.

After playing Marty in the hit musical, Dinah Manoff went on to star in a show called Empty Nest that ran from 1988-1995. She’s also guest starred on various shows including The Golden Girls, Touched by an Angel, and State of Grace.

Keke Palmer is all over the place these days. She got her start on True Jackson, VP, but has gone on to things like Masters of Sex and most recently, she played Zayday Williams on Scream Queens.

Although Jamie Donnelly hasn’t been in a ton of stuff since she played Jan in Grease, she does have some big name credits including a role in Black Mass and Showtime’s Ray Donovan.

Most importantly, Kether plays Lindsay Jillian on You’re the Worst, but that’s not the only place we’ve seen her. Before that she played one of the former Barton Bellas in Pitch Perfect. Therefore, we know she’s got some pipes.

Edd Byrnes was widely known for his role on the TV show 77 Sunset Strip, which was popular long before Grease came out. After Grease he guest starred on shows like Charlie’s Angels, The Love Boat, and Murder, She Wrote, but he hasn't had any acting credits since 1999.

Hello A.C. Slater! Do we really see Mario Lopez as anyone else but his Saved by the Bell character? He’s also been the host of Extra for nine years.

Kenickie is the ultimate bad boy and Jeff Conaway nailed the role. After the film he went on to star in lots of things including the TV show Taxi. Some of his other credits include Berrenger’s, Sunset Strip, Murder, She Wrote, Babylon 5, and many more things I’ve never heard of. He passed away in 2011 at the age of 60.

Carlos PenaVega's fame can be traced back to a boy band called Big Time Rush. The band had a show on Nickelodeon — not surprisingly also titled Big Time Rush — and he competed on Dancing With The Stars, so he has something in common with FOX's Sandy.

Michael Tucci made a long TV career after playing Sonny on Grease. He starred in It’s Garry Shandling’s Show, The Paper Chase, Flying Blind, and Diagnosis Murder. He was also in the Johnny Depp movie Blow.

Andrew Call is getting his big break as Sonny in Grease Live! when it comes to TV. Previously, ae appeared in two episodes of As The World Turns and a movie called Geezer and a few different Broadway shows. But when it comes to the screen, this is just the beginning for Call.

I’m pretty sure Frenchy was most people’s favorite character and as it turns out, Didi Conn will be making an appearance in Grease Live! as Vi (originally portrayed by Joan Blondell). Like I said, everyone loved her. After the movie, she played Denise Florence Stevens Downey in an '80s show called Benson. She also played Stacy Jones on Shining Time Station in the '90s. She also made a quick appearance on an episode of Amazon’s Transparent in Season 2.

Call me, maybe? Everyone knows Carly Rae Jepson’s famous tune and should be able to agree that she’s pretty much the perfect person to play Frenchy.

After Grease, Barry Pearl went on to guest star on tons of different TV series including Eight is Enough, Falcon Crest, Growing Pains, Beverly Hills, 90210, ER, Baywatch, Even Stevens, Criminal Minds and House M.D. Most importantly, he was in My Favorite Martian with Christopher Lloyd. Like the original Frenchy, Pearl will make an appearance in Grease Live!

Jordan Fisher has been in a slew of pre-teen shows/movies including The Secret Life of the American Teenager, Teen Beach Movie, Teen Beach 2, Liv and Maddie, and Teen Wolf.

If the success of the 1978 Grease's cast is any indication, there are many big things ahead for the stars of Grease Live!