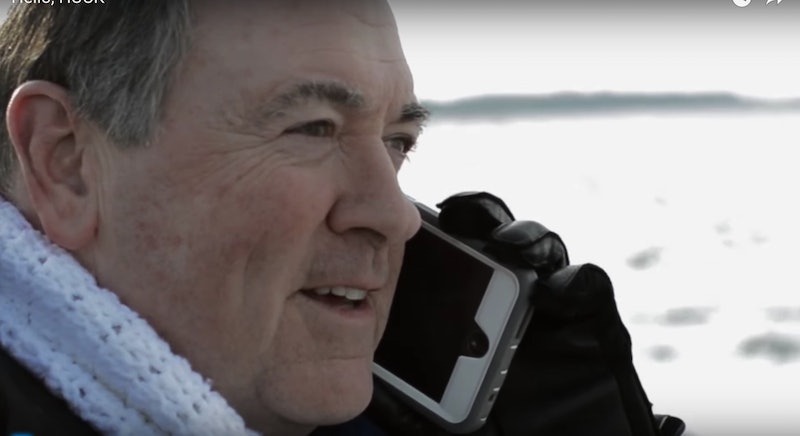 Wow. In the never-ending, attention-grabbing game that has become the 2016 Republican presidential campaign, former Arkansas Governor Mike Huckabee made an Adele "Hello" parody campaign video. Again, wow. Apparently Adele passed Huckabee’s strict musical purity test — during an interview with People last year, he criticized the Barack and Michelle Obama for allowing their daughters to listen to Beyoncé, calling her music “mental poison.” If only he had disapproved of Adele too, then this video would have never existed.

The video not only butchers the original song lyrics, but also badly tries to pay homage to Adele’s music video as well, with extreme close-ups and an orange filter on some shots. In a daring creative choice, Huckabee opted to use an iPhone rather than go fully authentic and dig up an old flip phone — also sadly missing was the fur jacket and winged eye-liner.

Huckabee mostly spends three minutes poking fun at the other candidates, or “the other 15” as he refers to his peers in the song. He takes somewhat specific aim at Ted Cruz, but never really crosses the line into mean or hilarious. Probably the only genuinely funny moment in the whole video is a fake text from Hillary Clinton telling Huckabee that she misses Arkansas, an allusion to their shared history in the state’s governor’s mansion.

Here are the full lyrics:

As laughably terrible as the song is, the idea behind the video is actually kind of endearing. Huckabee is polling seventh nationally and eighth in Iowa, and as a previous presidential contender, he has to be realistic about his chances. He could be mud-slinging and running attack ads, trying to claw his way ahead of Christie or Bush just for bragging rights, but he's just poking fun at the race in general and highlighting the unique familiarity that presidential candidates have with Iowans. It looks like someone in Huckabee's campaign missed the pretty ironic fact that, yes, Hillary Clinton did the nae-nae on Ellen , and their response was with this video, but there have been worse campaign choices this election season. If this is how he chooses to spend his campaign dollars, who can really object?

The caucus is in just five days, and this video could definitely score Huckabee some points with the people of Iowa. I just sincerely hope that Adele has seen the video in all its ridiculous glory.