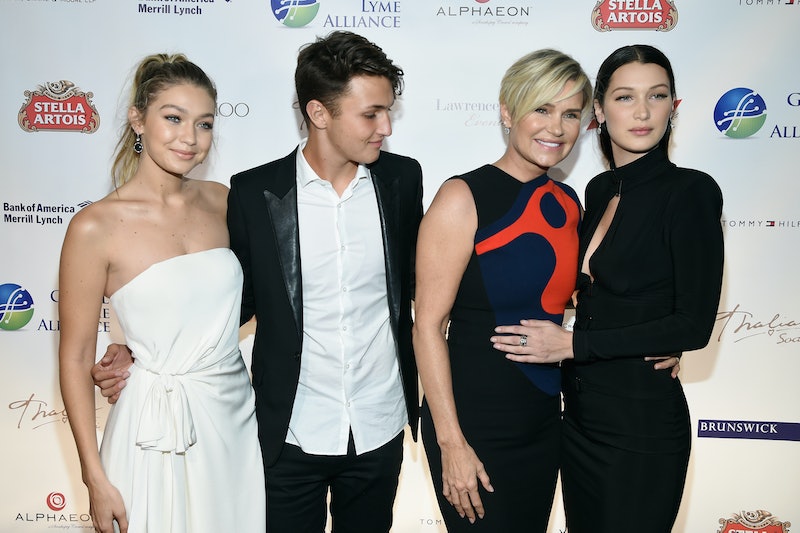 Given the amount of speculation about Yolanda Foster's battle with Lyme disease on this season of The Real Housewives of Beverly Hills, it was definitely a bit shocking when she revealed that two of her children, Bella and Anwar Hadid, were also battling the same disease. Foster and her family hadn't previously revealed that information to the other Housewives, and they seemed to be in disbelief that it's possible for multiple members of the same family to have chronic Lyme disease. Foster revealed Bella and Anwar's struggles back in October at Global Lyme Alliance inaugural gala, leading many to speculate how exactly Yolanda, Bella, and Anwar all contracted Lyme disease in the first place.

Foster has spoken at length about her own battle with Lyme disease, but information regarding Bella and Anwar's struggles have not been made as public, until now. It's understandable, given how young they are (19 and 16, respectively) and both with budding modeling careers, that perhaps they wanted to keep their struggles away from the glare of social media and blogs.

After the Jan. 26 episode of RHOBH showed some Housewives questioning whether Bella and Anwar have the illness, a new post on Foster's Bravo blog was published, in which she addressed the speculation regarding her children head-on. She wrote, "I have nothing to prove and know that my journey is public due to the job I've chosen as a Housewife, but I can't accept something so delicate as my children's health being talked about in such a way."

As for how Anwar and Bella both contracted Lyme disease, it actually seems pretty simple. In her blog, Foster added,

Bella and Anwar were diagnosed at the end of 2013 and have been in extensive holistic treatment ever since. It's very common for multiple family members to be affected by Lyme disease. The children and I lived on a horse ranch in Santa Barbara for 10 years and spent the majority of our time outside in nature.

Bella had to give up her lifelong dream of having a professional riding career and a shot at the Olympics due to her severe symptoms and inability to ride. This was the biggest heartbreak of her life and an extremely sensitive subject for her. She is resilient and focused on a new direction — she's made a name for herself in the modeling industry while she struggles with symptoms of chronic Lyme every day.

Anwar still does regular Ozone/UVI treatments and has had great success with LDI. I am glad to say that he is doing much better and finished a football season with great scores and healthy energy.

A doctor, who while he didn't treat the Foster-Hadid family, told Us Weekly that "it's not uncommon that a few members of a family have Lyme disease" because of sharing the same environment — in their case, the horse farm. While concrete details of the family's diagnoses have not yet been revealed, Foster's desire to use her celebrity as an advocate for the Lyme disease cause is admirable. Here's hoping that Bella, Anwar, and Yolanda are able to find the best treatment for them and a speedy return to full health as soon as possible.

More like this
‘RHOBH’ Newcomer Sheree Zampino Is Still Close To Ex-Husband Will Smith
By Brad Witter
The “Ugly” Trends Bella Hadid Makes Look Cool
By Allie Fasanella
JoJo Fletcher & Jordan Rodgers Got Married In A “Playful & Fun” Wedding
By Grace Wehniainen
The Richest 'Bling Empire' Cast Member Is...
By Hugh McIntyre
Get Even More From Bustle — Sign Up For The Newsletter