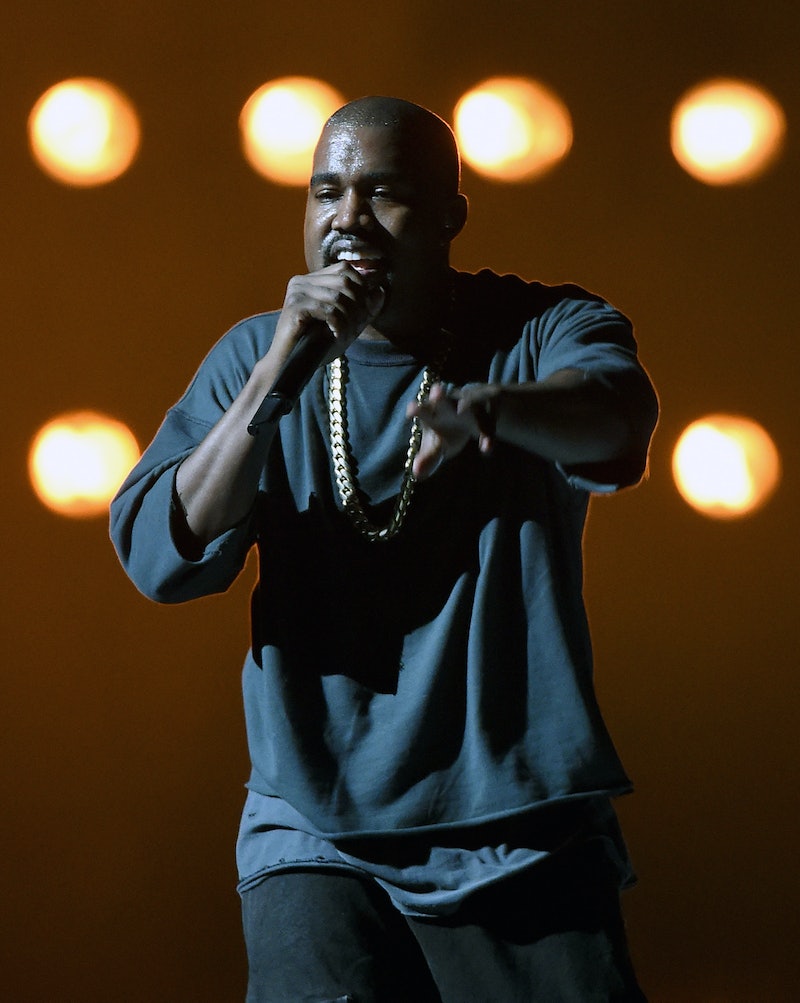 In the midst of a week that included Rob Kardashian dating Blac Chyna and therefore becoming potential step-parents with his half-sister Kylie Jenner, Kanye West and Wiz Khalifa are busy duking it out on Twitter in a battle that involves weed, Kim Kardashian, Amber Rose, and pants. Yes, you read that right. But while you may have been following along on Twitter, you might be confused about how Kanye West and Wiz Khalifa's feud started.

Before I get into the specifics of the embarrassingly public Twitter feud, let's take a step back and fill in some missing pieces here. Though the rappers' fight (seemingly) has nothing to do with the whole Rob Kardashian/Blac Chyna debacle, it undoubtedly feeds into the whole thing. A quick recap for ya: Before he was married to Kim Kardashian, West dated Amber Rose, the mother of Wiz Khalifa's child. Rose, who is best friends with Blac Chyna, has previously feuded with the Kardashian sisters in an attempt to diss Chyna's ex Tyga, who is currently dating Kylie Jenner. It is truly a mess of epic proportions.

Now, to get down to the nitty gritty of it all, Wiz ignited the feud by throwing shade at Yeezy, who recently changed his forthcoming album title from SWISH to WAVES. Wiz did not approve and called out West for seemingly hocking the term, which both Urban Dictionary and Khalifa credit to rapper Max B:

After a few more tweets about the wave, it seemed like Wiz got back to his normal self and started tweeting about weed, as he usually does:

(KK stands for "King Kush," a product he has talked about before in interviews, like this one here.) West, on the other hand, took this to stand for "Kim Kardashian" — not that off base, considering those are some famous initials right there:

Wiz then called Yeezy out hard for not getting the reference and used West's lack of weed knowledge in his argument as to why West shouldn't have WAVES as an album title:

It was then that West started posting some truly over-the-top, and inappropriate, tweets, like references to Wiz and Amber Rose's son Sebastian and Rose's stripper past:

(Leave it to Kanye West to reference his own damn song here with that "18 years" line.)

Ultimately, West thanked Wiz for promoting his album and please God let this feud die with this tweet:

Genuinely OUT. OF. CONTROL.