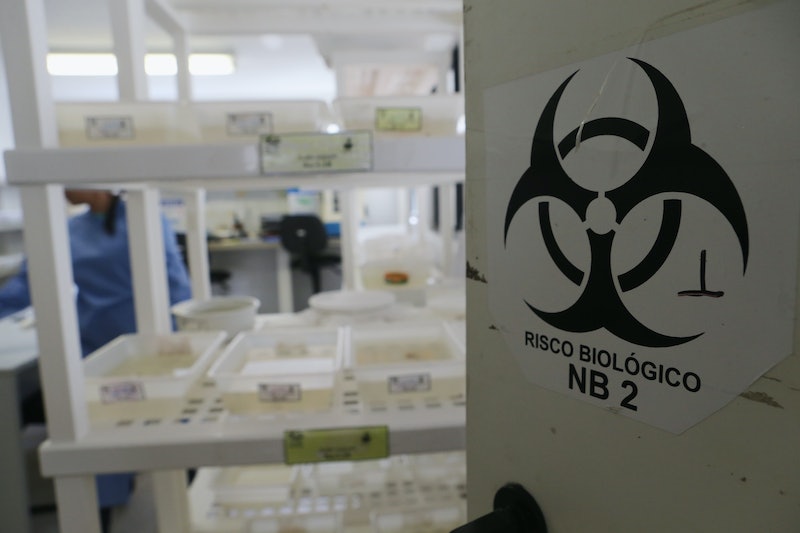 More and more news is emerging about the Zika virus as officials warn of its spread. The mosquito-borne illness has become a major concern in Brazil, where the country is rapidly preparing for the summer Olympics amid a Zika virus crisis. An uptick in babies born with microcephaly to mothers who had contracted the virus while pregnant has forced the Brazilian government to issue strict warnings to expecting mothers and those looking to start a family. Quotes about the Zika virus from officials around the world show just how widespread the virus has become as well as the threat it poses.

Officials in Colombia are now joining Brazil in issuing a statement warning of the spread of Zika virus. Already there have been 13,800 reported cases of people infected and that number is predicted to continue to increase as officials are warning all areas located below 7,200 feet to declare green alerts in order to prepare for the virus as it continues in its "expansion phase," according to Luis Fernando Correa, head of the ministry's Office of Emergency Management and Disaster. The country is expected to surpass 60,000 confirmed diagnoses of Zika virus. Experts and officials around the world are issuing statements for the virus, the symptoms of which mimic those of dengue fever, a similarly serious affliction.

The World Health Organization's Pan American Health Organization has issued multiple statements about the Zika virus' threat to South America as well as neighboring regions. In their most recent warning, officials with WHO/PAHO advised countries with confirmed diagnoses to be on high alert and do their best for an influx of patients with Zika virus. The organization states in a press release:

With the Zika virus now circulating in 18 countries and territories of Latin America and the Caribbean, the Pan American Health Organization (PAHO) is recommending that its member countries monitor and report any increases in neurological syndromes and congenital anomalies, which growing evidence suggests may be linked to Zika infections.

NPR Global Health Correspondent Jason Beaubien and South America Correspondent Lourdes Garcia-Navarro participated in a Q&A about the Zika virus, offering up their expert knowledge as well as anecdotes from doctors and officials that they have interviewed. Right off the bat, the duo highlighted the severity of the virus by answering the question "how concerned should I be?" Beaubien stated that, according to researchers, the sheer lack of knowledge regarding Zika virus is what's truly harrowing. What Garcia-Navarro said about its threat shows just how serious the threat of contracting Zika virus has become. She said:

One of the researchers in Brazil said this is even more of a concern than Ebola in certain ways. With Zika, 1 in 5 people will show symptoms, but the majority will be asymptomatic. So a woman who is pregnant might not know that she has the virus.

The Centers For Disease Control

Due to its severity and ongoing spread, the Center for Disease Control has set up an entire page about the Zika virus with information on infected areas and prevention techniques as well as a general Q&A. The CDC has yet to issue a press release about the virus, as they currently do not list the United States as a region with a Zika virus outbreak. However, when it comes to those traveling to places where the virus is currently prevalent, the CDC advises clinicians as well as patients to be on the lookout for these symptoms. The CDC states:

Zika virus infection should be considered in patients with acute onset of fever, maculopapular rash, arthralgia or conjunctivitis, who traveled to areas with ongoing transmission in the two weeks prior to illness onset. Clinical disease usually is mild. However, during the current outbreak, Zika virus infections have been confirmed in several infants with microcephaly and in fetal losses in women infected during pregnancy. We do not yet understand the full spectrum of outcomes that might be associated with infection during pregnancy, nor the factors that might increase risk to the fetus.

The Minnesota Post sat down with epidemiologist Dave Neitzel to talk about the Zika virus and its impact in the states. While the doctor had some encouraging things to say about the virus' spread into America, he nonetheless could offer little support for those who have contracted the virus. There is no set treatment nor is there a vaccine for the Zika virus. Neitzel continues:

Doctors may be able to offer some supportive care to reduce the severity of the fever and lesson some of the joint pain, but there’s nothing that directly treats the virus. The virus just goes through the person’s system, and then is gone. Unfortunately, though, humans are the reservoir for the virus. Mosquitoes get the virus from infected humans who are carrying the virus. So the virus circulates from mosquitoes to people and then back to the mosquitoes again.

Jamaica is already working with media outlets and government officials despite the virus having not spread to the country. Sen. Sandrea Falconer, who also serves as the Minister with Responsibility for Information in the Office of the Prime Minister had this to say about Jamaica's preventative response to the Zika virus:

The Zika virus is already identified in countries in the Americas, including the Caribbean countries of Barbados, Guyana, and even closer to home in Haiti. As you can well imagine, it is therefore only a matter of time before it reaches Jamaica’s shores. This matter is so important that we are inviting the media to join us in bringing the information to the people of Jamaica, because when the people are armed with information they can help to prevent getting [Zika].

National Institute of Allergy and Infectious Diseases Director Dr. Anthony Fauci has continued to stress the importance of directing his organization's focus on the Zika virus as well as encouraging other doctors and institutions to do so. In a recent interview, Fauci stressed a comprehensive approach towards combating the spread of the virus. He was hopeful about an eventual vaccine, citing research done on similar afflictions. Fauci said:

I’ve made it clear that we want to put a full-court press. I’m saying, ‘Folks, this is it, all hands on deck for Zika, this is really important.’ We are rapidly pushing.

When most people think of the Zika virus, they often think of the ways that it has impacted pregnant women who have contracted the virus — a potential link that is still being researched to determine how Zika virus may be affecting expectant mothers. Entomology Professor Bill Walt stressed that such research is still ongoing but advises those who may be pregnant to take particular caution when considering traveling to an area with confirmed cases of the Zika virus. Walt said:

It does not hurt to be cautious, especially given the purported link between Zika virus infection of pregnant women and microcephaly in their infants. That link is currently circumstantial. Until public health agencies can definitively determine whether there is a link between Zika infection and birth defects, pregnant women should use caution and avoid traveling abroad to places where Zika transmission is occurring in outbreak conditions.