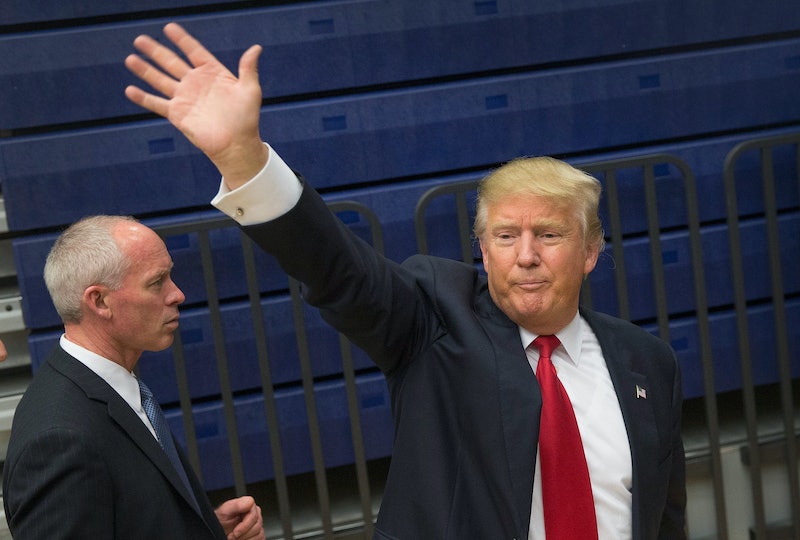 The big night is nearly upon us, and the whole political world is waiting ― Thursday night will be the final GOP debate before the Iowa caucuses. It's the last chance for each candidate to make their case to the country, and more specifically, to denizens of the Hawkeye State, and as such, it's expected to get a lot of eyeballs. But now it seems like the stage will be short one major contender, and it's going to make things more than a little awkward: Here are the ways Donald Trump will be at the debate, even though he's refusing to show up.

If you've been looking forward to this latest Fox News debate, the seventh out of 12 scheduled by the RNC this primary season, then you've probably already heard that the Trump campaign is refusing to participate. The crux of the issue is that during the first GOP debate, also hosted by Fox News, moderator Megyn Kelly asked Trump a question about his long, well-documented history of misogynistic remarks, verbal attacks, and crude tweets. In Trump's world, this is clearly an unforgivable sin ― he's since called her a "bimbo," joked that she was menstruating during the debate (which he later unconvincingly denied), and now, he's sitting out the debate because Fox News refused to remove her as a moderator.

All things considered, it's a pretty sad, nasty state of affairs. And it won't be easy for the other candidates either ― while it might be nice to get an entire evening to themselves, Trump will be looming large of the proceedings, whether he's there or not.

In the previous six debates, the leader in the polls has stood center stage, but now that pattern is going to be broken. Trump's withdrawal ostensibly means that it'll be Texas Sen. Ted Cruz in that position now, with the close-calls and distant also-rans fanning out on either side.

This is just one of many reasons why Trump is making such a catastrophic blunder here ― beyond simply refusing to debate a week from the caucuses, he's effectively handing Cruz the role of front-runner for Thursday night. Unless Fox News decided to really hang Trump out to dry and left an empty lectern out there.

There Are Always Questions About Trump

How many times have we seen other Republican candidates exasperatedly answer questions about Trump? It seems to come up virtually every debate, with some question along the lines of "hey, Donald Trump, isn't that weird?" Or sometimes, "Hey, are you gonna let him say that about you?"

It's got to be a frustrating feeling for a career politician, to have their own chance to shine co-opted by such an obviously disingenuous newcomer. But it's a feeling they may well experience again on Thursday night, so they better get ready. All the while, Trump will be cooling his heels somewhere watching on TV, his thumb hanging over the mute button for whenever Jeb Bush starts talking.

He's Still In The Lead, So The Field Needs To Attack

Sure, the polls in Iowa have tightened up. But Trump is still the clear front-runner at the moment, based on what both state and national polls are showing ― he leads by about 16 points nationally, as well as in a slew of vital primary states like South Carolina, Florida, and New Hampshire.

What this means, in simple terms, is that the other candidates are probably chomping at the bit to attack, and Thursday night will be maybe the best possible time to do so. Trump is a very talented bully, and he always has a diversionary or reactionary arrow ready in his quiver if someone criticizes him. But he decided he didn't want to be there on Thursday, which means the rest of the field gets a completely free night to drag him through the dirt.

Again, this is a huge part of why it's so bizarre that Trump is refusing to show ― with Iowa just days away, it's almost as if he's trying to hurt his own chances.

It's hard to predict how exactly Kelly will react to this awkward situation when she's in the moment ― on the one hand, you could see her taking a "forget the drama, focus on who's here" approach, but on the other, it's going to be on everyone's minds. After all, Fox News essentially accepted the fact that Trump wouldn't show because they weren't willing to punish Kelly over his egregious whining, and as such, you'd think there might be a moment of acknowledgment of that fact.

It's not necessarily incumbent on Kelly to explain what's up, however. That could just as easily be done by one of her colleagues on the moderator panel, Bret Baier and Chris Wallace.

If Trump actually became president, he couldn't possibly keep his Twitter account, right? Well, he'll be under no such restraints on Thursday. While he is scheduled to take part in a fundraiser for wounded soldiers on Thursday night, it's hard not to expect that Trump will drop a few debate-related tweets throughout the night, and if history is any judge, he'll stir up a lot of attention and controversy by it. Hopefully he doesn't say anything too bad, although at this point, it's hard to imagine how far he'd have to go to actually pay a price.

If one thing's for sure, sadly, it's that some of these tweets will end up directed at Kelly, and she's already dealt with more than her fair share of obnoxious, virulent Trump supporters ― after the billionaire's post-debate tweet-storms in August, Kelly reportedly received death threats.