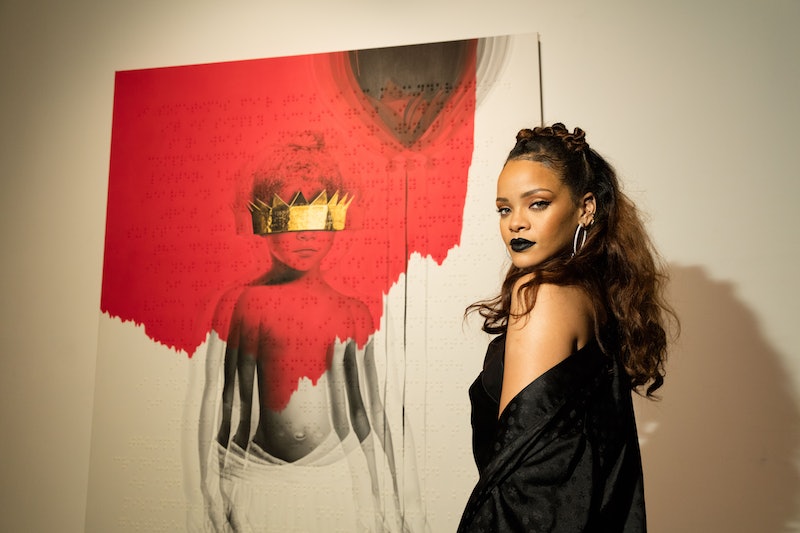 After a confusing leak, it turns out Rihanna's new album ANTI is really out for real. On Wednesday night, the long awaited release was made available in full on Tidal, the music streaming site part owned by the singer. ANTI was mistakenly was uploaded on Tidal earlier in the day, allowing fans to snag screenshots of the track list as well as full versions of the album's songs. Check out the album on Tidal here.

According to the Verge, ANTI will exclusively be on Tidal for one week. On Jan. 29, a deluxe version of Rihanna's eighth studio album will be released that includes three bonus tracks. While you do need a Tidal subscription to access the full album, you can sign up for a free 30-day trial or access 30-second samples of the track list as a visitor. As of Wednesday evening, ANTI was not available for streaming on other services like Spotify.

The surprise drop comes the same day as RiRi released the first full single off the album, "Work," a bouncy beat that features the talents of rapper Drake. Noticeably missing from the album is last summer's hard hitting "Bitch Better Have My Money" as well as Rihanna's collaboration with Paul McCartney and Kanye West, "FourFiveSeconds."

ANTI has been the purple unicorn of the music industry for the better part of a year, and after cryptic Instagram "ANTIdiaRY" clips and reported drama over the album's direction, the unexpected release is a welcome surprise. ANTI, as a whole, takes a much slower and introspective approach than what fans may have become accustomed to, which might just be where the album is drawing its name from.

Make no mistake, though. ANTI is RiRi through and through, and the mystery of Rihanna's missing album has been solved.

More like this
The Jonas Brothers' New Album Has A Very Meta Name
By Alyssa Lapid
The Beyhive Is Mad At Harry Styles After Beyoncé’s Album Of The Year Snub
By Jake Viswanath
Everything To Know About Rihanna’s Staggering Net Worth
By Hugh McIntyre
Rihanna’s Collaborators, Ranked By How Likely They Are To Perform At The Super Bowl
By Jake Viswanath
Get Even More From Bustle — Sign Up For The Newsletter
From hair trends to relationship advice, our daily newsletter has everything you need to sound like a person who’s on TikTok, even if you aren’t.