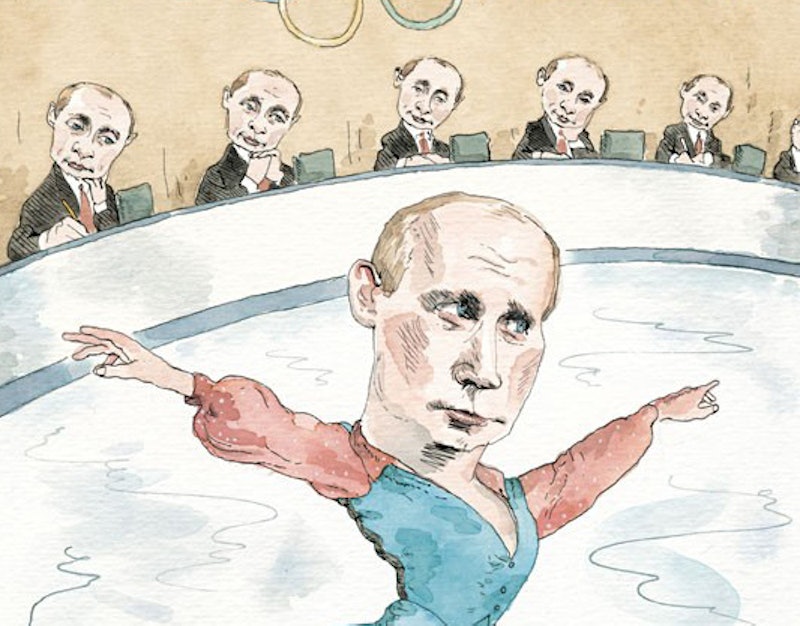 With the Sochi Winter Olympics less than two weeks away, Sochi mayor Anatoly Pakhomov has, um, shed some light on the country's notorious anti-gay laws. It's not that gay people aren't welcome at the Games, Pakhomov explained — they are, just as long as they "don't impose their habits on others." And that's because, according to Anatoly, there aren't any LGBT people in Sochi at the moment.

And if there are? "I don't bloody know them," Pakhomov told the BBC.

Right. So, the mayor of Sochi is publicly claiming there are no gay people in the entire city of Sochi — which, by the by, has a population of 350,000. Anatoly's ridiculous comments echo those of Iranian ex-President Ahmadinejad, who told Columbia University back in 2007: "We don't have homosexuals, like in your country."

Meanwhile, in a bizarre attempt to clarify Russia's position on homosexuality, President Vladimir Putin muddied the waters even further last week. At a press event, Putin announced that homosexuals would be welcome in Sochi for the Olympics, on the condition that they "leave children alone".

Meanwhile, the New Yorker has unveiled a very special Putin-themed cover, which sees the Sochi Games populated by Putin clones. It's called "Jury Of His Peers."

“Mr. Putin is a gift to caricaturists," writes cartoonist Barry Blitt on the New Yorker website, "(but to humanity in general, not so much)."

So what does this all mean for LGBT athletes at Sochi? Well, they can't speak up for Russia's LGBT populace, as music legend Elton John did in an open letter last week. Because the law is deliberately vague, banning any kind of public demonstration of homosexuality, visiting athletes could be arrested, fined, and/or deported for making comments about their sexuality. They'll also risk the same penalties if they speak up for Russia's LGBT community, whether in protest or in direct statements to the press.

So, athletes such as the Australian bobsleigh team, which is planning to display the equality campaign "Principle 6" logo on their sled, could face arrest. While Anatoly's comments sound merely idiotic to us, it's his public censoring of Russia's gay community that we should be worried about.