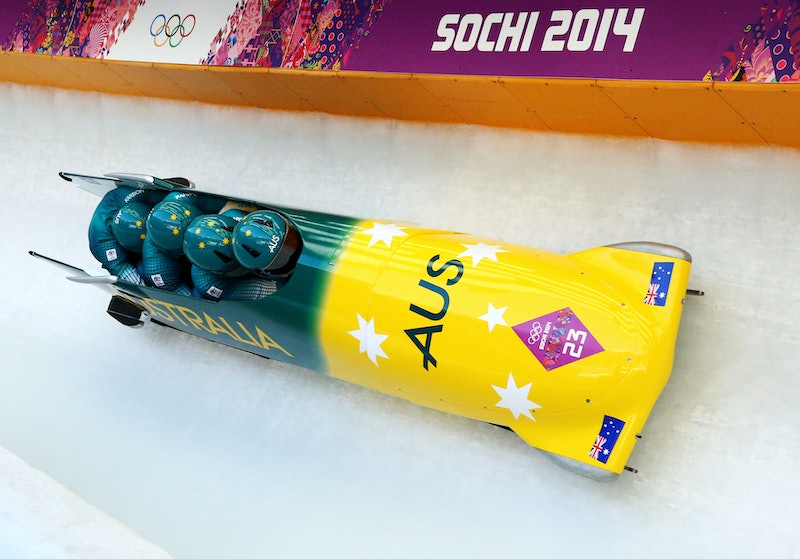 If Russia's anti-gay laws were meant to keep LGBT people (and their supporters) away from the Sochi Winter Olympics, then President Vladimir Putin must be feeling pretty stupid right about now. Yet another competing country — this time, Australia — has backed Russian LGBT rights in face of the host nation's homophobia. Australia's (already sexy) bobsled teams just got sexier when they announced this week that they will be sponsored by Principle 6, an LGBT rights campaign.

Founded by non-profit organizations, All Out and Athlete Ally, the Principle 6 campaign takes its name from the corresponding principle in the Olympic Charter which states: "Any form of discrimination with regard to a country or a person on grounds of race, religion, politics, gender or otherwise is incompatible with belonging to the Olympic Movement." Now, the Australian men and women's bobsled teams have openly expressed their support for the campaign, with men's team captain Heath Spence, stating: “We’re against discrimination in sport, full stop. That means we also oppose discrimination against gay and lesbian athletes.”

Whether it's President Obama appointing Billie Jean King as a Sochi ambassador, or the German and French leaders vowing to skip the Winter Olympics altogether, the competing nations really are taking an overt stand against Russia's constitutional homophobia.

The spotlight on Russia's renewed anti-gay laws and what it meant for international athletes competing at Sochi really came to the fore last summer when the country instituted a law banning "propaganda promoting non-traditional sexual relations" amongst minors. Bar one abstention, the law passed 436 votes to nil. As well as making it a crime to distribute material on gay rights, the new bill also introduced fines for individuals and media groups found guilty of breaking the law, as well as special fines for foreigners — something immediately worrisome to the Olympic committee and dozens of Olympian hopefuls.

Criticism of Russia's anti-gay laws and its repercussions for Sochi have in turn only further highlighted the country's paltry record on human rights. In December, Putin began a temporary amnesty on political prisoners, releasing the two imprisoned Pussy Riot members from a Siberian jail, along with Greenpeace activists, the Arctic 30, and a number of other anarchic enemies of the state. This lead commentators to wonder if Putin might also make some kind of adjustment to its virulent, renewed anti-gay laws. Instead, he's instituted a ban on all kinds of activism during the Olympics instead.

"Putin’s convinced the West is trying to foment revolution in Russia by weakening its moral foundations. That’s why nothing the West says can influence him at all on issues like gay rights. A rift with the West only makes him look stronger at home," Marc Bennett, author of Kicking off the Kremlin, told UK Metro.

But as Australian bobsled team captain Spence points out, sensitive men can be strong too: "us bobsledders are the biggest, the strongest, the fastest athletes in the Winter Olympics. And there’s two or four of us jammed into a sled. If we can support gay rights, why can’t everybody else?"