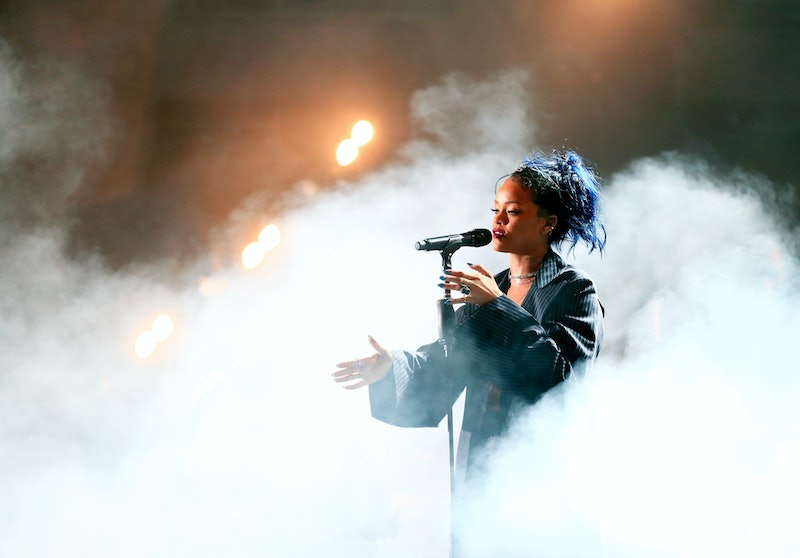 RiRi fans have waited a long time for her new ANTI album to drop — more than three years, actually. And the singer finally dropped it Wednesday night after a series of accidental leaks and releases earlier in the day. She unveiled ANTI single "Work" featuring Drake in the morning, only to be followed by an accidental leak of the entire album on the free streaming service Tidal. Her supposed-to-be-surprise album drop still shocked many fans who are praising the long-awaited album all over social media, and many are wondering who "Kiss It Better" is about.

Her release of the 13-track album comes just one month before the ANTI World Tour kicks off in San Diego on Feb. 26. From "Consideration" (featuring SZA) to "Higher," Rihanna's fans are taking to Twitter to express their love for the long overdue album release. And there's one track in particular that is speaking to their souls.

Rihanna's "Kiss It Better," about wanting a former lover to come back, has us wondering, who really kissed it better? Rihanna has been caught in pics with a few potential suiters this year, and she has most recently been associated with Leonardo DiCaprio. Who knows what rumors are true or false — you can only guess who her emotional song might be about.

Speaking of Leo, could the song be about him?

The two were rumored to be dating at one point last year and were recently pictured together at a nightclub in Paris. Are they rekindling their once romance? Could the Revenant actor be the one Rihanna needs to "Kiss it, kiss it better"?

And if not Leo, might she be singing about Drake?

Rihanna and Drake have reportedly dated on and off since 2009, so could it be that her loss is over the "Hotline Bling"-er? Although the couple shared a tumultuous few years together, RiRi was often spotted at Drake's side at concerts and parties back in 2014.

Or maybe, just maybe, "Kiss It Better" is about Travis Scott?

The couple was first seen together last fall, leaving the Gramercy Theatre in New York — although we're not sure how serious Rihanna was about her relationship with Scott. Did she let him go and then regret it? Could he be the one behind this song?

We'll probably never know who RiRi wrote "Kiss It Better" about, but it doesn't hurt to guess right?