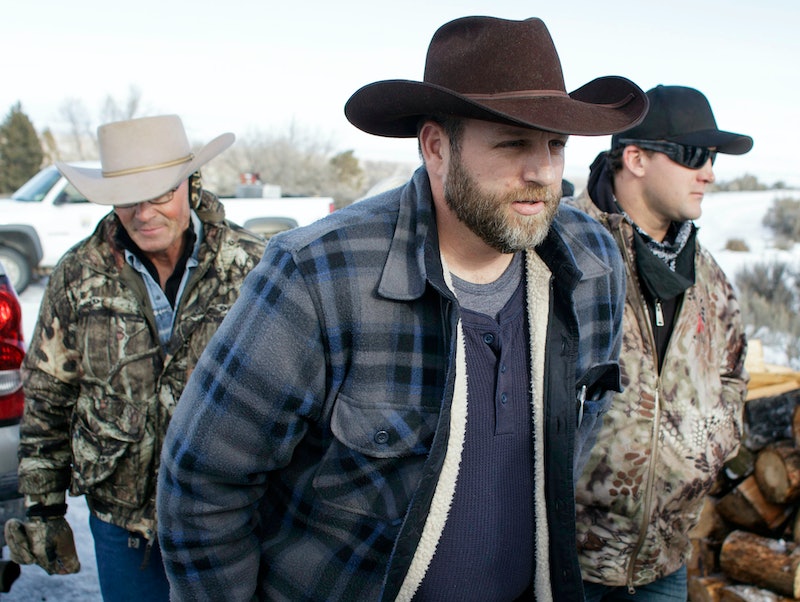 Late Wednesday, one day after his armed band of refuge occupiers was stopped by the police — eight were arrested and one was killed — Oregon protester Ammon Bundy called on the remaining occupiers still at the refuge to go home. In a statement released by his lawyer after appearing in Federal District Court, Bundy threw in the towel — giving up at least on the armed protest and leaving his group's grievances to be worked out through the court system.

Through his lawyer, Bundy said:

To those remaining at the refuge, I love you. Let us take this fight from here. Please stand down. Go home and hug your families. This fight is ours for now in the courts. Please go home.

Whether or not his call would be heeded remained to be seen early Thursday. After the arrests and death of Robert "LaVoy" Finicum Tuesday, the scene intensified at the refuge. For the first time, law enforcement set up barricades and checkpoints at the entrance of the Malheur National Wildlife Refuge outside Burns, Oregon, stopping and interrogating anyone entering or leaving. Law enforcement officials said protesters who wanted to leave peacefully would be allowed to do so. Three more occupiers were arrested Wednesday at the checkpoints; they had turned themselves in.

Those three were in the minority. Seven more remained in the refuge Wednesday, according to David Fry, one of the occupiers, sounding resolute in the decision to stay. “We’re camping out tonight here, by this campfire,” he told the New York Times, “until someone starts listening or until they slaughter us.” Fry then passed around the phone, and other occupiers expressed outrage at the arrest of Ammon Bundy and called the death of Finicum "murder," the Times reported.

The Oregonian reported that those remaining in the refuge seemed skittish and scared as seen through live feeds from within the compound. They abandoned the main buildings and moved to remote areas of the reserve in trucks. One man yelled into the live feed, "They're going to murder all of us ... American people better wake up and get here and fight for your country right now, it is on. If they stop you from getting here, kill them."

Meanwhile, Bundy and the other occupiers arrested Tuesday remain in jail, being denied bail by a federal judge earlier Wednesday. The judge called them flight risks and a danger to public safety. Assistant U.S. Attorney Geoffrey Barrow argued they would return to the refuge to continue the occupation.

The occupiers, led by Bundy, have now been involved in the armed standoff with federal authorities for nearly four weeks. They call themselves the Citizens for Constitutional Freedom and have been widely criticized, deemed domestic terrorists by some for occupying the wildlife refuge. They claim to be protesting of the imprisonment of two fellow ranchers who allegedly set fires on federal lands and also the general high degree of the federal government's ownership and control of land in the area.

Just after midnight local time, Fry uploaded a video to his YouTube channel, explaining the current situation. He said that the remaining occupiers were in a driveway and the video was taken in front of a fire. He explained that after the Tuesday night arrests and death of Finicum, lots of people got out of dodge right away in the hopes to avoid arrest and worried about being labeled "domestic terrorists."

Now, the rest would like to go too, but the roadblocks have made it more difficult. All but one of the remaining protesters were allowed to leave, Fry said in the video, based on his conversation with the FBI negotiator. One of them, though, he said, has a warrant out for his arrest for obstructing a "federal agent worker doing his job," a felony. The other remaining protesters, Fry said, feel that's unfair and are waiting it out. If they drop the charges, though, he said they would go. If not, he said they planned to wait it out:

But if they're not willing to do that, we're all just kind of willing to stay here and see what happens. Are they really going to kill five people?

While the willingness to go out in a blaze of glory seems to have significantly faded for Fry and the other occupiers, they are still a stubborn bunch.