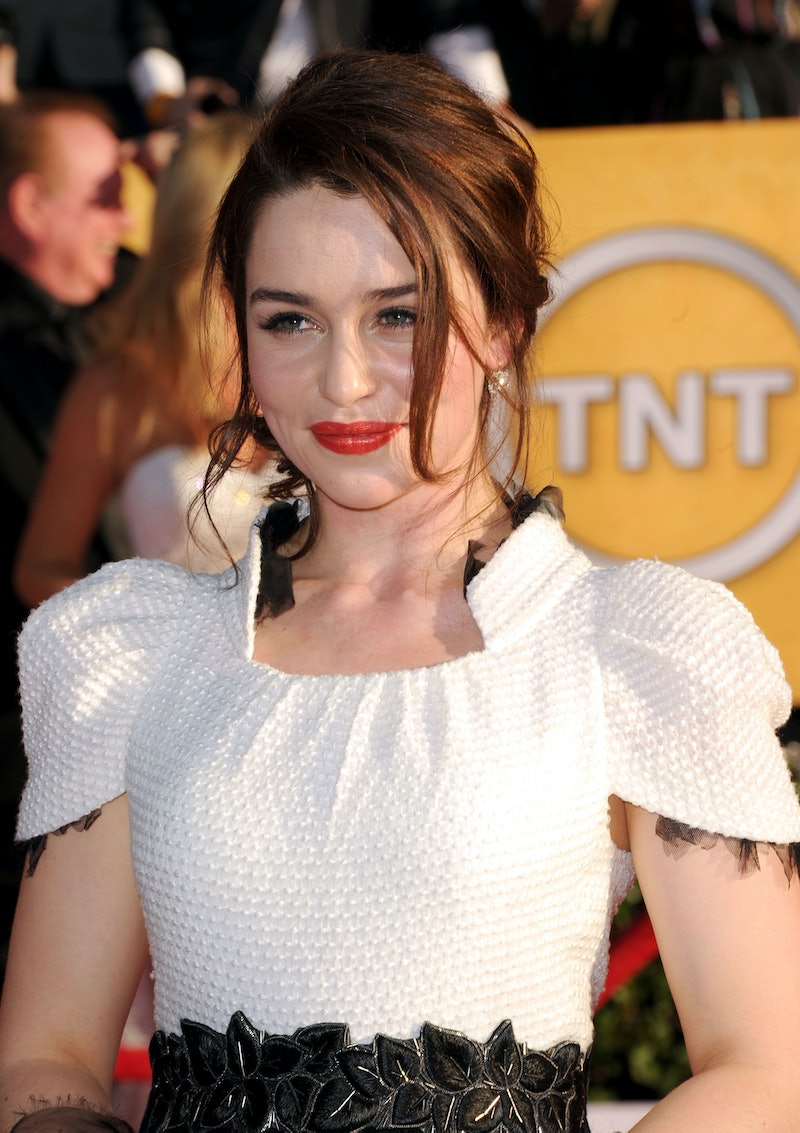 It'll be exciting to see which cast members will be making an appearance at this year's award ceremony — as well as what they're wearing, of course (fingers crossed Kit Harington repeats his 2014 Emmys man-bunned glory). That said, what kind of history does the cast of Game of Thrones have with the Screen Actors Guild Awards red carpet?

The show's been a massive hit since its inception back in 2011 — so massive, in fact, that it's tough to remember that many of its stars were relatively unknown back when it first started. Some of the show's more-established actors (like Dinklage and Sean Bean) had attended the awards before, but for many 2012 (even as late as 2014) was their first time on the SAG Awards red carpet. Let's take a look at some of their first SAG outings:

Peter Dinklage at the 2004 SAG Awards

Lena Headey at the 2012 SAG Awards

Now that is a white dress.

Emilia Clarke at the 2012 SAG Awards

Emilia Clarke stunned in Chanel on her first SAG Awards red carpet, and I feel sure that Daenerys would have approved of the ultra-dramatic skirt.

Kit Harington at the 2012 SAG Awards

So baby-faced, and so, so sad.

Alfie Allen at the 2012 SAG Awards

Oh, alas — Theon before the days of Reek. On a side note, Alfie Allen looks, if possible, even more baby-faced than Kit Harington (and conversely, he's as happy as Harington is sad).

Nikolaj Coster-Waldau at the 2012 SAG Awards

Yeah, Jaime Lannister looks just as good in a bow tie as he does in a suit of armor.

Maisie Williams at the 2014 SAG Awards

The perfect combo of retro glam and modern simplicity.

Sophie Turner at the 2014 SAG Awards

The ribbon at the waist makes this dress look uncomfortably close to crop-top separates featuring a strangely shiny midsection, but other than that, it's a gorgeous look.

Natalie Dormer at the 2014 SAG Awards

If only Margaery Tyrell could rock an undercut this major. It would be the talk of all Highgarden.

Gwendoline Christie at the 2014 SAG Awards

John Bradley-West and Sibel Kekilli at the 2014 SAG Awards

Doesn't this make you wish that Shae and Samwell Tarly could meet?

This pose (and those shoes) are both Melisandre-approved.

Here's hoping the cast of Game of Thrones (not to mention their thrice-crowned stunt team) bring their A game to the 22nd Annual Screen Actors Guild Awards this year, with some serious style and panache that even the most distinguished Westerosii could get behind.

More like this
Anne Hathaway Is Giving Major Princess Mia Vibes On The Cannes Red Carpet
By Sam Ramsden
Elizabeth Olsen's Chris Evans Friendship Update Was Accidentally Hilarious
By Grace Wehniainen
Hayden Panettiere Will Return For 'Scream 6': "We F*cking Won, Scream Fam"
By Jack Irvin and Jake Viswanath
Danny Boyle Knows Exactly Who He Wants To Be The Next James Bond
By Sam Ramsden
Get Even More From Bustle — Sign Up For The Newsletter