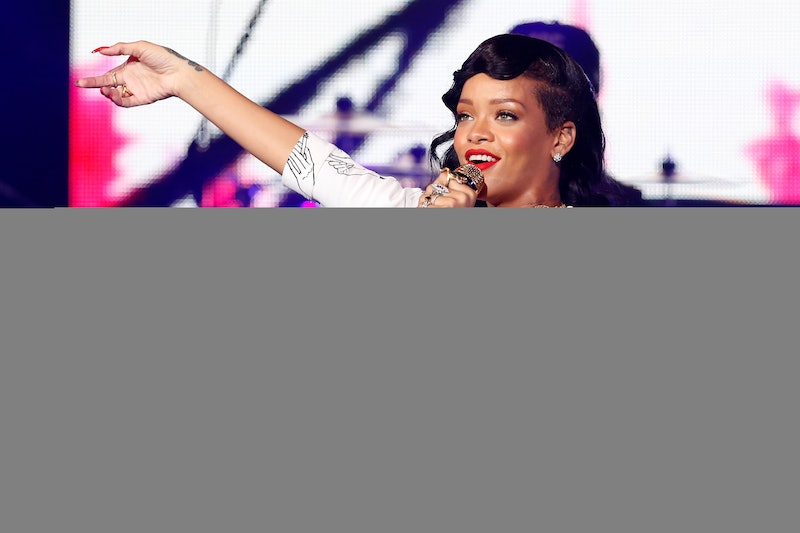 Just last night, the pop star dropped her long awaited album, and already there's one Rihanna song on ANTI you've got to hear. Fans have been waiting three years for new tunes from the Barbadian singer, and they won't be disappointed. In fact, many have already downloaded the album and decided they can't get enough of "Kiss It Better," posting their enthusiastic praise and approval on social media.

This was an early present to RiRi fans. The entire album appeared to have been accidentally leaked on the free streaming service Tidal, which Rihanna co-owns, because it was quickly taken down without a word. That didn't last long, though, and the album is now officially out and exclusively on the platform. A deluxe version will be released on Friday. If you move quickly, you can even get the album for free. Rihanna and Samsung have given out a limited number of free promo codes to use on Tidal, too.

However you get the music, you're going to want to listen to this track first. "Kiss It Better" must be about wanting someone back. Billboard calls it "a mid-tempo anthem rife with electric guitars and a straight-ahead chorus." The lyrics to the chorus do seem rather innocent and straightforward.

But when you get to the verses, you're going to want to know who the song is about. These are not the descriptions of a perfect, happy relationship but one with high highs and low lows.

Been waiting on that sunshineBoy, I think I need that backCan't do it like thatNo one else gonna get it like thatSo I argue, you yell, had to take me backWho cares when it feels like crack?

Even if they don't know who it's about, the new song is crack to Rihanna's fans. Their Twitter posts dedicated to the track are intense.

The fandom has spoken, and it doesn't get any better than "Kiss It Better." She's talking about an ex, sure, but a real fan can relate.

I’ve been waiting up all nightBaby, tell me what’s wrongGo on and make it rightMake it all night long

Rihanna made the three-year wait for the album right with the release, and I'm sure there were more than a few listening way into the wee hours. Make sure to check this jam out. You can find the album on Tidal here.