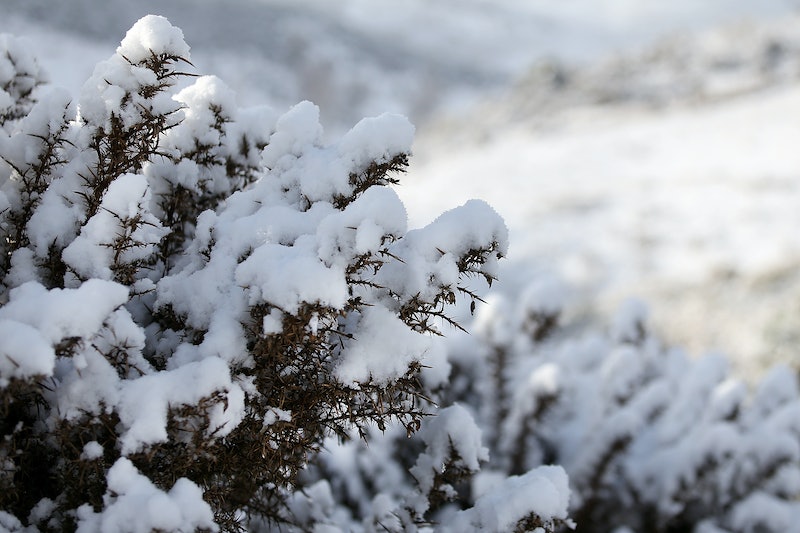 I love being an adult — I choose what to make for dinner, how to dress for school, and when to go to sleep; I read at the kitchen table in the mornings, blast the music for intermittent inter-species dance parties in the afternoon, and stay out as late as I like. Unfortunately, virtually every adult morning brings with it a blaring alarm, a blindingly hot shower, and a shockingly large cup of coffee, followed by a full day of work (and, because they don't put this in the brochure, let me be the first to warn you that working as a freelancer means weekends look almost identical to weekdays).

Sure, I can swing a sick day here or there, but gone are the days of feigning a fever to skip out on a test, and don't even get me started on summer vacation — at this point I'm virtually convinced the entire concept of three whole months off is nothing more than a collective hallucination. However, every now and then, when the stars align and the snow falls in thick, wet flakes we grownups do manage to score the rarest and most magical of all of reprieves: a snow day. So, when that day comes, don't waste your time shoveling the front steps or cleaning out your closet, do the smart thing and cuddle up with one of these 11 books for the perfect snow day.

When you've got an entire day to savor the spellbinding magic of a single epic novel you might as well go big with a mystery that stretches from the genteel pre-war apartments of the Upper East Side to the pulsing punk scene downtown. Garth Risk Hallberg's ode to life, love, truth, power, and rock n' roll in the city that never sleeps brings the bright New York City to life until a blackout plunges the world into darkness and the story abruptly changes course. With a wall of white blocking out the real world, there has never been a better time to immerse yourself in the electric realism of Hallberg's city and its eclectic cast of characters.

2. The Woman in White by Wilkie Collins

Winter calls for a certain kind of mystery to soothe the spirit and tempt the mind away from thoughts of work. Now is not the time for a flash-in-the-pan spy novel that rehashes the intricacies of the 21st century realpolitik; now is the time for dark and stormy nights, genteel detectives, and a healthy dose of high style. Now is the time for Wilkie Collins' The Woman in White — a classic mystery perfect for a cozy afternoon.

Mark Halperin brings magical realism to the wintery shores of New York City with this curious tale of a robbery gone wrong, a star-crossed love affair, and a mysterious white horse. Steeped in myth and stirred by the myriad of passions awoken on one stormy night, Winter's Tale is an perfect saga to savor on a snow day — captivating, otherworldly, and achingly beautiful.

4. The Shipping News by Annie Proulx

Some snow days call for magic and mystery, while others demand a story somewhat more true to life. For a deep and engaging read that draws you back down to earth even as the snow piles up in drifts, you cannot do better than Annie Proulx's The Shipping News. On the stark and frozen shores of Newfoundland, the cuckolded Quoyle slowly cobbles together a curious life in an offbeat town as straightforward as it is strange. Peculiar, pointed, and poetically profound,The Shipping News is literary fiction at its most powerful.

If you have not yet embarked upon the odyssey that is George R. R. Martin's A Song of Ice and Fire, you have not truly lived. Although you may have been planning a snowball fight, or loosening up for a little light tobogganing, I can promise you this — you cannot truly know winter until you've encountered a white walker or peered over the edge of the wall, so strip off those snow pants and prepare to head north with Game of Thrones.

Orhan Pamuk's Snow follows an exiled poet to the desolate city of Kars, blanketed by snow and beset by a mysterious wave of suicides among religious girls forbidden from donning the hijab. Pahmuk's poignantly off-kilter novel blends the existential with the ephemeral in a thoroughly engrossing story that pits religion against reason and delights in the aftermath.

When the sun is bouncing brightly off the blinding white banks encroaching on your cozy enclave, you are in the perfect position to go dark with a daring journey to Denmark in the dead of winter. Follow along as Smilla Jaspersen chisels away at the snow and ice all around her to uncover the truth behind a dastardly murder and bring to light all the lies the darkness works so desperately to hide.

On an isolated island at the far reaches of Puget Sound, racism, murder, and memory merge when a Japanese American is charged with the murder of a local fisherman. Swelling as slowly and softly as the snowbanks outside, Guterson's deft hand draws out a story of prejudice and passion both intimate and grand, a tremendous, haunting presence worthy of the blank canvas of a snow day.

9. The Luminaries by Eleanor Catton

Eleanor Catton's extraordinary epic opens –– as so many sagas do –– on a dark and stormy night, with a mysterious meeting of 12 strangers drawn together by a series of sinster and altogether unexpected events. Bridging the gap between fantasy, adventure, and high art, The Luminaries is quite simply the perfect snow day story.

10. The Winter People by Jennifer McMahon

Jennifer McMahon's The Winter People draws together a haunting past and a shadowy present rooted in the mysteries of a single farm house in West Hall, Vermont. Part historical fiction, part contemporary family drama, McMahon's chilling tale is the perfect way to infuse any snow day with a hint of the unknown.

On an unexpected day off from work why not give in to the joys of genre with Neal Stephenson's science fiction masterpiece Snow Crash. Transport yourself from your 21st century couch to the shadowy virtual world of an American future bathed in neon and decidedly digital. Follow Hero Protaognist as he makes deliveries for Uncle Enzo’s CosoNostra Pizza Inc. to earn a living, and then wades deep into the metaverse for a mythic battle between good and evil in the virtual realm.