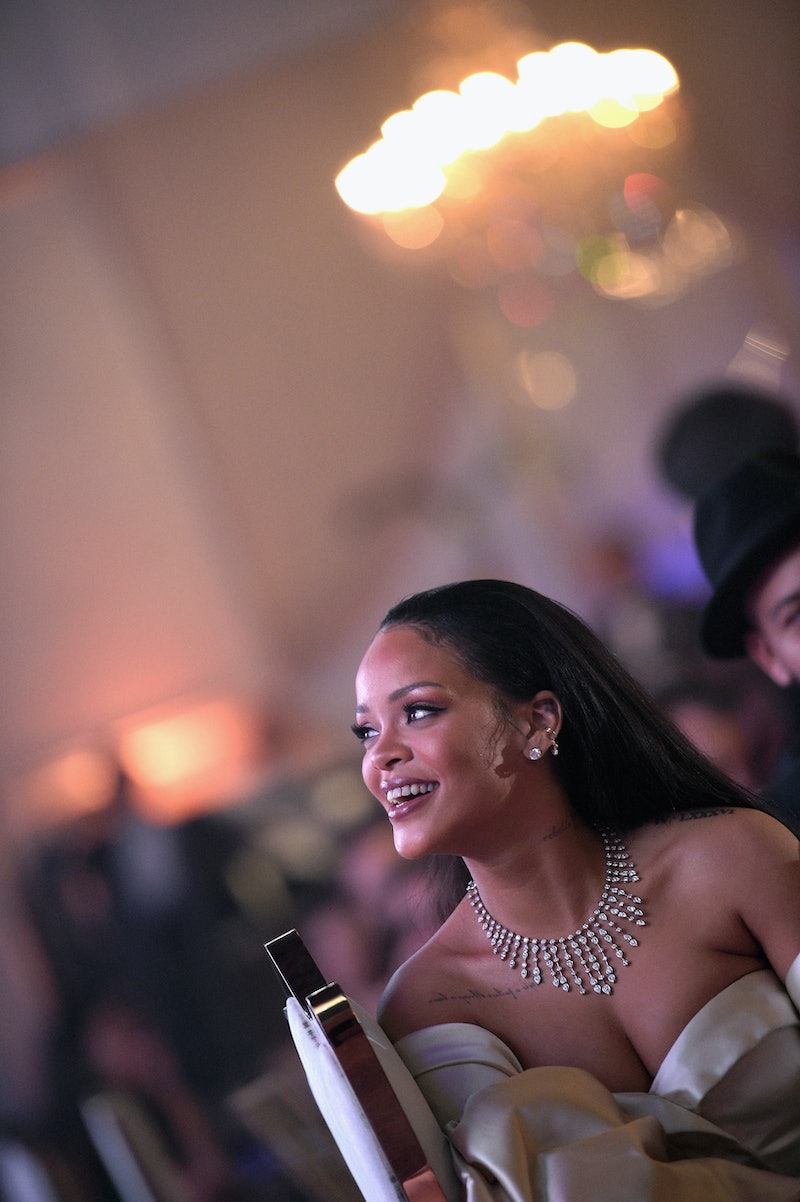 On Wednesday, a certain pop star (sort of) surprised us all when Rihanna dropped her long-awaited eighth album ANTI on Tidal. But it came as no surprise to me that, shortly after it was released, everyone was trying to figure out whether or not Rihanna was singing about her ex, Chris Brown. Or maybe Leonardo DiCaprio or Travis Scott or Drake. You know, anyone she's rumored to have dated since Brown. The topic of love is clearly on her mind, coming up often on the 13 tracks in many different forms. She's looking for it; she's missing it; she's confused by it; she may even be in it. But these notions of love don't seem pointed at anyone in particular. This is because ANTI is Rihanna's most personal album, and it's about her — nobody else. It's insulting to assume otherwise.

Rihanna definitely isn't detailing lost scarves and plaid shirt days that point to a particular suitor. Instead, this "you" she's singing about seems more generic, created just for these songs. This is new for Rihanna, whose entire catalogue of music is meant for dancing, not headphone listening. This album doesn't have any dance tracks that pump up the BPMs (though, there will surely be remixes in the near future). This isn't the RiRi you remember from her 2012 album, Unapologetic, which featured the Sia-penned hit "Diamonds." This isn't even the girl who gave you "B*tch Better Have My Money" nearly a year ago — a song that didn't make the ANTI tracklist. This is a quieter, more laidback, mature Rihanna.

She's made an actual album that doesn't rely on singles to carry it, but instead on this idea that you'll listen all the way through. And actively listen, paying attention to the words that she's singing, which focus on her finding herself. Yes, this time around, Rihanna has something to say. Plus, she doesn't waste any time saying it, kicking the album off with "Consideration," a song that has her proclaiming, "I got to do things my own way, darling." She talks about being disrespected, while also asking, "Darling, would you mind giving my reflection a break from the pain it’s feeling now?" But this isn't a plea; this sounds like someone whose made up her mind. It's time for her to move on, and she needs you to know that she's going to do just that, whether you like it or not.

And with that decision to try something new, she inadvertently says goodbye to the past, asking us all to consider who she is now, not who she once was. On her cover of Tame Impala's 2015 track "New Person, Same Old Mistakes" — renamed "Same Ol' Mistakes" for ANTI — Rihanna sings that she's a "brand new person," but that doesn't mean she's not making some of her old mistakes. In the same breath though, she sings "Stop thinking you're the only option." It's a kiss-off to those mistakes she made before, and, of course, it will be hard not to imagine that this is aimed directly at Brown. However, it waters down the message to assume that this song is for him — no, this song is for her, and any other woman who has been through an abusive or trying relationship. It's a personal anthem for the masses that makes it clear that it's not easy to forget the past, but you do need to come to terms with it.

Rihanna seems to have been on this enlightenment train way before ANTI dropped, choosing to speak about the night Brown assaulted her in a way that shows she's been reflecting on it. Rihanna's always had a tricky relationship with feminism, mostly in that many think she's bad for it. But, in these pre-ANTI interviews, she seemed ready to not only be seen, but to be heard, expressing her views on how women can rise up. Rihanna opened up to Vanity Fair about love and relationships, sounding older, wiser as she talked about women settling for the wrong man. "I will wait forever if I have to … but that’s OK. You have to be screwed over enough times to know," she said. "But now I’m hoping for more than these guys can actually give."

Rihanna told the New York Times that she was putting work before men. ‘‘Guys need attention,’’ she explained. ‘‘They need that nourishment, that little stroke of the ego that gets them by every now and then. I’ll give it to my family, I’ll give it to my work — but I will not give it to a man right now.’’ That ideal seems to ring true on the album, which has her on an emotional roller coaster that gets at the pain, the joy, the confusion that love can cause. But this honesty shows strength. Rihanna's not doing this for anyone else but herself.

There are a lot of things that have changed since Brown entered Rihanna's life, specifically that the pop star has come into her own and grown beyond her ties to him, personally and musically. We need to acknowledge that and move on — for her sake and ours.