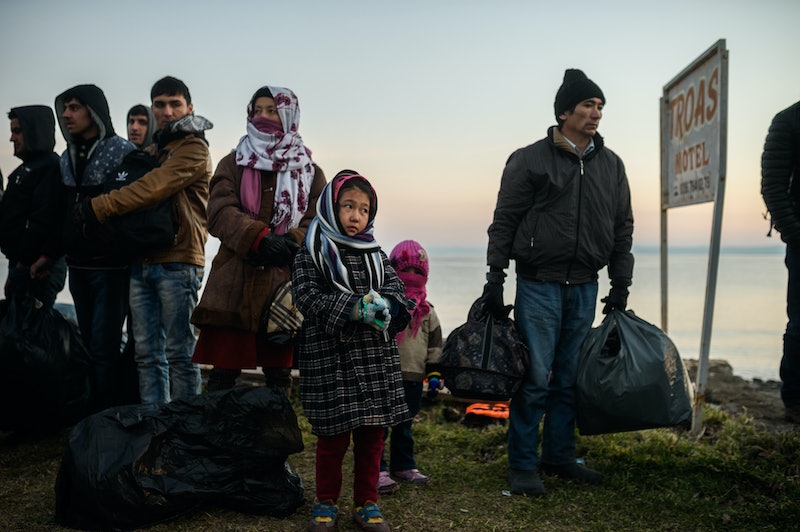 In the new year, the refugee crisis in Europe has continued nearly unabated. Plans that the EU would pay Turkey 3 billion euro to stem the tide came and went without an end to refugees, many from Syria, arriving on European shores in Greece. There may be no letup. A new U.N. report says as many as 1 million refugees could arrive at Europe's door. That's on top of the 1 million that arrived in 2015. And in some corners of the continent, the welcome mat is already wearing thin.

From new laws in Denmark to farfetched Dutch proposals, the plan to resettle refugees around the continent has not made much headway. Some 160,000 refugees were to be resettled from Italy and Greece — where most migrants arrive — to other EU nations. Only 900 have been resettled so far from Greece, while another 3,000 arrive each day. Instead of tackling the problem together, various countries have taken extraordinary steps that threaten further EU integration and cooperation.

The ISIS attacks in Paris and the sexual assaults and muggings of women in the German city of Cologne by huge groups of men that allegedly included some migrants has not helped with public opinion. The death of a Swedish refugee center worker — stabbed to death by a 15-year-old migrant — is the most recent shocking story that has hardened some against being more welcoming. The new proposals, laws and developments around the continent are troubling at best.

The Danish parliament has backed a controversial bill that would strip migrants of their valuables when they seek asylum from the Danish state. Any valuables worth more than about $1,500 would have to be turned over. They also have changed laws so that refugees will have to wait longer to be reunited with family members. U.N. chief Ban Ki-moon has criticized the plan and Amnesty International called it "mean spirited." The move has also been compared to the confiscation of valuables from Jews during World War II.

Under a new Dutch plan, refugees arriving on Greek shores would be turned back to Turkey immediately, delivered on ferries across the Aegean Sea. Only one EU country considers Turkey a "safe" country to return refugees. That would need to be changed bureaucratically for the plan to go through — and that would need to happen regardless of whether the situation in Turkey changes. In exchange under the plan, about 250,000 migrants in Turkey would be resettled in the EU.

Sweden has taken the largest number of refugees per capita since the start of the Syrian War when it promised permanent residency to Syrians who could reach Swedish soil. Now the system is being stretched thin. Sweden, followed quickly by Denmark, announced that it would close its previously open borders to stem the tide of migrants coming through Germany to the Nordic countries. Now the country's interior minister has announced it may deny as many as 80,000 asylum applications and will begin deporting them via charter aircraft.

In addition to working to resettle the largest total number of refugees of any European country after Chancellor Angela Merkel held open the door, Germany has also been facing Russian propaganda attacks. Russian state television aired a story claiming that a 13-year-old girl in Germany with Russian roots had been kidnapped by immigrants and then raped. Deutsche Welle, the German state broadcaster, has found the reports to be untrue and police have denied any such situation.

Greece Cut Off From Europe

New EU proposals suggested to save the Schengen Zone, the border-free travel area on the continent, have included kicking out Greece. Discussed by the European Commission Monday, the plans would strand migrants in Greece, and officials called on the country to build camps for up to 300,000 people. Officials blamed Greece for not being able to control its sea border, where many migrants arrive from Turkey. Greece's public order minister said the country should not be blamed. “It is very difficult to stop small boats coming … except sinking or shooting them, which is against our European values and Greek values and we will not do that."