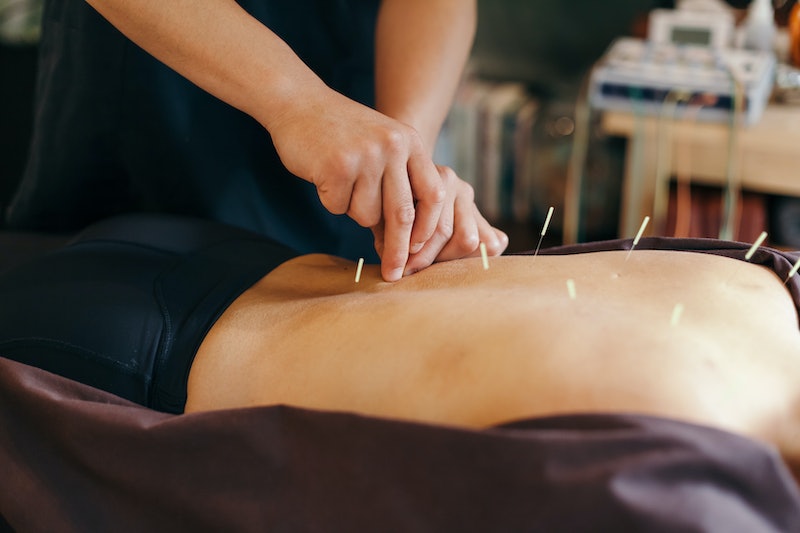 After devoting myself to acupuncture for three straight months, it's safe to say I'm an enthusiast — and that's coming from a cynical woman who once thought holistic treatments were a total sham. Even I couldn't deny that acupuncture was the only thing that simultaneously eased my back pain, my anxiety, and my irregular periods. I'm a convert.

Once only viewed as a hippie form of healing, acupuncture is being taken seriously these days, and it's even included in some health insurance plans. The list of benefits of acupuncture is so long and diverse that you have nothing to lose (besides maybe some money) by trying it out. It treats you from head to toe — physically, emotionally, and mentally, by strengthening the mind-body connection that is so often ignored in today's age. You might even find that you've found a new kind of Zen after being needled.

Talk to your doctor before making any big decisions, as always. They'll be able to tell you more about how acupuncture relates to any medication you're on (even though it's not likely that it will interfere), as well as give you a good idea of what to expect. Once you've knocked that chat out of the way, there's very little stopping you from scheduling your first appointment.

Here are eight signs that acupuncture might be the perfect holistic treatment for you.

1. You Have Chronic Neck & Back Pain

Back problems are the number one reason people seek out acupuncture, and for good reason. It's an especially good choice for you if you've tried a lot of other alternatives — massage, yoga, physical therapy — and none have worked in a lasting way. The American Pain Society and American College of Physicians actually recommends that doctors send their patients with chronic lower back pain to an acupuncturist, particularly if conventional treatments haven't been working.

Before you get started, though, remember that acupuncture only works once you've proved your loyalty. You can't expect to just go once and permanently feel better (although, you do feel pretty incredible after your first session). Give it at least a few weeks before you decide whether it's truly helping you.

2. You Have Irregular Periods But Don't Want To Change Birth Control Methods

There's no denying that acupuncture has some sort of positive influence on your menstrual cycle. At the very least, it relieves stress and gives you the energy to feel great. This kind of positive boost definitely contributes to a healthier cycle, which is why it's often used as part of fertility treatment as well.

Personally, my experiences with acupuncture have been amazing when it comes to regulating periods. It always helps kickstart a period that is a bit too shy to show up, and it assists me in staying regular in general.

Even if you've got a fantastic therapist and you've tried a few different medications, there comes a time when you feel like you could an extra bit of help to ease the anxious feelings that plague you. Acupuncture can start to relieve your anxiety within the first few weeks of treatments, and there are no side effects that will make you doubt whether it's worth the trouble.

Daniel Hsu, a Doctor of Acupuncture and Oriental Medicine in New York, says the body's overall system becomes more balanced from acupuncture, and that includes your stress. It's a treatment that significantly reduces anxiety, without interfering with the other ways you've chosen to take care of yourself.

4. You Have Inexplicable Mood Swings

When compared to counseling sessions, one study showed that getting acupuncture weekly for three months treats depression more effectively. If you feel like your moods are all over the place, consider finding an acupuncturist in your area. The needles trigger the neurotransmitters in your brain that make you happy, without the nasty side effects that often come with prescription medication.

Acupuncture addresses the imbalances in your body that throw off your proper sleep cycle. The gentle needling encourages your brain to produce more of the neurotransmitters that contribute to relaxation and sleep. People with insomnia report that their sleep cycles become more balanced the more they get treated.

If you haven't had a good night's sleep in a while, there might even be some stuff going on in your body that medication can't treat, but a solid holistic treatment can explore the possible causes and get to the heart of the matter.

5. You Want To Ward Off Seasonal Allergies Without Medication

Patients who suffer from allergies every year have reported less sneezing and runny nose throughout the day when they took to acupuncture, and they were able to stop taking antihistamines. Some have even found relief in these treatments who didn't respond at all to medication or shots. Acupuncture can treat symptoms of allergies, as well as prevent them from visiting you in the first place.

It's done by treating the meridians in the body that are around the spleen, stomach, and large intestine. Apparently, these are the parts of the body that release lymphocytes, which react strongly with pollen and make your eyes itch like crazy.

6. You Want To Prevent Injury & Illness

Prevention isn't sung as acupuncture's most popular benefit, but it's certainly one of its strongest. We don't have to wait to feel rundown or sore before we do something about it. It's like getting a flu shot — you opt in so you don't fall sick later.

Eight out of every 10 people will report lower back pain at some point, so even if you haven't experienced any yet, there's a chance you'll struggle with it in the future. Acupuncture also boosts your immune system and helps it ward off infections, which prevents you from catching unwanted illnesses.

7. You Have An Old Injury That Still Causes You Pain

Injuries from years ago can come back to haunt you when you least expect it. For example, I busted my knee when I was sixteen from a pretty hard stumble on the tennis court. After it initially healed, I thought I wouldn't have to worry about it ever again — until it started aching nearly eight years later.

This is pretty common among old injuries (sometimes scarily referred to as mini-traumas), but, fortunately, acupuncture is brilliant for treating those years-old damages. The needles relax the tissue around the muscles and allow the collagen to build up again, which also prevents that pain from creeping in out of nowhere.

8. You Get Migraines Often

They're said to be incurable monsters, but a study by the Canadian Medical Association Journal says acupuncture reduces the frequency of migraines in people who suffer from them, and the effects are long-lasting. Albrecht Molsberger, a specialist who worked on the study, said this study made it clear that acupuncture should be used as a primary treatment for individuals wrestling with migraines.

There's nothing to lose by giving acupuncture a shot. At the very least, you'll go home relaxed and ready for a much-needed nap. Sometimes there's nothing better in the world than that.

More like this
How Many Burpees Should You Do Per Day? Here’s What Fitness Trainers Say
By Carolyn Steber
Kourtney Kardashian’s Wellness Guru Shares Her #1 Tip For Better Health
By Taylor Jean Stephan
Here’s Where The NHS Nurses’ Strike Currently Stands
By Sophie McEvoy
10 Primal Movement Exercises That'll Improve Your Mobility
By Carolyn Steber
Get Even More From Bustle — Sign Up For The Newsletter
From hair trends to relationship advice, our daily newsletter has everything you need to sound like a person who’s on TikTok, even if you aren’t.