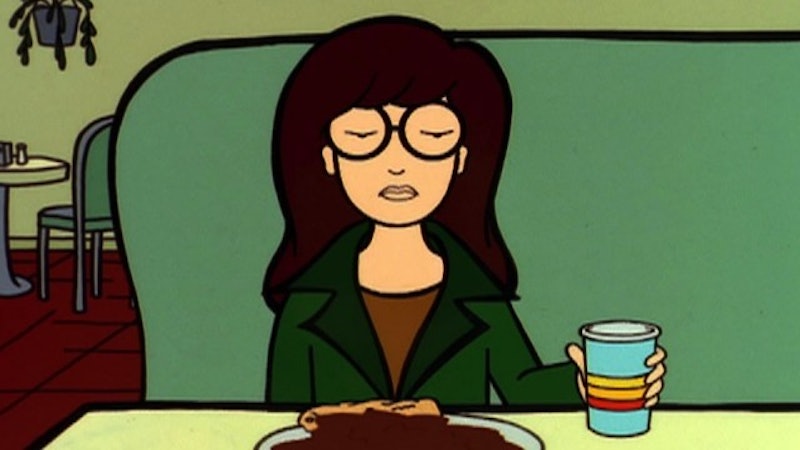 Long before the days of shows like Awkward, Teen Mom, and Teen Wolf, MTV was full of shows focused around music, dating, and just straight-up teenage entertainment. From the undeniable teen angst that was Daria to looking forward to watching your favorite artists premiere their latest music videos on TRL, MTV was the thing to watch for the late teenagers and college students of the '90s and '00s. Each show had a balance of both stars and everyday people and, not going to lie, the fashion and hair trends of those days made everything so much more entertaining. However, while these shows would definitely be different if they were to premiere today, that doesn't make them any less worthy of a reboot. In fact, these MTV shows of the '90s and '00s need to be brought back immediately.

Why? Because aside from some scripted shows and MTV's annual Spring Break tradition, MTV of the '90s and '00s still grasped on to pieces of it's original intention: Music Television. There were time slots of music videos, game and talk shows that featured your favorite musical guests, and when there was a scripted or reality series, it was still generally geared towards that same older audience. Honestly, I highly doubt that the shows young teens of today watch on MTV would ever air in the '90s. Here's just some of the shows from the '90s and '00s that made MTV so great.

Daria was basically one of the most relatable characters on television. With her bitter, cynical point of view of everything and everyone, she would basically win the Internet if she had her own Twitter account. Therefore, a modern day Daria reboot would probably be an amazing idea.

Before the days of American Idol and Lip Sync Battle, it was up to random teens and young adults to take the stage and belt their hearts out on live television. With the '90s classics of the times and celebrity judges, this show was everything. But, if they ever bring this show back, they should still stick to the '90s and '00s classics only. Nostalgia runs deep.

What you may know as title of a certain series of popular comedy movies actually all started on MTV. There was no crazy stunt that these guys wouldn't try, and that's really what made it all so appealing.

While Nickelodeon had kids sketch comedy shows such as The Amanda Show and Kenan and Kel, older audiences had the comedy sketch show The Tom Green Show on MTV. And the antics were nothing less than ridiculous.

Who didn't secretly wish they could be on Pimp My Ride?! Although the show has been undergoing recent scrutiny for how legit the show was — or wasn't — that doesn't stop how fun it was to watch a broken down car end up with a hot tub in the backseat.

Yes, there was a time when this Simpson girl had her own reality television show, and it followed her budding music career! While it would be hard to reboot the show today, I say that if Simpson ever wants to revive her music career, then this is the way she should go about it.

Want to see your favorite stars battle it out? Well, that's exactly what this show did! Sort of. Clay, puppet-like versions of our favorite stars would hit the wrestling right and fight it out. Looking back at it, it does sounds pretty random and unnecessary. But, that doesn't make it any less entertaining, which is probably why MTV2 is bringing it back... eventually.

When you think about it, this show was actually pretty groundbreaking at the time. The scripted series explored teenagers and college students in all kinds of different sexual relationships. It was definitely unlike most of what was on TV, that's for sure.

This show not only launched the careers of modern day reality stars — such as Kristin Cavallari and Lauren Conrad — but it also was a key part of the birth of reality television. It later launched the spin-off show The Hills, and its success resulted in more MTV reality TV series, such as Jersey Shore in 2009.

Long before the days of Tinder, this show was the '90s dating scene at its finest. The popular game show was hosted by Jenny McCarthy, and it was basically embarrassing blind dates put on live television.

If you're like me, you would agree that this was the single most important MTV show to ever air. Before the days of YouTube and iTunes, top artists would go on TRL to release their new music videos. And if a music video was voted no. 1 by fans for weeks at a time, that was pretty much a huge deal. Remember when MTV was actually about music?

I've said it before and I'll say it again, the '90s and '00s were really a high point for television. Let's bring all these shows back, MTV. You at least still have an audience in me.