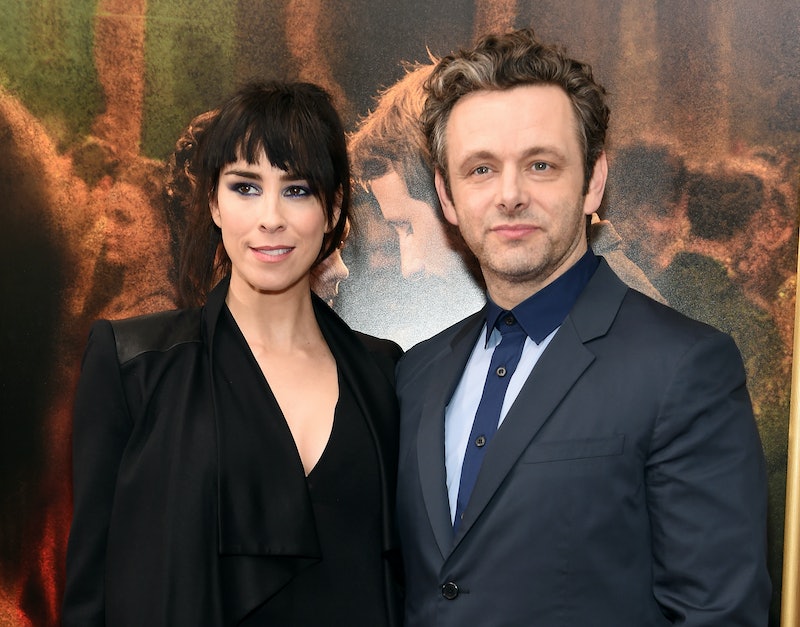 When I started watching Masters of Sex, I began developing a strange crush on the show's star, Michael Sheen, an actor who I'd never really noticed before. He was an intelligent, older man, and maybe the line between he and his character, Bill Masters, was getting blurred for me, but I became interested in who he was dating in real life. Turns out, Sheen is currently dating Sarah Silverman, his Masters of Sex co-star. They have been together for almost two years now, and although they might seem like an unexpected couple, they have had some sweet words to say about each other throughout their relationship that show just how much they care for one another.

What I love is that Silverman is always herself when talking about her boo, meaning she often shares funny anecdotes and genuine surprise that she snagged Sheen, which is adorable. But she's a funny, beautiful, talented, and all around awesome woman — of course she did!

Here are some of the funniest and sweetest quotes Silverman has shared about Sheen, and vice versa, because love is great and they make that very clear.

1. When We Found Out Her Favorite Part of Sheen's Body

Silverman went on The View and discussed a photo of her grabbing Sheen's booty on the red carpet at the 2014 Met Gala. She said, "What am I supposed to say, I'm an ass man... Look, this is so awkward. Listen, I love his body, but I also love what's on the inside."

2. When She Couldn't Stop Gushing

Silverman appeared on Inside The Actors Studio and when discussing her role on Masters of Sex, described Sheen's character, saying, "Bill Masters is played by the sexy, gorgeous, astoundingly brilliant — I'm just stalling because I can't remember his name — Michael Sheen, who is also my real-life lover." Classic Silverman, but also oh so sweet.

3. When He Didn't Joke About Their Relationship

While Silverman often resorts to her jokes to give an insight on their relationship, Sheen was no frills when asked about her on E! News. He said, "She's a wonderful, wonderful person. She's funny, obviously, but she's so smart and so sensitive and thoughtful and kind." Very cute.

4. When She Proved Opposites Really Do Attract

Silverman was on T he Ellen DeGeneres Show when she was asked about her boyfriend, and told DeGeneres, in the most hilarious way,

5. When She Wasn't Shy About Loving His Smell

Sometimes love makes you do and like crazy things, like loving your partners stinky musk, which would usually make someone gag. Silverman opened up to Jimmy Fallon and said of Sheen, "I love his smells... One time he burped in the kitchen... and I was like 'I want to know all your smells. I love you!' The smell of his armpits make me crazy." That's... nice?

6. When He Knew She Could Be Misunderstood

For a chat with HuffPost Live, Sheen admitted that their relationship might be a surprise to many people but they make sense in the important ways:

She's amazing. She's a wonderful person. She's funny, obviously, she's an incredible, sensitive, beautiful person. It's very easy to misinterpret her a lot of the time. She's got an extraordinary brave heart to her and she's incredibly inspiring and she's had a big effect on me in all kinds of ways and I think she's just marvelous.

7. When She Knew She Was In Love

Nothing like showing up on your ex-boyfriend's show to talk about your current boo, right? Silverman opened up to Jimmy Kimmel about Sheen and said, "I'm so happy to have him be a part of my life and to get to be a part of his life. I don't think I ever really knew what love was... I don't think I've ever really been in love before, I realized. You know what I mean? And you guys have so much common! He starred in Frost/Nixon and you were the fat guy on Win Ben Stein's Money." Well, they must be on really good terms to be that honest!

I love how honest and real these two are about their relationship. It seems like opposites truly do have a chance to be happily in love!