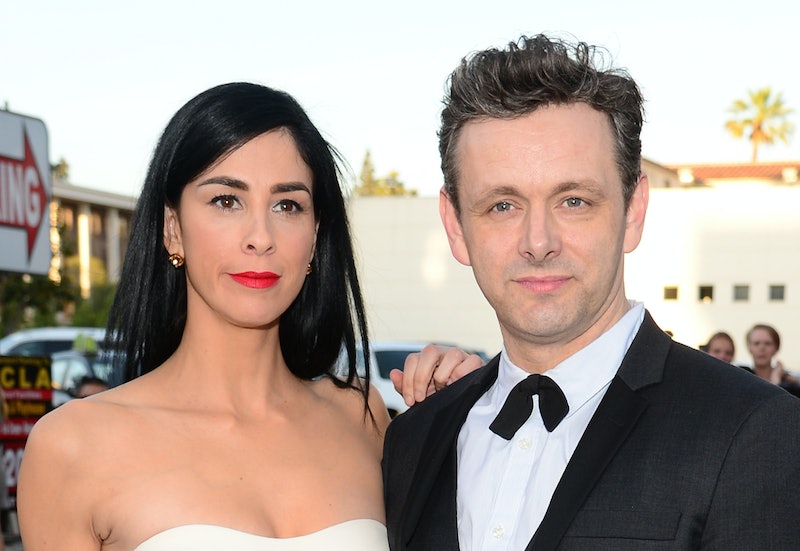 Master of sex and master of playing Tony Blair, actor Michael Sheen, has had some fantastic girlfriends (including his present day GF, Sarah Silverman). The 45-year-old Welshman seems to be attracted to a diverse group of talented ladies — and they're attracted right back. If you don't think of "sexy" when you think of "Welshman," you're clearly forgetting about Sir Tom Jones who gets panties thrown onstage to him on the regular. Since Masters of Sex returns for its second season tonight, I can't help but pry into Sheen's own romantic life.

Sheen has been notable in his work on the British stage and in Oscar favorites (The Queen, Frost/Nixon) and then some, uh, how should we say, not so Oscar-friendly films (The Twilight Saga, Underworld). But he's also down for fun and amazingly bizarre acting roles as well (30 Rock, The Spoils of Babylon ). He stars in the critically acclaimed (but sadly, not acclaimed enough to get nominated for a Best Drama Emmy this year) Masters of Sex as the brilliant and controlling Dr. Bill Masters.

Along with his well-rounded acting resume, Sheen was the captain of the Rest of the World soccer team in this year's Soccer Aid game (his third time as captain). A talented footballer (as a child, he turned down the opportunity to join Arsenal's youth team), he led his team to a victory over the England team of celebrities and soccer legends, all while raising money for UNICEF.

With his acting talent, intriguing role choices, and generous extracurricular activities (not to mention his adorable face), it's no wonder that the following women chose to be romantically linked to him.

Look at what babies they were! British beauty Kate Beckinsale and Sheen were together from 1995 to 2003 and they have one child together. They met while acting in the play The Seagull and began dating. Their daughter, Lily, was born in 1999 and in 2001, Beckinsale starred in Pearl Harbor.

The couple starred together in Underworld in 2002, where Beckinsale met director Len Wiseman. Sheen and Beckinsale moved from London to Los Angeles in 2003 and subsequently broke up. Beckinsale started dating Wiseman shortly after and they married in 2004 and are still together. (She says she never cheated on Sheen.)

Beckinsale and Sheen are still friends to this day and she only has some really genuinely nice things to say about her ex. Which is what should happen when you were together for so long and have a child together, but it's not always the case. Sheen even celebrated with them for Wiseman's birthday this year.

After his breakup with Beckinsale, Sheen entered another long-term partnership, this time with British ballet dancer Lorraine Stewart. The pair were together from 2004 to 2010.

Although she's not as famous as some of Sheen's loves, she's still talented and beautiful (I'm detecting a theme). And she was a featured dancer in the movies The Phantom of the Opera, Beyond the Sea, and Nine. You can also take a Bikram yoga class with her as your teacher, if you're into that sort of thing.

Look at how flipping amazing they look together! Rachel McAdams is the hippest lady around. She’s shown a range of characters and hair colors throughout the years — and she always pulls them off. From Mean Girls to The Lucky Ones, and Wedding Crashers to Midnight in Paris, this Canadian has an impressive list of films — and exes — herself (exes include Josh Lucas and Ryan Gosling).

The pair met on the set of Midnight in Paris, but did not start dating until after filming was over. They dated from 2011 to March 2013, but sadly, they called it off due to "different visions for the future." McAdams wants to get married and have children one day, which was not in Sheen's plans.

Caitlin FitzGerald is best known for being Sheen's costar on Masters of Sex. She plays Libby Masters — Sheen's character's wife — and they have a complicated relationship to say the least. So, did the pair decide to complicate their relationship offscreen as well?

It actually pains me to bring FitzGerald into the mix since their romantic relationship is based on rumors, but the gossip is there, so I won't avoid it. Back in August 2013, they spent a day together and there was a photo of them kissing. But it seems that rumors are really all it was. That kiss looked platonic and Sheen's rep told MailOnline that they are "just friends." I believe it.

Back in May 2011, Sheen went on the Carrie Keagan-hosted VH1 show Big Morning Buzz Live. While on the show, Sheen showed what an amazing sport he is by doing a dramatic reading of some Twilight fan fiction. (Alas! The video of this is nowhere to be found.) Now, that alone is enough to make us want to date a guy, but it wasn't until October 2013 that Keagan and Sheen rumored to be dating.

The odd couple only dated for a few months (which is evident by the lack of photos of them together) because by February 2014 he was already linked to ...

Sheen's girlfriend is the hilarious comedian Sarah Silverman. Silverman and Sheen may seem like another somewhat strange pairing, but Silverman has joined the cast of Masters of Sex this season as Helen — Betty's former partner. Sparks must have flown on set for the duo since they have now been dating for five months.

While promoting A Million Ways to Die in the West, Silverman went on The View and discussed grabbing Sheen's ass at a red carpet and garbled an awkward "I love the guy" after being asked if she was in love or lust with him.

As sad as I was to see Sheen and McAdams split, the pairing of Sheen and Silverman is pretty spectacular. If they both are in agreement with what they want out of a relationship — since Sheen doesn't appear to be interested in marriage — they could have a fun, masterfully sexy time.