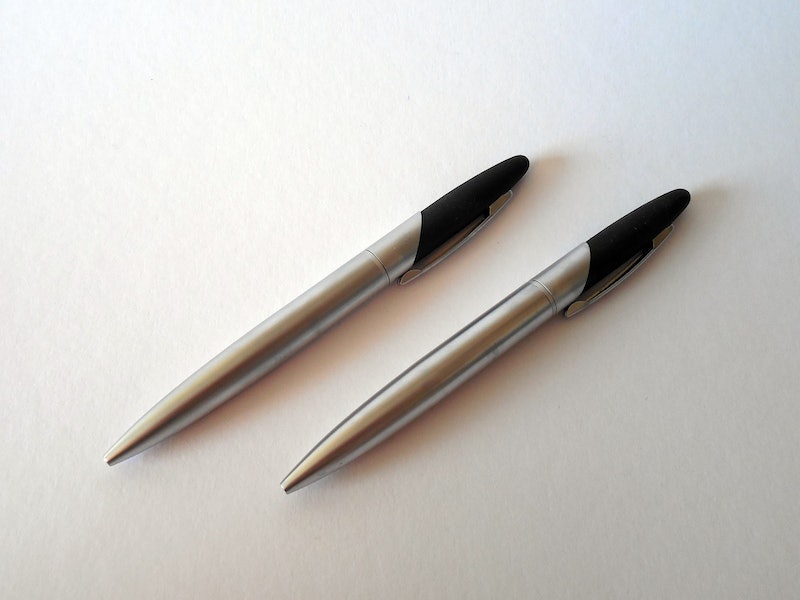 Some of our greatest innovations, technological advances and fashion trends originated in China and Japan. Now, they brings us a different kind of jaw dropping trend: the underboob pen challenge. The cool kids in China and Japan are sticking pens under their boobs and want you to stick pens under your boobs, too. Yes, this is a real thing that's happening right now. In what seems to have resulted from an old wives tale and a very messy game of telephone and misinformed translations, young women are taking photos of themselves with pens wedged in their underboob and posting it to social media with #underboobpenchallenge.

WTF, you say? WHY you ask? Well, in the 1970s when the concept of going bra-less was a hot topic and victim of debate, one woman publicly suggested that if a woman can place a pencil under her breast and the breast is large enough to hold it there, it's large enough to require some boobie-baskets. Reversely meaning that if your pencil fell to the floor you were free to burn your bra. This woman didn't have her PhD in boob, she was not a political authority, she was just referencing and old wives tale, and unbeknownst to her, she was influencing many generations ahead of her.

Somehow, this notion turned into a fun picture game for young women to show off their failing of the "do you need to wear a bra" test. But as with anything on the internet, what starts as one thing, has a surefire chance of turning into something else completely. One thing us Americans do know about Japan, is that they are the kings of wacky TV programming. From whatever clips have gone viral and made their way to our screens, we know that they're outrageously creative, brave and shameless. Their sense of humor is wide and clever. Which is exactly why the underboob pen challenge has expanded to the stomach roll, double chin, and dimple challenge, inviting men and women with ungripable underboobs to participate in the fun.

If you take a step back from the ridiculousness of the photos, the challenge itself is actually rewriting something that had negative connotations to be body-positive and contemporary. Because women today aren't going to let anyone tell them what to do with their boobies, especially not a pen or pencil.

I know, I know, you're all "why is she talking about fun pictures of boobs and now showing them?!" For your modern mind and viewing pleasure, I present you the Underboob Pen Challenge of 2016:

Just when you think the internet is the weirdest place in the world, it just gets weirder. But so long as it's spreading light hearted, body-positive fun, it all good.