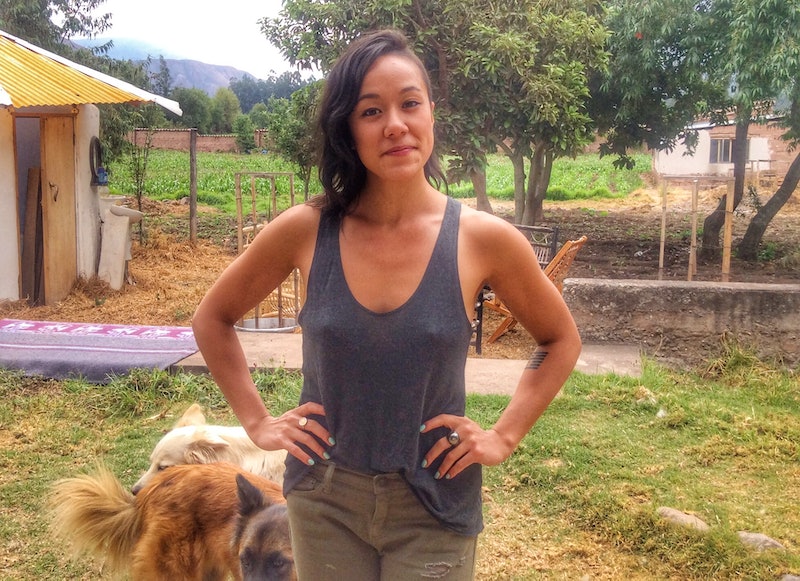 I was 12 when I obediently strapped myself into my first training bra. It had a Winnie the Pooh logo in the middle, right in front of my sternum, and one classmate mercilessly teased me when the sunlight shone through my beige T-shirt to reveal Winnie's red shirt. I went straight to the bathroom and cried in the handicap stall. So far, my introduction to the bra life wasn't going so great.

Combine that with my mom informing me that my boobs would sag by the time I hit 30 if I abstained from wearing underwire bras, and my tween self already felt like it was time to catch up. But as soon as I strapped on that first beige undergarment, a hatred began to fester within me. The pinching underwire, the itchy tags, and the impossible-to-clasp plastic hooks — I wondered how any human being could allow themselves to be so burdened for the rest of their life. But I wore the thing anyway, day in and day out, to school and to dance class, internally griping and moaning all the while.

Before we go on, I should probably mention (if you haven’t figured it out already) that I have small breasts — something I used to really, truly hate about myself. Bras quickly became a daily reminder of my lack of boobage, and I couldn’t bring myself to view them as anything other than a method of self-torture. This feeling stayed with me from high school all the way to my years as a graduate student in Boston. I looked forward to the weekends, when I could lounge around bra-free and worry-free in private.

Everything changed when I moved to Australia in 2013. The beach life down under was different from New England, to say the least, and I ditched my oversized sweaters and leggings for tank tops (or as they call them, singlets) and lacy cover-ups. Being in and out of the salt water every day, basking in the eternal sunshine, and witnessing the countless Australian beauties whose breasts lived unrestrained allowed me to renegotiate my relationship with bras.

Little by little, I broke it off with brassieres. And now here I am, a content, braless woman. Here are the reasons I will never wear a bra again.

1. They're Not Actually "Better" For Your Breast Health

Where is the rulebook saying that women have to wear bras in order to be healthy, happy, gorgeous beings? I don’t remember hearing about it during my first OBGYN appointment. Yet we seem to all believe it.

In actuality, recent scientific research tells us that there's no evidence to suggest any medical or physiological reason we should don a bra every morning. A 15-year study on 330 women between 18 and 35 years of age was conducted at the Centre Hospitalier Universitaire in Bensancon, France, and the individuals who gave up bras actually gained a 0.3 inch lift in their nipples compared to the ones who continued to wear them.

In other words, contrary to popular belief, giving up bras is good for our breasts. Sport science researcher Jean-Denis Rouillon, who led the French study, said we can actually gain "more tone and supporting breast tissue" by letting gravity do its natural work on us. Bras run the risk of cutting off much-needed circulation, resulting in premature sagging. If we let our breasts be free, we boost collagen production and elasticity.

2. It’s Impossible To Find One That Fits Perfectly

All those perfect hourglass shapes that flail around in lingerie commercials look nothing like me, so you can imagine how the pink padded things they’re wearing simply don’t fit my body. I’m 5’2, I have broad shoulders and a wide ribcage, yet I barely fit into an A-cup.

That means, whether it's a 34A or 32A, the elastic band pinches too tightly, while the edges of the cups don't sit on my boobs, leaving this weird gap that is far from flattering. No matter how much I fiddle with those adjustable straps, I can't get them to rest correctly on my shoulders without compromising the fit of the cups.

I buried my bras in an old suitcase under my bed for the same reason I dumped my tampons to shack up with a menstrual cup — they’re uncomfortable as hell, and I don’t have the time to deal with the inconvenience. I know not all women share my sentiment, but I'm no longer interested in seeing the red indentations that show up under the straps after a stressful day.

The funny thing is, I never found bras that intolerable until after I kissed them goodbye. It didn't take long for my rib cage and upper back to tell me that they had been cooped up for far too long. I noticed a real difference in how my body felt — and as a yoga teacher, I don't say that lightly.

I trust you’ve learned by now that being a woman isn’t a cheap endeavor. Before we leave this earth, we’ll spend over $18,000 on feminine hygiene products — tampons, panty liners, pain relievers, etc. We pay more for haircuts, razors, and deodorant than men do. The most frustrating part? This gender price discrimination isn't monitored whatsoever by the federal government.

We're spending enough money as it is. If I can help it, I don't want to concern myself with the stress of rummaging through the varying prices of brassieres. Should I spend $12 on a basic bra, or $200 on a designer model? Let's say I take the middle ground, and spend $30-$40 on a decent undergarment. I'm told that I need around 10 different styles in my closet to suit different weather patterns, outfits, and moods. That means I have to dish out up to $400 in one sitting — until I've worn out the elastic on them and am forced to buy a whole new round after the recommended six months.

Um, no thanks. If I don't need to spend the extra money on something that makes me uncomfortable, I won't be pulling out my wallet in the brassiere section of a department store any time soon.

5. We Deserve To Have A Choice

Haven’t tried it yet? No matter your cup size, I recommend you give your boobs a break! Embrace the sweet jiggles and shakes. Enjoy the lack of underwire and annoying tags. Afterwards — and this is the most important part — figure out which version of breastdom you like best. You deserve the option.

I'm making no claim that every single woman out there should burn her drawer of bras. The point is comfort, after all. If you find it more comfortable, then by all means, wear a bra! I just find it frustrating that we've never really been given the option. We've been raised to think it's a mandatory part of being a woman, when in reality, it's just another societal norm. The impossible standard of beauty, in this case, is all about enhancing and modifying the shape of our breasts to be "optimal" or "more appropriate."

6. Not Wearing One Has Made Me More Body Positive

The world isn't always kind to small-breasted women. Take a look at any perfume advertisement, magazine cover, or tampon commercial, and tell me what you see. Nine times out of 10, it's an impossibly thin woman with voluptuous, perfectly round breasts, and flawless cleavage. Left and right, we're told that to be well-endowed is to be beautiful, and the sad thing is that all these images have been ridiculously enhanced by somebody sitting behind a computer.

Then there are the microaggressions that break our hearts. On one of the rare occasions I waltzed around my apartment sans bra, an ex-boyfriend of mine demanded that I put one back on because my "pointy" breasts resembled "tiny Bugles" when they weren't properly strapped in. Not surprisingly, after years of hearing comments similar to this one, I had the unhealthy notion in my head that I had to alter the (supposedly unattractive) shape of my breasts in order for them to be out and about in public.

Well, I think I can confidently say that I've left that self-loathing part of my life behind, along with the string of jerk boyfriends. So what if my boobs look different than what Jennifer Lawrence has been blessed with? I finally dig them. And it feels really good.

More like this
10 Stylish Plus-Size Boots That Will Fit Wide Feet & Calves
By Dominique Norman
Wimbledon Alters All-White Kit Rule Amid Candid Period Discussions
By Catharina Cheung and Rachel Mantock
Here Are All 703 Outfits Rachel Wore On Friends
By Kat George
The Best Heels For Bunions, According To A Podiatrist
By Margeaux Baulch Klein and Maria Cassano
Get Even More From Bustle — Sign Up For The Newsletter