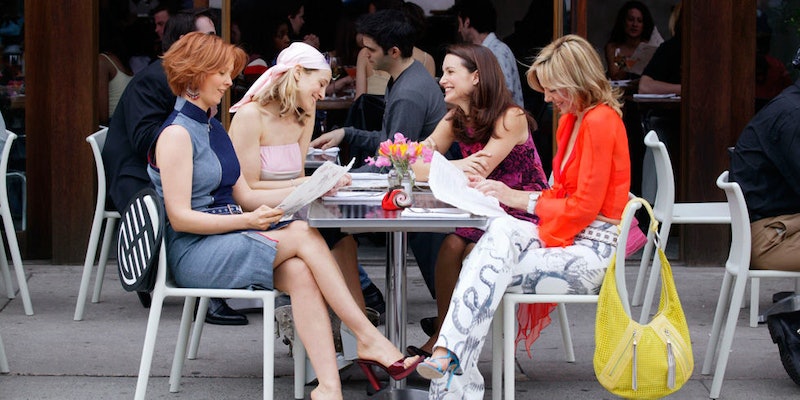 It's no secret that HBO's long-running series, Sex and the City — which examined the lives of four very different (but very close) Manhattan women between 1998 and 2004 — has been lauded by fans as a refreshingly honest female take on sex, love, and life. And, sure enough, Sex and the City included a lot of feminist moments that were not only inspiring for women, but also totally revolutionary for the time that the series was airing o television. The series may have had a few outdated quotes about sex, relationships, and feminism (I mean, no show is perfect), but that shouldn't take away from the fact that it always supplied women with the voice they deserved — not to mention the one they so rarely got to have — on television.

Without Sex and the City, shows like Girls may never have existed — and a lot of frank discussion about sex by female characters on television may never have taken place. The series started a revolution or sorts in this sense, and there were key moments in the show that did this more than others. Here are some of the best:

1. When Carrie Tells Aidan She Isn't Ready For Marriage

Even some diehard Carrie fangirls question her judgment when she lets Aidan go — he was hot, kind, and great with his hands — but, unfortunately, just because Aidan was a catch doesn't mean he and Carrie wanted the same things. Carrie told Aidan that she needed a lot of time before getting hitched, but when he started pressuring her to walk down the aisle earlier, she put her foot down — she knew she wasn't ready, and wasn't going to let a man bully her into doing something that didn't feel right. No matter how much Carrie adored Aidan, her autonomy was more important.

2. When Miranda Makes A Choice About Her Pregnancy

When Miranda finds herself pregnant with her ex-boyfriend's baby, she grapples with the different options, even making an appointment to have an abortion before deciding not to go through with it. In the same episode, it is revealed that both Samantha and Carrie have had abortions in the past, showing that, though Miranda goes through with the pregnancy and has a baby, every woman is entitled to their own choice.

3. When Charlotte Leaves Trey So She Can Pursue Motherhood

Charlotte thought she found the perfect man when she met Upper East Side doctor Trey — but she ultimately found that their views didn't align. When Trey decided that he didn't want to try for a baby or pursue adoption, Charlotte told him that she couldn't be with someone who wouldn't consider having a family with her. Charlotte's choice to be a mother may seem more "traditional," but making the decision for herself was just as much of a feminist act as any woman choosing to carve her own path.

4. When Carrie Stood Up For Her Spending Habits

Sorry to burst your bubble, aspiring sex columnists, but you likely won't be able to drop tens of thousands of dollars on shoes from a weekly newspaper column alone. That being said, Carrie is a grown-ass woman and can spend whatever money she has in whatever way she wants — even though there were certain people in her life who were ready to shame her for it. When Carrie's very expensive, designer shoes (Manolo Blahniks!) were stolen at a party and she asked the hostess to replace them for their full cost, the hostess scoffed at what she believed to be the frivolous expense of a single woman. Instead of letting herself be shamed, though, Carrie spoke up and reminded her judge-y friend that she has the right to handle her finances in any way she sees fit — and, yes, that includes widening her shoe budget.

5. When Miranda Proposes To Steve

Miranda and Steve were the ultimate on-again/off-again couple, but ultimately it was Miranda who decided that she wanted to be "on" forever. Miranda's proposal to Steve was an awesome gender role reversal, and it reminded audiences that they don't have to wait around for a man to show up with a ring if they want to get married.

6. When Samantha Feels No Shame About Her "Neck Massager"

Samantha is rightfully touted as a feminist because of her sexually free nature, and there are dozens of scenes that I could list here that illustrate her refusal to conform to the sexist standards that say women aren't, or "shouldn't be," as sexual as men. However, one of my favorite feminist scenes is when Samantha walks into a store and demands a refund on her "neck massager" (hint: no one uses it as a neck massager) because it "failed to get [her] off." She then talks to the women also looking for a new "neck massager"/vibrator and makes them far more comfortable with the fact that they're not actually buying these items to cope with neck pain.

7. When Carrie Tells Her Boyfriend She Won't Settle

Aleksandr "The Russian" Petrovsky was sophisticated, charming, and worldly, and should have been the perfect artist boyfriend for Carrie. Unfortunately, while Carrie got the excitement she wanted from the relationship, what she didn't get was "all-consuming love." Aleksandr spent more time on his art than with Carrie, and had no intention of changing his ways — which was when Carrie decided she had to end things with her Russian. Carrie's desire for the happy ending that included the perfect romance may not scream "feminist," but standing up for the life you want certainly is.

Men can pursue younger women without anyone batting an eye, so who says that older women can't pursue guys who are a few years their junior? Samantha had no qualms pursuing the much younger Smith — and ultimately found herself falling hard for him.

9. When Samantha Declared That She Was Putting Herself First

Technically, this scene didn't come about until Sex And The City: The Movie, but I'm including it since it's a continuation of Samantha and Smith's romantic arc. When Samantha realizes that her career and social life is taking a backseat to Smith's, she decides that she needs to put herself front and center. She loves Smith, but she isn't willing to give up every part of her life to be with him — because ultimately, she loves herself just a little bit more.

10. When Samantha Has Nude Photos Taken Of Herself

Samantha chooses to take naked photos to immortalize her fierce body, and that, in its own way, is a sexism-fighting act of rebellion. The world tells women that they should constantly be scrutinizing their bodies and apologizing for their appearance. Samantha says, eff that — she loves her body as it is and has no problems showing it off.

11. When Charlotte "Chooses Her Choice"

Charlotte perfectly sums up the idea that women can make different decisions and still be feminists when she gets flack from her pals for wanting to quit her gallery job to start a family. She boldly declares that she "chooses [her] choice," and reminds women that there's no right or wrong way to live — as long as you're the one making the decisions, no one has the right to judge.

When it was on the airwaves, Sex and the City was ripe with thought-provoking and important moments — and, most significantly, it reminded women that their lives are their own. That's a message the entire world needs to hear.

More like this
Sandra Bullock, Girlboss Extraordinaire
By Matt Harkins & Viviana Olen
Kaley Cuoco & Tom Pelphrey Just Made Their First Public Appearance As A Couple
By Hugh McIntyre
The 'This Is Us' Finale Featured An Adorable Season 1 Jack & Rebecca Easter Egg
By Grace Wehniainen
Twitter Is In Tears After *That* Jack & Randall Parallel On 'This Is Us'
By Grace Wehniainen
Get Even More From Bustle — Sign Up For The Newsletter