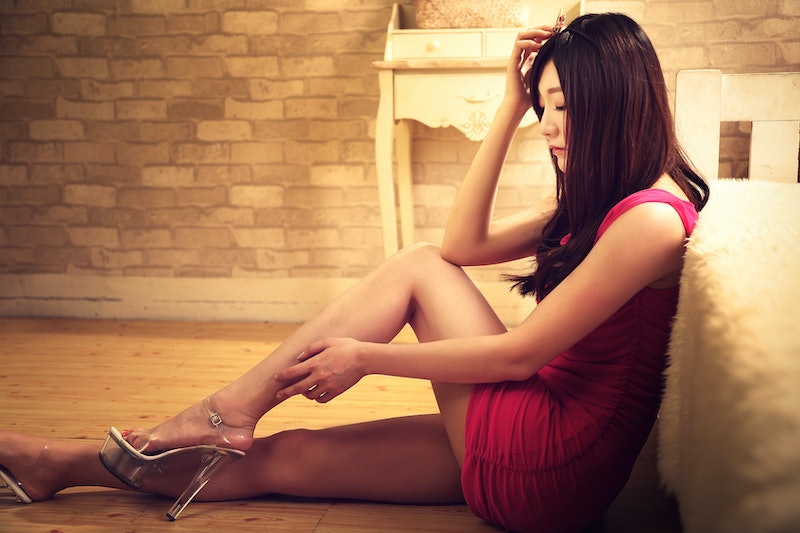 If you know someone who has been through trauma, the last thing you want to do is remind them of the experience. Unfortunately, avoiding common triggering phrases is often easier said than done, not least because they vary from person to person. If you're at all familiar with the feminist side of the Internet — and probably even if you're not — chances are you've run into the concept of trigger warnings, or their alter ego, the content warning, at some point. Based on the idea that negative reactions can be brought about by certain experiences that evoke trauma, trigger warnings are used to notify survivors of potentially disturbing content ahead.

Trigger warnings aren't perfect; by definition, triggers are extremely personal, as they reflect someone's traumatic experience strongly enough to cause a negative reaction. Anything from the smell of an abuser's cologne to the carpet pattern in the room where someone was assaulted can evoke a strongly negative reaction. Triggers vary from person to person, and it's impossible to predict with complete certainty what may cause a flashback. As a result, trigger warnings have faced a substantial amount backlash in recent years: Some call for more extensive warnings to be used, while others claim this threatens their intellectual freedom.

Whether you think trigger warnings are useful or not, there's no denying that triggers themselves are well-documented in psychology, and some phrases are more likely to evoke a flashback than others. Of course, this is by no means an exhaustive list; triggers depend on the circumstances of a traumatic experience, and what triggers one person may have no effect on another. The best way to avoid triggering someone is to ask them what their triggers are. However, it never hurts to avoid the following phrases around a survivor until you know otherwise.

Among other things, emotional abuse is characterized by routine humiliation and outbursts of anger. If a woman is a survivor of this kind of abuse, chances are she has had countless gendered insults thrown at her, and they may give her a flashback.

If someone has lived through a terrorist event or war, you'll probably want to avoid bringing up topics like terrorism unless they do so themselves.

Self-harm is often a coping mechanism for other problems going on in someone's life — often, the kind of problems that cause post-traumatic stress disorder. The topic of self-harm, along with the phrases associated with it (knives, needles, and so on) could be unexpectedly triggering for some.

Ironically, "trigger" itself has been pointed out as potentially disturbing for people who have been through things like police-related violence. Everyday Feminism, for example, uses the term "content warning" for that reason. Other similarly tricky topics may include bullets, guns, and other war-related terminology.

Needless to say, words used to describe traumatic experiences are likely to remind someone of their trauma. Chances are they're intimately familiar with hearing the words, but catching them off guard by suddenly bringing up rape isn't the best conversation tactic. Again, however, triggers are incredibly specific, and there's no way to tell if any of these may cause a loved one emotional harm unless you ask. Fortunately, it's a pretty easy solution, and chances are they'll appreciate the gesture.

More like this
Hannah Brown Got Candid About How ‘Bachelorette’ Fame Led To Drinking Issues
By Brad Witter
6 Abortion Advocates To Follow On TikTok
By Sara Youngblood Gregory
TikTok’s Favourite Razor Brand Has Launched Into Wellness
By Tomi Otekunrin
How To Protect Your Digital Privacy If You Need An Abortion Post Roe v. Wade
By Kaitlyn Wylde
Get Even More From Bustle — Sign Up For The Newsletter