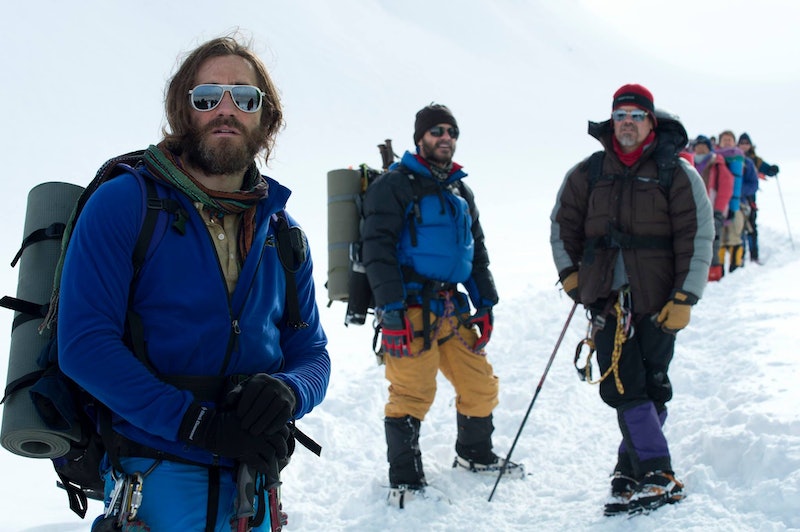 Hollywood frequently takes on true stories about heroism, civil rights, war, and disaster, so it made sense that the deadly events of the 1996 disaster on Mount Everest got the movie treatment in 2015's Everest . Jake Gyllenhaal, Josh Brolin, Jason Clarke, and Michael Kelly starred in the true life adventure hit, that told a slightly fictionalized version of what happened when a strong blizzard hit climbers on Mount Everest, causing eight deaths and inspiring legends. The movie, which is now out on DVD, has yet to be added to Netflix streaming, so, while adventure junkies await the movie to hit the web, here are some other true story movies on Netflix perfect for people who liked Everest.

There is no shortage of films about mountain climbers on Netflix, despite Everest's current absence from the site. Perilous peaks of nature are, it turns out, great source material. That said, Everest isn't just a movie about a mountain. It's about a group of men and women (but mostly men) who rely on each other to survive nature's challenges. With that in mind, here are seven movies about true stories of survival to watch on Netflix.

This documentary details the events of Aug. 1, 2008, when 11 climbers died on K2 — the second highest mountain in the world.

Another pseudo documentary, Touching the Void re-creates the climb of Joe Simpson and Simon Yates, who were separated while attempting to climb Siula Grande in Peru.

Witness a retelling of Tenzing Norgay and Edmund Hillary's historic climb of Mount Everest in 1953, mixed with some recreated footage, in Beyond the Edge.

Switching gears from Mount Everest, Maidentrip is a documentary that follows 14-year-old Laura Dekker's adventures as she attempts to break records as the youngest person to sail around the world.

The first movie on this list not inspired by a true story (hopefully), A Lonely Place to Die is a thriller about mountain climbers who stumble upon a kidnapped girl, essentially buried alive, and must run from her kidnappers.

Robyn Davidson walked 1700 miles in 1997 with only a dog and four camels to keep her company. Almost 20 years later, Davidson's story hit the big screen in Tracks, starring Mia Wasikowska and Adam Driver.

Allegedly based on a true story (the specifics are unknown), The Way Back was adapted from Slavomir Rawicz's controversial book, The Long Walk , about a group of men who escaped a Russian prison in Siberia, and embarked on a trek to freedom through the wilderness.

If watching these movies doesn't satisfy your craving for Everest, well, then, maybe you should try climbing mountains for real, or, at least, go to a rock climbing gym or something.

More like this
What’s New On Netflix: A Victoria Justice Rom-Com & The Return Of David Letterman
By Arya Roshanian
What’s New On Netflix: The Return Of 'Bling Empire' & A Rebel Wilson Comedy
By Arya Roshanian
Michael & Kathleen Peterson’s House From ‘The Staircase’ Has New Owners
By Kadin Burnett and Kayla Blanton
8 LGBTQ+ TV Shows & Movies Like 'Heartstopper' To Watch On Netflix
By Alyssa Lapid
Get Even More From Bustle — Sign Up For The Newsletter