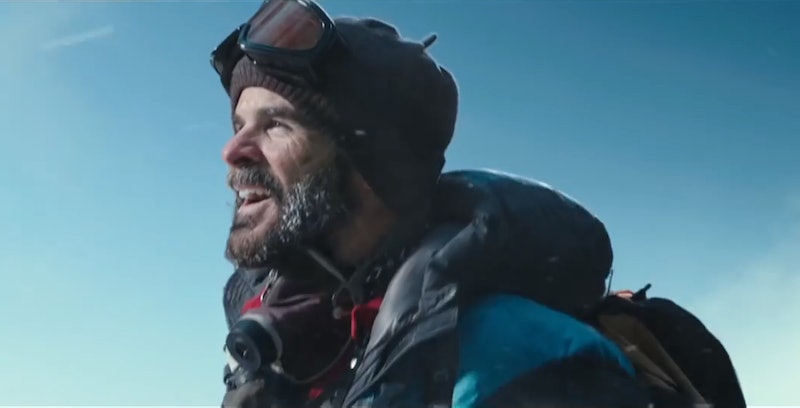 It's not every day that House of Cards' Michael Kelly plays you in a movie — but Jon Krakauer, the journalist who chronicled his harrowing experience surviving the 1996 Mount Everest Disaster in the bestselling novel Into Thin Air, lived that experience with the new movie Everest. Thanks to the actor, Krakauer, whose account of his ascent of Everest in May of 1996 was one of many accounts that helped form the screenplay for Hollywood's newest blockbuster, Everest , got the big-screen treatment. Yet although Krakauer has stayed in the public eye ever since Into Thin Air, he had little to no involvement with the film, and has yet to meet Kelly. As the author of the most well-known account of the Everest Disaster — Into Thin Air was adapted into a made for TV movie, Into Thin Air: Death on Everest, in 1997 — many are wondering, what does Jon Krakauer think of Everest ?

The answer appears to be: not much. While Krakauer's book certainly inspired Everest director Baltasar Kormákur and writers William Nicholson and Simon Beaufoy, Kormákur has been adamant that the film is not based on any one narrative. As a result, Krakauer was never really involved in the film — as Kormákur put it in an interview with Outside Magazine, "Krakauer was not contacted directly. Into Thin Air is a great book, but it's about a writer who goes up a mountain. [Our movie] isn't about a single perspective."

Update: On Sept. 25, Krakauer told the LA Times that he'd seen Everest, and considered it to be "total bull," adding that "anyone who goes to that movie and wants a fact-based account should read Into Thin Air."

The actors agree with Kormákur. "We all have varying accounts of what happened on this very same trip. And we all believe what we want to believe. Our script is a mash-up of many of these stories," Michael Kelly told USA Today, adding that he had not yet had the opportunity to meet Krakauer.

Krakauer has yet to comment on the film or promote it, unlike fellow climber Beck Weathers, who attended Everest's premiere alongside Josh Brolin, who portrays him in the movie. He did, however, recently open up about his trip to Everest when asked by an 11-year-old climber if he had any tips for climbing the famous mountain during an interview with HuffPost Live.

"Climbing Mount Everest was the biggest mistake I've ever made in my life. I wish I'd never gone. I suffered for years of PTSD, and still suffer from what happened. I'm glad I wrote a book about. But, you know, if I could go back and relive my life, I would never have climbed Everest," Krakauer said.

Whatever Krakauer's motivations, he appears to have thoroughly decided not to discuss Everest. Other climbers who survived alongside Krakauer in 1996 have taken the opportunity to tell their own version of events, separate from Krakauer's Into Thin Air. Sandy Hill, who survived the 1996 Disaster with Krakauer, for example, is seizing her chance to speak out about her portrayal in Krakauer's Into Thin Air, claiming Krakauer caricatured her into a villainous, vain and entitled New York socialite who climbed Everest on a whim.

"This came from a source who had a vested interest in crafting a dramatic story. I guess it served a purpose for him to bury me," Hill told the New York Post of her portrayal in the book, and now, in the Hollywood film.

However accurate or inaccurate Everest is, one thing is for sure: every single survivor of that 1996 disaster will likely have a different story to tell.