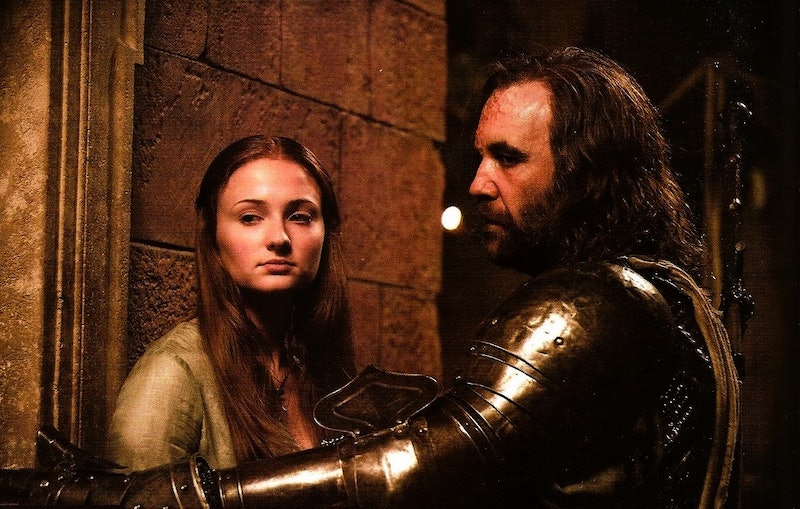 In the 50 episodes that have aired so far of HBO's Game Of Thrones, we've pretty much seen it all: fire-breathing dragons, ice zombies, shadow babies, incest twins, red weddings, purple weddings and a skull smashed like a watermelon. (RIP, Oberyn.) So you'd be forgiven if, as the fantasy series enters its sixth season this spring, you're starting to forget some of the finer details from years past. Even poor, noble Ned Stark feels like a distant memory at this point — who can remember the names of every character who's come and gone since then and every minor plot twist that has occurred? In that vein, here are 16 moments from Game Of Thrones Season 2 that you've probably totally forgotten about.

Of course, I'm not talking about the big moments. Everyone remembers the dramatic explosion of that green wildfire, or the Battle of the Blackwater that ensued — the largest full-scale battle on the show at that time. And I'm sure none of us will ever forget the sight of that shadowy demon crawling out of Melisandre's birth canal anytime soon. No, I'm talking about the nitpick-y details; the threads that are important when weaving the tapestry of the show, but you never remember when you step back to take a look at the whole product.

How many of these 16 moments do you remember?

Oh, oh, look! It's that old white dude, Whatshisname, uh… Um… Yeah, I got nothin'. If you don't remember this particular old guy, that's OK; he was only in one scene. His name is Maester Cressen, and he basically existed to introduce the conflict between Stannis/Davos/Melisandre before he attempted an ill-advised poisoning of the Red Priestess and only succeeded in poisoning himself. Good job, dude.

After Season 1 ended on the rousing, climactic note of Dany's dragons being born, what exciting plot did the show have in store for her in Season 2? Wandering aimlessly through the desert for half the season, as it turns out — she wouldn't even enter Qarth until the fifth episode. Admittedly, George R.R. Martin's second book only contains five Dany-centric chapters (compared to 10 in the first), so her storyline was already light going in.

The first time we met Theon's sister Yara (aka "Asha" in the books), we didn't know she was Theon's sister… and neither did he. As they rode up to his family's castle, they shared a most un-sibling-like bonding moment, as Theon fondled the pretty young woman sitting in front of him. Yara was amused. We were not.

Of course, things didn't turn out so well for Renly in the end. But at least he got to drop this sick burn on his stodgy older brother before he succumbed to shadow-stabbing-by-smoke-baby.

The Essosian city of Qarth is probably one of the most bizarre locations Game Of Thrones has ever visited, as exemplified by Pyat Pree and his super-creepy warlock #squad. Of course, they proved to be pretty much the most ineffective warlocks in history, as they didn't seem to understand that kidnapping loyal fire-breathing dragon babies away from their mother was a bad idea.

Nothing to see here, move along.

7. This Other Old Guy

No, not that one standing next to mopey Jon Snow. The one in front of them. That old white guy with a beard is Qhorin Halfhand, the badass Night's Watch ranger who showed up to go on a scouting mission with Jon Snow, only to get himself captured. And then basically commit suicide on Jon's sword so Lord Snow could successfully infiltrate the wildlings. Ringing a bell? No? Eh, forget it.

Honestly, Joffrey got slapped so many times that they all started to run together. This particularly satisfying smack came after the sniveling boy king incited a riot in the streets of King's Landing, getting many people in his royal retinue killed. A well-deserved slap, I say.

9. This Totally Different Other Old Guy

THERE ARE SO MANY OF THEM. This guy is Rodrik Cassel, the Master-at-Arms of Winterfell. Like the other two Old Guys™ on this list, he's also most notable for his gruesome death scene, in which he was beheaded by Theon after the ungrateful Greyjoy captured the castle. (Of course, Theon was just as bad at beheading as he was at everything else, so he ended up having to literally kick the guy's head off.)

Season 2 was the year of Jaime Lannister Sitting In A Cage. What a waste of Nikolaj Coster-Waldau's ridiculous charisma. He got one good scene where he delivered a monologue to his young cousin and then promptly murdered him in a (foiled) escape attempt. But that was pretty much it.

Game Of Thrones is famous for taking unlikely pairs of characters and teaming them up. (Think: Jaime/Brienne, Arya/Hound, Brienne/Podrick.) But one of the best dynamic duos was undoubtedly the unexpected pairing of Tywin Lannister and Arya Stark — all the more thrilling for not being based on Martin's novels.

Remember that time we all thought Bran and Rickon were dead for one whole week? On the one hand, it was a relief to find out that the two youngest Stark children were still alive; on the other, that twist still meant that Theon had murdered two young boys. Does it really make it better that they weren't Starks? Answer: No. No, it doesn't.

What's that? You really don't remember this scene at all? Well, there's a good reason for that: it was cut from the episode. That's a deleted scene in which Dany's handmaid Doreah strangles Dany's other handmaid Irri when Irri catches her kidnapping Dany's dragons for Xaro Xhoan Daxos. It certainly makes the season finale revelation of Doreah's betrayal feel less random.

Season 2's penultimate episode, "Blackwater," is (rightfully) remembered for its wildfire explosions and epic battle scenes. But while all of that was going on outside the walls, the inside was a different story as Cersei Lannister held court over her terrified handmaidens and other noble ladies — including Sansa, whom the increasingly inebriated Queen proceeded to emotionally torment over several glasses of wine.

Before "Arya and The Hound," there was "Sansa and The Hound." Long before Sandor Clegane would ever meet up with the younger Stark girl in the Westerosi wilderness, he first had an affinity for her older sister. He offered to take her with him when he fled King's Landing, frightened off by the fires of battle… but she was too scared to take him up on it and (foolishly) stayed behind.

"Yo Theon, I'm really happy for you, Imma let you finish but... Actually, no I'm not." The rousing, pre-battle speech is such a tried-and-true staple of the fantasy genre — but leave it to Game Of Thrones, master subverter-of-expectations, to cut Theon's short. Just as it seems that the inept Greyjoy is actually managing to do something right and rally his troops for battle… THWACK. Hilarious.

If you remembered all 16 of these moments… well, good for you. But, if you found yourself scratching your head, perhaps it's time to revisit the earlier seasons of Game Of Thrones before Season 6 premieres this April.