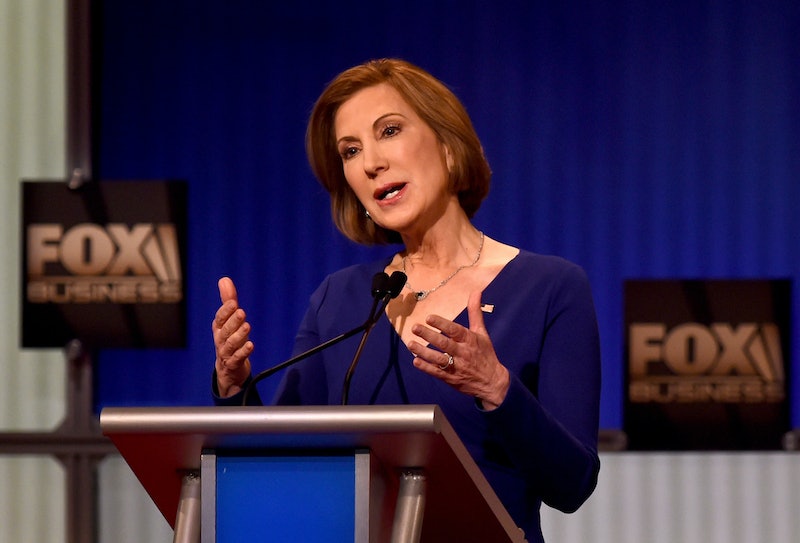 On Thursday night, the distant trailers in the Republican presidential field took the stage for Fox News' undercard primary debate. And when it was all said and done, nothing significant enough happened to shake up the GOP race. In other words, just one more slightly sad standoff between the candidates who've sunk to the bottom of an overstuffed field. And with the Iowa caucuses just around the corner, it's possible that we won't see some of these folks again ― so why not read Carly Fiorina's closing statement now, while you have the chance?

It may sound a little cruel, sure, with the first real day of voting not yet upon us. But despite how long some of these long-shot campaigns have lasted, after the caucuses of Feb. 1, the writing will be well and truly on the wall. Whether you like it or not, we're going to lose some of these familiar faces, and with her national polls placing her in ninth place nationally at just 2 percent, Fiorina is as likely a candidate as any to be gone by the time the next debate goes down. So, how did she decide to close out what could be her last debate on the national stage, for this cycle at least?

In over 150 events, I have come to know and love the people of Iowa. And the people of Iowa know what the rest of Americans have figured out: This ain't working anymore. The government no longer works for those who pay for it. The professional political class says and does whatever they need to do to win ... We need to return to a citizen government. That is why I'm running for President. The media, the establishment, they all want to tell you this election is over, they know who's gonna win it. Except that you haven't cast a single vote yet. So, people of Iowa, stand with me, fight with me, caucus for me. It is time to take our country back.

You at least have to give Fiorina this much: She's by far been the most successful, polished, and effective of the JV debaters, even using her success in the first Fox News undercard debate last August to vault herself onto the main stage. While some main-stagers like Huckabee and Christie ultimately slid down, none of the other original undercard candidates managed to fight their way up. For a brief time, there was even some serious chatter going about Fiorina becoming a national contender.

But it didn't last long ― by the time January rolled around, her numbers had already tumbled back to Earth. At present, she's polling at just 1.6 percent in Iowa, which puts her in 10th place with just days to go until the caucuses. She's trailing Donald Trump, Ted Cruz, Marco Rubio, Ben Carson, Rand Paul, Jeb Bush, Chris Christie, John Kasich, and Mike Huckabee. In other words, the political buzzards are circling, and this could end up being the last closing statement she'll be delivering anytime soon.