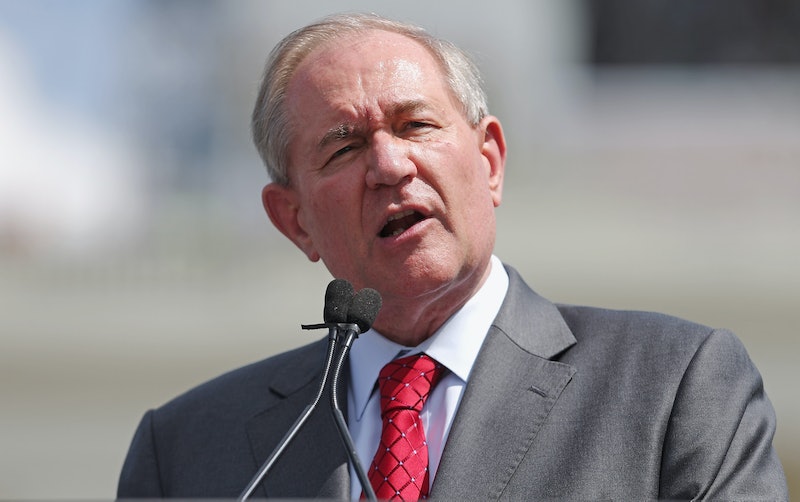 For those tuning into Fox News' undercard debate, an unfamiliar face is currently puzzling the hell out of viewers — who is Jim Gilmore, and when did he manage to wander on stage? The rest of the debate is filled with the usual (albeit underperforming) suspects: Carly Fiorina, Mike Huckabee, and Rick Santorum. They all are, at the very least, household names we've come to expect at the debates. But Gilmore, who has kept his campaign under the radar to the point of practical secrecy, managed to qualify for the debate in a last-minute upset that seems to in fact only be upsetting (or confusing) viewers.

Despite the fact that this is the first time many voters have even heard of the guy, Gilmore told MSNBC that he's confident that he is "going to be the President of the United States." Gilmore served as governor of Virginia from 1998 to 2002, but has a string of unsuccessful bids for reentering politics since he left the governor's office. He held equally hushed campaigns for the Senate and presidency in 2008, and was defeated in both races.

So why run now? In an interview with the Atlantic, he said that he was called to run for president because of our country's supposed "march of socialism." Really though, despite a momentary spike in Google searches, it looks like Gilmore will be marching on home after tonight's debate ends. A very confused Twitter agrees:

So if nothing else, at least Jim Gilmore became a meme tonight! Maybe he can put that on his next presidential campaign slogan.