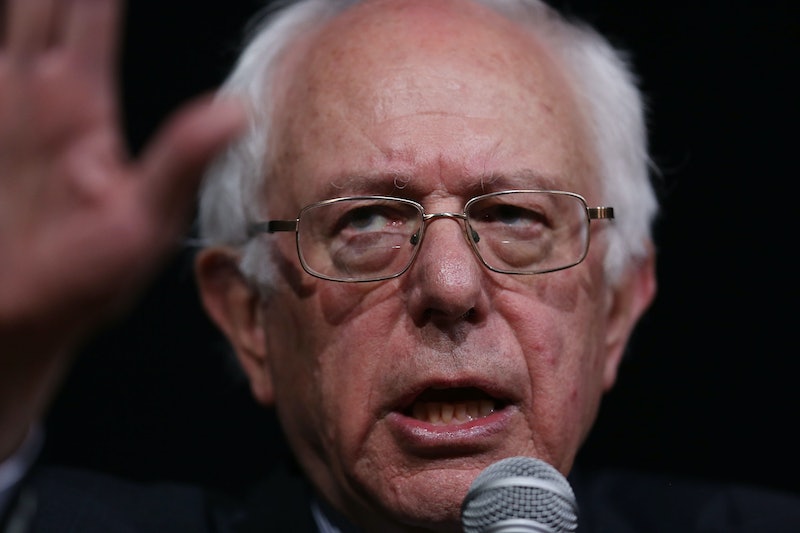 Just because he wasn't on the stage on Thursday evening, it doesn't mean you couldn't get Bernie Sanders' opinion. Not only do you look forward to his truthful commentary on the state of the economy, higher education, and foreign policy during the debates he actually participates in, but the Democratic candidate hasn't been shy about weighing in on the Republicans' offerings. So during Thursday's debate, the final one before the Iowa Caucus, it was slightly surprising that Bernie Sanders' GOP debate response was to, uh, ignore it completely and focus on his voters instead.

Although there are no more Democratic debates before the Iowa Caucus, it seems that Hillary Clinton's camp is ready to call for more. In response, Sanders responded Wednesday night: "Sen. Sanders is happy to have more debates but we are not going to schedule them on an ad hoc basis at the whim of the Clinton campaign. If Secretary Clinton wants more debates that's great. We propose three additional debates. One in March, April and May and none on a Friday, Saturday or holiday weekend. And all of the three Democratic candidates must be invited. If the Clinton campaign will commit to this schedule, we would ask the DNC to arrange a debate in New Hampshire on Feb. 4."

But even if Sanders doesn't call another debate in time, that won't stop him from weighing in. The Democratic candidate hasn't been reluctant to offer his thoughts on how the Republicans perform. According to The Hill, the most retweeted response to early August's GOP debate belonged to Sanders. "It's over. Not one word about economic inequality, climate change, Citizens United or student debt. That's why the Rs are so out of touch," Sanders tweeted on Aug. 7. The tweet received over 20,000 retweets.

In Thursday night's debate, however, it seems that Sanders was honed in on the voters at his own rally. The Vermont senator was instead trying to reinforce his own momentum.

Sanders' complete snub of the GOP debate shows that he's focused on his own primary campaign and not the other party's. That could mean that he's pretty unaffected by what they have to say about him in general, or that he knows that most of the GOP assumes his opponent Clinton will actually clinch the nomination, an assumption he clearly doesn't believe in.